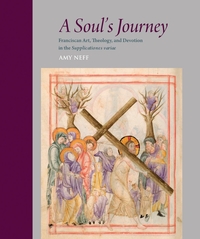 Students of the medieval Franciscan tradition have so many sources available to them now because of the abundance of materials that have been discovered and analyzed in the recent decades, such as theological texts, biblical commentaries, spiritual treatises, sermons, and works of art. Much of this material was written by and for the friars and the Poor Clare Sisters. We have extensive knowledge of the theology and spirituality of friars, nuns, theologians, and philosophers in this time period, but we do not have this information for the common person. This was an age that has been defined for so long as the time in which the common person was capable of engaging only in the spiritual life by reading simple manuals of spirituality (such as Vita Christi texts) and art (most often called the "bible of the poor").

Amy Neffs' A Soul's Journey: Franciscan Art, Theology, and Devotion in the Supplicationes variae provides an outstanding guide to the world of the common person, in this case a wealthy young aristocrat, whose spiritual education included the reading and the writing of this splendid prayer book. Neff identifies the author as Manuel, the date of the manuscript is circa 1293, and the location is Genoa. The manuscript (Florence, Biblioteca Medicea Laurenziana MS Plut. 25-3) is divided into three drawings ("Hand of God," "Man as a Microcosm," and "Measure of Christ"), the calendar of months, forty-five drawings that contain thirty-three scenes from the life of Christ, and twelve devotional images that appear at the end of the book. A Soul's Journey includes all of these illustrations. The ten chapters of A Soul's Journey supplies the reader with the background and an interpretation of these sections of the Supplicationes variae. Neff's book provides an interpretation of the rich symbolism that fills his manuscript.

A Soul's Journey is important in so many ways to the world of medieval Franciscan studies and medieval spirituality in general. Unlike other devotional works of the late thirteenth century, this manuscript provides an array of medieval spiritual texts: "Office of the Virgin," "Hours of the Passion and Cross," "Office of the Dead," Marian devotions, sermons, and other religious hymns and essays. Neff's expertise of the time comprehensively demonstrates the uniqueness and the exceptional value of this Lauranziana manuscript. Her knowledge of the art of the period provides a panoramic view of the medieval art that may have influenced the artist of this manuscript

A Soul's Journey is a spiritual compilation of Franciscan theology and spirituality. It demonstrates how an educated person who was inspired by the Franciscan tradition can engage in all levels of spiritual activity: private prayer and reading, viewing images, and daily vocal prayer, which ultimately leads to contemplative prayer. Supplicationes variae was written as a spiritual guide to inspire the reader to engage in all types of spiritual reflection and activity that can lead one from the earthly world to the world of paradise. The manuscript ends with an illustration of Michael the Archangel, who leads souls to God.

Using the book's title, Neff proves how Bonaventure's theology was the principal inspiration for this manuscript, especially as it relies on the Seraphic Doctor's The Soul's Journey into God (Itinerarium mentis in Deum) and The Tree of Life. Neff's investigation into the meaning of the manuscript shows how many of the themes of Bonaventure's theology are manifested: a theology of the Word (unspoken in eternity and spoken in creation); vestige theology with Christ as Exemplar; Christ as Center (of the Trinity, the universe, and the soul); a Christocentric theology of creation and redemption; a rich theology of the cross; an emphasis on the humanity of Christ; and a theology that explains the divine plan of emanation from God in creation and the return to God in salvation. Because Bonaventure's writings give us a principal way of knowing Francis of Assisi, Neff also focuses significant attention on Francis' experience, especially the focus on his conformity to Christ, which is what Neff wants us to experience.

What intrigues this reviewer personally is how thirty-three scenes from the life of Christ reflect the Christology of Bonaventure's The Tree of Life and subsequent late medieval Vita Christi texts. As we see in one of the most comprehensive Vita Christi texts of the fifteenth century, the Vita Christi of Isabella of Villena (d. 1490), this section begins with scenes of the Virgin Mary (the Annunciation and Visitation; Isabella begins with Mary's birth from Joachim and Anne and ends with the Assumption of Mary and the Last Judgement). As with other Vita Christi texts, the text focuses on the nativity of Christ, essentially skips the ministry of Jesus, and then presents the many scenes from the passion, death, and resurrection of Christ. The Franciscan influence on this manuscript is shown in its focus on the humility of Incarnation and the charity of passion exhibited in so many Franciscan texts and art of the thirteenth century and beyond. The Mariology of these texts reveals that the Virgin Mary acts as bookends to a book dedicated to the life of her son.

A Soul's Journey is an excellent guide into the world of medieval Franciscan spirituality. It does what the manuscript intended: to provide its readers with a map of the spiritual journey from this world to the next through text and image. Neff teaches us about the art of the medieval ages, not only as found in the Supplicationes variae and other manuscripts but also the medieval art in general. She awakens us to the influence of Franciscan theology, especially that of Bonaventure, on the common person of the late thirteenth century. There is much to learn about the spiritual and liturgical literature available to persons of this period. Above all, we see how the Franciscan tradition was not a static reality but one that continued to grow and develop, making A Soul's Journey an extremely valuable book to contemplate.