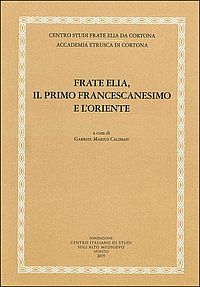 One of the most controversial figures in the early history of the Franciscan movement was Brother Elias (c. 1180-1253). He was the first provincial of the Holy Land (1217-1220), the second vicar of St. Francis (1221-1227), and the third minister general of the Order (1232-1239). Tradition has attributed to him the first announcement to the world that Saint Francis had received the stigmata of Christ in September of 1224, just two years before he died. Elias was instrumental in the transferal of Francis's body from the Church of San Gregorio (where Santa Chiara is now) to the newly constructed Basilica of Saint Francis just outside the city walls of Assisi (1230). He is recognized as the main "engineer" - in the medieval sense of the term - of the Basilica that served as Francis' shrine.

He is also known negatively in history primarily because the Franciscan chronicler, Salimbene di Adam, in his Cronica (Liber de Praelato (part II, ch. VII) made thirteen detailed charges against Elias, based primarily on his preference for lay-brothers. Other spiritualist-leaning writings of the early Franciscan movement also were very negative toward him, especially for his laxity in the vow of poverty, worldliness, and lack of humility while in office. He was excommunicated twice by popes (Gregory IX in 1240 and Innocent IV in 1244) mostly because of his political involvement with Frederick II, the Holy Roman Emperor.

For the people and church of Cortona, he is honored because of his part in the building of the Chiesa di San Francesco and the accompanying cloister. He died in 1253 and is buried in the sacristy of San Francesco. He is honored also because of travels to the east, the Levant, and how his legacy connects that part of the medieval world with Cortona. It is in the context of Cortona that Frate Elia, Il Primo Francescanesimo e L'Oriente was written. As the title indicates, the volume is focused on the legacy of Elias regarding the medieval Franciscan presence in the east - the Orient.

The foundational event for the Franciscans going to the East is the gathering of friars at the Portiuncula in 1217, when they subdivided the Franciscan Order into eleven provinces. The farthest eastern province was the Province of Syria (which included the Holy Land). Friar Elias was selected to govern over the friars of that region - a region very important in Franciscan history because of Francis' visit with Melek-el-Kamel, the nephew of the Grand Sultan in 1219.

Four of the essays of this volume are historical in nature. Guilia Barone's essay "Frate Elia della Siria a Cortona" focuses on Elias' choice to take the difficult mission in the territory of Syria. Barone situates this mission in the context of the various other missions of the Franciscan Order from 1217 onward. Barone also presents Elias' involvement in the leadership of the entire Order and his administration of the building of the Basilica of Saint Francis in Assisi. The second part of the essay presents the story of Elias' second voyage to the East in 1243 to negotiate a peace treaty between Baldwin II (Latin Emperor of Constantinople) and John III Doukas Vatatzes (Emperor of Nicaea), which included the marriage between Constance (daughter of Emperor Frederick II) and John III. The third part focuses on the Reliquary of the True Cross and the historical evidence that Elias may have obtained this object of devotion during this second voyage to the East.

Giuseppe Ligato ("La mancata vocazione cavalleresca di Salimbene di Adam e il ruolo di Elia da Cortona") presents the many aspects of world of chivalry and Salimbene's (and other friars') criticism of the world of tournaments, jousts, and other forms of armed entertainment in the late thirteenth century. As we know from Salimbene's Chronicle, his father Adam tried to have his son removed from the Franciscan Order to which he joined in 1238, even imposing on Frederick II to write to Elias for his intervention. This essay gives us a solid glimpse into the world of medieval chivalric entertainment and the Franciscan negative response to it.

Anna Gaspari's essay takes up the when the cult of Saint Francis was established in the region of Puglia in southeast Italy. In her article ("Il viaggio d'oltremare di Francesco d'Assisi e il suo culto mondo bizantino"), Gaspari examines the various early sources about the possibility of Francis' presence there during his life and his various journeys to the east. She speaks of the difficulty of this area because of its Byzantine-orientation and Greek as their language. The tension between the Latin Rite Christians and the people of this area prevented a solid report of the Franciscan tradition in this region of Italy until after the Council of Trent.

Secondino Gatta's essay ("I primi missionari e diplomatici francescani in Mongolia: Giovanni da Pian del Carpine, Gugliemo di Rubruck ed i loro compagni") describes the historical context of the first Franciscan mission to the Far East. He provides a commentary on the mission to the Mongols in 1245-1247 on the part of John of Pian del Carpine to Guyuk Khan (1246-1248), and much more detail on the second trip by William of Rubruck (1253-1255), whose journal was more extensive. This is an excellent introduction to these two medieval travel journals and the relationship between the papacy, the friars, and the people of the eastern Europe and the lands populated by the Mongols.

Andrea Maiarelli ("La Custodia di Terra Santa e il suo Archivo") offers a panoramic view of the material found in the "Historical Archives of the Custody of the Holy Land" in the San Salvatore Friary, Jerusalem. Maiarelli presents a systematic description of the structure and the contents of this archive to demonstrate how it is instrumental in understanding the history of the Franciscan presence in the Holy Land which was officially established in 1342.

One of the most precious treasures of the Church of Saint Francis in Cortona is a piece of the True Cross that Elias brought back with him after his mission to Constantinople on behalf of Frederick II in 1243. Two articles focus on this relic that linked the medieval Christian to the crucifixion of Jesus. Simona Giorgetti ("La stauroteca bizantina di Cortona. Aspetti storici e paleografici"), presents a historical investigation into the background to this Reliquary and its artistic characteristics and qualities regarding the images on the front piece and epigraphy on the back side. Daniele Simonelli ("Il tempietto reliquiario della Croce Santa: emergenze storico-artistiche") offers a presentation on the structure, ornamentation, and aesthetic value of the reliquary (constructed during the years 1507-1524 by Cesarino da Peruga or del Roscetto) that was restored during the years 2004-2007. The book includes photographs of the Byzantine Stauroteca and the Small Temple Reliquary of the Holy Cross.

We learn much from the article of Simone Allegaria (" In hoc signo vinces: Un frammento di breviario conservato ad Arezzo: una nuova reliquia francescana?") about the life of prayer, especially related to the recitation of the Divine Office. He introduces us to the complexity of the liturgical life of the thirteenth-century Franciscans and their use of the liturgical texts of the Roman Curia, as Francis desired of the friars. Francis did not want the friars to possess books; the exception he made was for them to utilize liturgical books for their life of prayer. He situates the fragment of the Breviary in the Church of Saint Francis in Cortona in relationship to the other Breviaries that are still extent in various places like the Sacro Convento library and Santa Chiara in Assisi.

Simone Allegria's second essay "La compagnia della Croce Santa in S. Francesco a Cortona e i suoi capitoli cinquecenteschi" presents a historical survey of the sources for our knowledge of Elias' trip in 1243 to the East in which he brought back relics that are on the main altar in the Church of Saint Francis in Cortona. The article is centered on a brief history of the devotion toward the True Cross that led to the emergence of a devotional group entitled the "Companions of the Holy Cross" in the fifteenth century. He analyzes the contents of a contemporary manuscript that contains the Statutes of this devotional group and provides an edition of the twelve chapters of it.

This book is valuable for the life and legacy of Elias but also for the Franciscan presence in Cortona. There is much to learn here regarding Franciscan tradition, especially the history of Franciscan mission, manuscripts (and other valuable texts), devotion, prayer life, relics, and art.