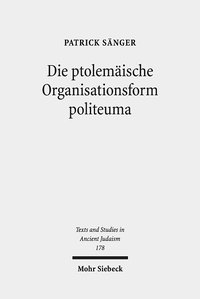 Our knowledge of Judaism in antiquity is constantly changing, as each generation of scholars poses different questions to the sources, often projecting their own time's ideas and preoccupations. The discovery of new documents, and the improvements in the interpretation of already published ones, allow scholars to develop new and better insights. Patrick Sänger's book is a welcome contribution to this dynamic field of research. Based on a series of preparatory studies, it analyses in depth the significance of the politeuma for Egyptian Jewry, and attempts to enlarge the focus to discuss the Jews of Egypt as a part of a larger Ptolemaic framework that included also other ethnic communities. In the recent footsteps of Willy Clarysse, Dorothy J. Thompson, James M. Cowey, Sänger focusses especially on the documentary evidence emerged in the past decades, namely the archive of papyri of the Jewish politeuma of Herakleopolis (P.Polit.Iud.), spanning from 144/3 to 133/2 BCE. In the footsteps of Thompson's work on Memphis, Sänger explains the politeuma as an association of military origin, gravitating around a city or a village and endowed with a cultic centre and offers parallel examples of non-Jewish cultic "associations" or "assemblies" (koina or synodoi), such as the Hermopolite Apollonia(s)tai, the Idumeans of Memphis, the military koina in Cyprus, and further associations of Achaeans, Cretans, Ionians, Thracians, Lycians and Cilicians. Sänger shows that they originated from immigrants, who, once settled in a specific location in Egypt, shared the Hellenic culture around them, but maintained a specific ethnic identity. These associations were not structured in a homogeneous way and used different Greek loanwords to indicate their internal representatives and their religious identities were connected to the respective homelands. The Jewish politeumata of Herakleopolis and Berenike in Cyrenaica were ruled by a council of archons, and some had their own sanctuary or temple district, headed by a priest. From the mention of archons in petitions from the Jews of Herakleopolis Sänger deduces that there was a synagogue community there. Traces of comparable groups with Semitic and Jewish backgrounds and connected with Persian garrisons of the V c. BCE can be found in Memphis and Elephantine.

Sänger explains the rise of politeumata as a result of a Ptolemaic settlement policy of mercenaries, a different category from regular soldiers (cleruchs). In the III c. BCE, both groups were recruited mainly from outside Egypt: cleruchs came from Macedon, mainland Greece, and Thrace; mercenaries from Asia Minor and the Levant. The politeumata can be regarded as the urban counterpart of the cleruchic settlements that were created with land grants: both show how the Ptolemies strengthened the ties between them and their army through the selective promotion of certain ethnic communities of particular military (or geopolitical) importance. Assemblies or associations (koina) could be turned into a politeuma as is the case of the Lycians, documented as a koinon in II c. BCE Alexandria (OGIS 99 = SB V 8274.4); as a politeuma in the same town roughly 250 years later. S. interprets the Jewish politeuma as a hybrid supergroup (hybride Organisationsform, p. 185 and passim). Its documented chief official, the politarches is a loanword from Greek bureaucracy of Macedonian cities. For Sänger, the politeuma did not "guarantee" to its members a certain (e.g. religious) "national" lifestyle, as they were assigned to the general category of Hellenes, but rather created the terms for a successful integration of the community within the legal and administrative framework of the Ptolemaic monarchy. Jews were classified among the "tax-Hellenes" and this also applied to other politeumata - even if only a few of them could claim to real Greek ancestry. From a fiscal and socio-political point of view, therefore, Jews did not form a separate class of population in the Ptolemaic kingdom, and there is no reason to consider the Jewish politeuma of Herakleopolis a special case. It remains unclear what role religion played in the integration of Jewish soldiers into the Ptolemaic state. In fact, unless we dismiss Josephus as fiction tout court, the documents collected in his Jewish Antiquities [1] show that Jewish politeuma in the Diaspora were legally tolerated enclaves, where it was allowed to collect Temple money, respect the Sabbath etc. Was this a development that occurred in Roman times?

As concerns the rise of this institution, Sänger rejects the old hypothesis (arduously defended by Aryeh Kasher) that took Letter of Aristeas §310 as a proof of the existence of a politeuma at Alexandria under Ptolemy II Philadelphus. Now it is widely accepted that the Letter is a literary work composed in the II century BCE to legitimise the translation of the Bible [2] and Sänger convincingly purports that politeumata rose under Ptolemy VI Philometor (180 - 145 BCE), as a response to the severe crisis of the Ptolemaic state, which had to rely on Jewish military generals and their soldiers as a weapon against Syria; the Maccabean revolt strengthened this alliance. Passages in Josephus and the Herakleopolite papyri confirm the importance of Jewish troops and the personal bond of loyalty between Jewish leaders and the Ptolemaic court at this stage. Sänger argues that such military communities did not exist outside the Ptolemaic empire, with some effort to accommodate Sidonian evidence; the lack of sources, however, imposes caution. Besides Herakleopolis, politeumata are documented in Berenike in Cyrenaica (by Roman sources), while Sänger doubts their existence in Alexandria and Leontopolis. As concerns Alexandria, even if we dismiss the Letter of Aristeas as historical source or decide to interpret Philo's reference to Jewish politai simply as "compatriots", it is difficult to believe that the major city that hosted politeumata of various nations did not have a Jewish one; the question must thus remain open. As for Leontopolis, the epigraphical evidence on the politarches Abramos from the "Land of Onias" (e.g. SB I 5765 = CPJ III 1530A = JIGRE 39) is regarded by Sänger as inconsistent, while Meron M. Piotrkowski's Priests in Exile: The History of the Temple of Onias and Its Community in the Hellenistic Period, Studia Judaica, 2019 (not in S.'s bibliography) thinks that there probably was a politeuma at Tell el Yehoudieh on the basis of additional epigraphical evidence. One should add to Sänger's bibliography also the new Corpus Papyrorum Judaicarum IV, edited by Tal Ilan and Noah Hacham, in collaboration with: Meron M. Piotrkowski and Zsuzsanna Szántó, 2020.

Sänger shows that the history of the interpretations of the Jewish communities in Hellenistic Egypt and their presumed "citizenship" as well as the history of Jewish-Christian relations have all been influenced, if not distorted, by the events of the XX century (e.g. Connelly 2012, cited at p. 225 n. 11, not in the bibliography). In particular, he addresses the problem of the status of the Jews in Alexandria before the riots of 38-41 CE (Excurse 13). The topic, however, would deserve a separate treatment in a work encompassing literary and historiographical sources as well, including the documents labelled Acta Alexandrinorum, recently edited by N. Vega Navarrete's Die Acta Alexandrinorum im Lichte Neuerer und Neuester Papyrusfunde, 2017, and with a larger focus on Roman imperial policy. For Sänger, the Jewish politeuma lost its juridical and administrative role after the Roman conquest of Egypt, and cannot be regarded as a potential cause of conflict between Jews and Greeks. Sänger rightly rejects past theories on the existence of an Alexandrian resentment at Rome's supposed concession of privileges to Jews, but accepts too easily the prevailing yet undemonstrated view that Augustus never abolished the Alexandrian boule. The "Boule-Papyrus" PSI X 1160 shows that the Alexandrians wanted back their city council and did not want any non-Alexandrian to intrude in their "pure" citizen body (significantly called politeuma in l. 5). The word, semantically ambiguous, was used to mean both "military community" and "compatriot citizens body". Sänger convincingly embraces the view that the conflict between Jews and Alexandrians in 38-41 CE did not result from the alleged Jewish struggle for "equal citizenship" or isopoliteia. Like Martin Goodman and Lucio Troiani, he interprets Philo's politeia as neither a local structure nor a form of citizenship, but the Jewish constitution, that is, the Law of Moses. He deconstructs modern explanations for the riots in 38-41 CE and forcefully rejects Sandra Gambetti's theory that there may have been fiscal reasons of conflict, linked to the imposition of the Roman poll-tax and the provincial censuses; however, he does not offer an alternative interpretation. The intricate set of conflicts in Alexandria under Tiberius and Caligula remains a complex problem, and its difficult papyrological sources surely need further discussion.

[2] S. Honigman: The Septuagint and Homeric Scholarship in Alexandria. A Study of the Letter of Aristeas, 2003.