Andrew Monson: From the Ptolemies to the Romans 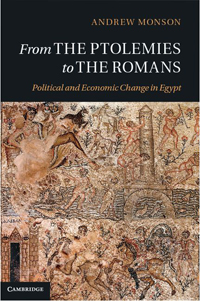 Agrarian institutions lie at the heart of the debate over economic growth in the Roman empire, and papyrus documents from Roman Egypt preserve the most detailed and abundant evidence on ancient landholding that has come down to us from antiquity. In this important book, Andrew Monson analyses documents from late Ptolemaic and Roman Egypt to study the large structural changes that make this transitional period crucial for the shape of the Roman economy up to the third century CE.

Monson sets his method admirably clearly in Ch. 1, claiming to use the neo-institutional economical approach, a branch of scholarship that has contributed to bring economic history back into the social sciences by testing general hypotheses about the role of institutions in political and economic development. In doing so, he successfully transcends the old binary categorization of primitivists vs modernists as well as the rigid trope of continuity vs change.

In the section entitled 'Evidence and Models' (27 ff), the author adopts a more benign attitude towards papyrus documents than his predecessors M. Finley and K. Hopkins, claiming that 'skepticism often underestimates the ability of historical evidence and papyrological data to lend empirical support to theories whose implications extend beyond the study of Greco-Roman Egypt'. He however admits that 'the major obstacle for this study is the relative shortage of evidence from the transitional period from 100 BCE to 100 CE'. Another equally serious obstacle is the absence of an updated study of taxation for either the Ptolemaic or the Roman period, which takes into account economic analysis.

The decline of Egyptian temples, the abolition of redistributive taxes, such as the Ptolemaic harvest-tax, the emergence of a new landowning élite in the cities of the Egyptian countryside, the gradual replacement of the traditional bureaucratic administration with compulsory public services (liturgies) are only some of the consequences of the Roman conquest of Egypt. Through a comparison with pre-industrial Netherlands and England, Monson shows that agricultural revolutions may generate real per capita growth, a freer labour market, land privatization, and fiscal incentives for capital investment that ultimately stimulate technological innovation. Monson describes the shift from Ptolemaic 'rent-seeking' office-holders, who tried to use their political influence to gain resources or privileges from the state, to 'profit-seeking' groups, who relied on agricultural intensification and the growth of impersonal markets in Roman Egypt. By using Olson's theory of 'predatory rule', he depicts Ptolemaic Egypt as a 'bandit state', where 'roving bandits plunder an agricultural community, each time taking all that they can before rival bandits can take it', and Roman Egypt as a world where the emperor taxed the community at a rate that was proportionate to his own stability and ability to receive more taxes in future (24-25). Of course not all emperors were good administrators, and something may have changed after the Antonine Plague. The notion of predatory rule did not escape the ancients, and St. Augustine (CD 4.4) tells the story of a pirate captured by Alexander the Great, who asked him 'How dare he molest the sea'. 'How dare you molest the whole world' the pirate replied. 'Because I do it with a little ship only, I am called a thief; you, doing it with a great navy, are called an emperor'.

Monson argues that the annexation and reorganization of Egypt under Augustus led to a period of prosperity and to a more sustainable fiscal regime, somehow agreeing with K. Hopkins: although 'the new Roman poll tax may have been slightly higher than its Ptolemaic antecedent [...] land taxes seem to have decreased under Roman rule' (254). The integration into the Roman empire accelerated the growth of impersonal markets that replaced state and temple redistribution; besides, Rome developed a liturgical system of administration, where landowners were compelled to undertake the provision of public services at their own expense. The creation of public record archives also enabled landowners to manage estates dispersed across many villages without necessarily maintaining social ties to each place (Ch. 4, 122-131).

The central claim of the book is that that private ownership was not introduced to Egypt in the Roman period under the influence of Roman law, as was once believed, as a substantial body of documents show that private land indeed existed in Ptolemaic times (here Monson walks in the footsteps of his teacher J. Manning, who fruitfully used recent scholarship on ancient Mesopotamia, which had similarly revised paradigms that denied the existence of private land ownership). The other major argument is that, against common opinion, fiscal reforms proved to be a much more important break with Ptolemaic institutions (Ch. 5, 184-191).

The book stimulates many more questions than can be listed in a short review. Monson depicts the Roman emperor as a figure who responded to endogenous pressure, reacted to the interests of the élites, and was often driven by them; one may wonder whether the emperor could effectively shape the economy (for a positive answer see E. Lo Cascio's contribution to W. Scheidel et.al. [eds.], The Cambridge Economic History of the Greco-Roman World, 2007). The relationship between landowning, office-holding élite, and the imperial court is also worth further investigation. Monson argues that in Egypt, like in the cities of Asia Minor, the so-called 'gymnasial group' (called in the Arsinoite nome katoikoi or 'settlers', and more restricted than the inhabitants of the metropoleis) was not a narrow élite, but a diverse and stratified cross-section of society (269). Did the gymnasial group pay the poll tax or just a reduced poll tax like the metropolitai? Monson argues that 'the fiscal privilege was ostensibly the same' (266). But what was their relationship with the tax-exempt category of the Alexandrian citizens?

This book has many merits: it explores in depth the impact of the Roman conquest on Egyptian agriculture and the economy and applies methods taken from the social sciences and modern economic analysis, as well as a comparative approach that looks at similar developments in other areas of the ancient world, ultimately showing that it is no longer possible to explain Egypt with Egypt only, and that, when used correctly, documentary papyri can be much more than a 'stupendous illusion'.