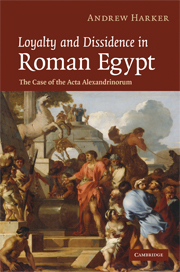 In 1954 the Church historian Herbert Musurillo re-edited a collection of all known Acta Alexandrinorum (or Acts of the Alexandrian Martyrs), and since then there has long been a need for a new study taking into consideration the newly published fragments of this fascinating literature. Andrew Harker's book must thus be welcomed as an entirely appropriate and timely work that fills a major gap in scholarship. The author must be congratulated on that.

After an Introduction, that distinguishes the "Acta Alexandrinorum proper" from an "Acta related literature", a literary genre that elaborated on older stories, Chapter 2 looks at the texts relating to the Alexandrian and Jewish embassies to Gaius and Claudius. Harker argues that the events of 38-41 led to the creation of the first Acta Alexandrinorum and provided a literary model which future writers of stories would follow. For Harker, the trial of Isidorus and Lampo, one of the most popular stories of the Acta, is to be set in 41 because it concerns the rights and status of the Alexandrian Jews, "an issue that Claudius dealt with in 41, and never, as far as we know, readdressed" (24). The Acta Isidori are regarded as literary products of the III. century, with some sections being originally written in the first century. All these texts, in Harker's view, were subject to manipulations by their authors, hence their numerous historical and chronological errors.

According to Harker (25), the Letter of Claudius to the Alexandrians on papyrus (PLond 6.1912, CPJ 2. 153) is an anti-Jewish version of an official document, as it comes from the papers of a Hellenised Egyptian, a tax official of Philadelphia (Fayum) called Nemesion, who probably sympathised with the plight of the Alexandrian Greeks. Harker thinks that the obscurities of the Letter are due to the manipulations by the copyist. He also questions (26) the authenticity of the edict of Claudius quoted by Josephus (Jewish Antiquities 19.279-85), suggesting that Josephus was responding to an argument used against the Jews by the Alexandrian Greeks, that Augustus limited Jewish rights by ending the Jewish ethnarchy. Harker also attributes the fragment of a speech of an Alexandrian ambassador requesting the restoration of the Boule (CPJ 2.150) to the time of Claudius, and not to Augustus, as was orthodox to believe (29). I find all these observations entirely convincing.

Chapter 3, "The Acta Alexandrinorum from Augustus to the Severans", looks at documents concerning Roman emperors, such as imperial letters and official acts, which were circulated in the Egyptian chora. A section examines the literature inspired by imperial visits to Alexandria, the so-called acta tôn timôn, documentary records of the honours given to the emperors by the city, and stresses that these 'documents' in fact present literary elements. Harker, for instance, compares the miracle stories concerning the arrival of Vespasian in Alexandria to the Serapis aretalogical literature that was so popular in Egypt (67). The role of Serapis as the patron god of the Alexandrian martyrs is a theme of great importance, and the author should perhaps have devoted more space to it. Chapter 3 ends with an analysis of the setting and staging of the trials of Alexandrian gymnasiarchs and prefects, in both Alexandria and Rome. Harker suggests that figures of Alexandrian martyrs, such as Paulus of Tyre, "became a stock character in the Acta [...] playing a large role in the stories set in the early second century as Balbillus had in those set in the time of Claudius" (86). Besides, he refers SB 22.15203, an indictment against a certain Postumus, to the Claudian prefect C. Julius Postumus, not to the Rabirius Postumus dioiketes of Egypt under Ptolemy Auletes (74).

As concerns form and style, Harker reiterates that, "despite their documentary veneer, the Acta [...] exhibit numerous literary characteristics and use several storytelling devices" (90). The form of the minutes is often replaced by indirect speech, and the judicial documents break into narrative. Besides, the (amazingly violent) exchanges between the emperor and the bold Alexandrians sound definitely unrealistic. The emperors are caricatured as tyrannical judges, the Jews as devious accusers of the Greeks, and the Alexandrian ambassadors, as brave and patriotic heroes, willing to die for their city. The texts emphasize their noble birth, high status and exquisite Greek culture, and, above all, their glorious deaths. This idealisation of Greek versus Roman culture, in Harker's view, may be a product of the Second Sophistic and may be compared with the feelings of Plutarch, Dio Chrysostom, Aelius Aristides and Philostratus (167ff).

In Chapter 4, Harker turns to the historical background to the Acta literature, and argues that the authors of the Acta were the ambassadors themselves, who made their own records and kept them in Alexandrian archives (although private copies were easily obtainable). Furthermore, the Acta, as well as other types of dissident literature, such as mimes and oracles, did not exist only in Alexandria, but must have been common in the city archives of other provinces, too (110). It is likely, for instance, that the Antiochenes were familiar with this literature, and possibly adapted Alexandrian models to their own purposes (128). Both cities were in fact theatre of conflicts between Greeks and Jews, and both would be interested in keeping records of the imperial pronouncements. Finally, Harker attributes the decline of the Acta literature to the extensive grant of Roman citizenship in 212, and to the rise in the 250s of a new enemy for the Alexandrians, the Christians.

Chapter 5 "Between loyalty and dissent: The Acta Alexandrinorum and contemporary literature" looks at Greek, Roman, Jewish and Christian literature on trials and martyrs. Harker notes that the Christian martyr acts are set in the period from c. 100 to the Diocletianic persecutions, roughly contemporary to the Acta stories, and argues that the Christian martyr literature filled the literary void left by the decline of the Acta (161). However, this explanation does not satisfy us completely, and the relationship of the Egyptian Christians with the earlier and contemporary stories of the Alexandrian martyrs certainly deserves further investigation.

In the Conclusion, Harker reiterates his interpretation of the Acta as highly charged political pamphlets, written to promote anti-Roman feeling in Alexandria. This literature is equally hostile to Romans, Jews, Egyptians, that is, to all non-Greek barbaroi, who are regarded as culturally, socially and morally inferior to the Alexandrians. The theatrical elements in the stories may even suggest that the Acta might have been performed publicly, exactly like the trial scenes of Philostratus' Apollonius of Tyana, commissioned by Julia Domna for the entertainment of the Severan court (176). This, according to Harker, suggests imperial toleration and even support of this literature. The derogatory portrait of Claudius in the Acta Isidori may have been conceived by a subsequent Roman emperor in order to slander his predecessor.

The book is closed by three useful Appendixes. The first is a list of the editions of the Acta Alexandrinorum and related texts, which includes the date, provenance, plate and main corrections done to the texts in the past fifty years. This part is especially valuable as it provides a complement to the texts presented by Musurillo. Appendix II is on the vexed question of "The status of the Alexandrian Jews", and Appendix III lists "The 'dubious or unidentified' fragments".

This useful, rich book has many merits. The only regret is that the Greek (and English) texts of the Acta have not been included, so that, inevitably, the readers will have to go back to Musurillo in order to read them. Besides, the part of this book dealing with the Jewish Diaspora Revolt of 116-17 would have benefited from the addition of one important bibliographical item, M. Ben Zeev's Diaspora Judaism in Turmoil, Leuven: Peeters 2005. Nonetheless, this excellent book brings to the attention of readers a very important body of texts, often neglected by Roman historians, and certainly constitutes an obligatory read for all those who wish to understand the ambiguous relationships between the Roman emperors and the Greek élites, both in Egypt and outside.