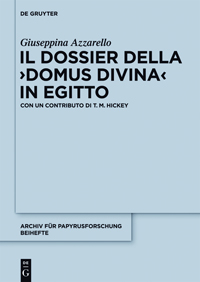 The private property of the imperial family (domus divina) is a theme of special importance for the study of the Byzantine empire. The papyri are an especially eloquent body of evidence that allows us to reconstruct some 'dark' aspects of the management of this financial department. This volume collects for the first time the papyrological dossier of documents concerned with the land of the domus divina in Egypt and its administration. It also aims to identify and analyse the administrators, localities and workers of the imperial property in Egypt.

After a preface (v-vi) and a brief introduction (1-3) the author begins the discussion of the documents. First she looks at the chronological and geographical distribution of the texts: they are all from the 5th-6th century and mostly come from the province of Arkadia (and especially from the Oxyrhynchites), while 18 come from the Thebais (especially from the Antaiopolites). They explicitly name the landowning members of the domus divina, i.e., Arkadia, Eudokia, Plakidia, Theodora and Justinian. On the death of Justinian, it is likely that, at least in the Oxyrhynchite, a part of the domus divina was managed by the family of the Apions, who perhaps also inherited part of it. Section 2 (8) briefly surveys the content of the documents, which are concerned with a variety of matters, as they preserve contracts of sale of wine, leases of immovables, leases of work, loans of money, orders of payment, receipts for the payments of rents or for the delivery of replacement materials for irrigation machines, petitions, lists of persons, drafts of imperial rescripts, letters and accounts. From this introductory part, the reader is left in the want to know more on the historical origin of the domus divina, as the author touches the topic only briefly and directs us to the old A. Masi, Ricerche sulla 'res privata' del 'princeps', Milano 1971, 96-119.

Section 3 (9-28) constitutes the bulk of the work and painstakingly reconstructs the functions and career of the administrators of the domus divina, starting from the pronoetes, the lowest in the hierarchy, all the way up to the kourator, the top administrator. The author concludes that the dioiketes supervised the properties at local level (equivalent to the old nomos) while the phrontistes (or phrontizon) worked at provincial level (17). She also connects two arabarchai (although the significance of this term is not clear), Flavios Horion and Flavios Ioannes, attested in no. 31 [1], with the homonymous duces of the Thebais that feature in other documents as the overall managers of the properties in the entire province. Three tables (29-31) offer a helpful synopsis of the administrators of the imperial estates of Arkadia and Eudokia, Theodora and Justinian, Plakidia and other members of the imperial family. Section 4 (32-39) discusses other persons who may be linked to the domus divina and concludes that in most cases they were members of the public administration, who carried out occasional business with the imperial house. Overall this part is highly technical and not an easy read, as the main text is laden with a high number of references and cross-references. It is however very useful, thoroughly researched and admirably courageous in proposing new identifications of hitherto-neglected figures and functions. Section 5 (40-49) deals with the location of the properties. The link between the domus divina and the oikos of the Apions is particularly interesting, as the documents show that the Apions collected taxes and rents on some of the imperial properties: there seems to have been a progressive decline in the imperial properties at Oxyrhynchus in the course of the 6th century, when the Apions took over the running of most of the imperial localities. The author interestingly suggests that this may have been a consequence of the role of Flavios Strategios I, the earliest-known member of the Apions, as the manager of the property of Arkadia and then Eudokia, a property that went to him on his retirement (see the introduction to no. 11 = P.Köln. XI 459). This lends further support to the thesis recently presented by Todd M. Hickey, in turn expanding on Jean Gascou's pioneering claim, that the great oikoi, such as the Apions, were responsible for collecting shares of other estates' rents, that landlords and government were not enemies but compromised, and that cash rents, not market transactions, were the main source of income of the Apions. [2] A very concise conclusion (50-52) summarises the main features of the administration of the domus divina. The final part of the book is occupied by the Catalogue of the texts, which were already published elsewhere, but are now reorganised in chronological order, and assigned new introductions that place them in the context of the domus divina. Translations would have been extremely useful, too. Section C (122ff) provides thorough concordances and indexes. The book is enriched by Appendixes. Appendix 1, by Todd M. Hickey, presents a new text (P.Bibl.Univ.Giss. 48), which casts further light on the domus divina at Oxyrhynchus, as it documents the novel administrative combination of phrontistes and agens in rebus. Appendixes 2-4 revisit parts of documents or suggest new readings.

Overall this is a very learned and useful book, which explores a very important aspect of ancient landholding, and places itself as a useful complement to the recent scholarship on Byzantine Egypt, a topic which is undoubtedly at the centre of the discussion on late antiquity. [3]