William Chester Jordan: Servant of the Crown and Steward of the Church 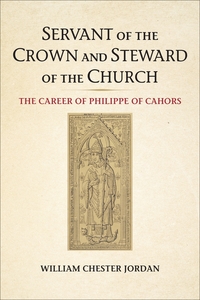 Most medieval surveys focus on prelates forced to choose between service to the crown and to their church (most famously Thomas Becket). In contrast, William Chester Jordan presents Philippe of Cahors's career as evidence of the "inner circle of Saint Louis's government, the nature of public service [...] in the reformist state he engineered, and the linkage between service to the crown and service to God in the minds of thirteenth-century elites" (5).

The subject is not entirely new. Adam Davis has convincingly argued that Eudes Rigaud successfully combined service to the crown as spiritual advisor, judge, and councillor with his duties as archbishop of Rouen and the stalwart defense of ecclesiastical rights and jurisdiction. In his Men at the Center, [1] Jordan previously utilized the depositions gathered by papal investigators preparing the case for Louis IX's canonization to delineate the king's inner circle, which included powerful noblemen, theologians, and burghers such as Simon de Nesle or Robert Sorbon. As one-time royal "chancellor" and bishop of Évreux, Philippe of Cahors may have provided key insights on the king to his Dominican hagiographers. However, Philippe expired shortly before papal delegates began collecting statements and so Jordan reconstructs Philippe's career from other surviving evidence.

Philippe's career becomes a test case for what happened when key reform agendas interacted with the quotidian logistics of secular and religious administrations. His advancement confirms a general trend of "men from the periphery" (5) seeking promotion by royal service. Philippe came from a merchant family from Cahors, a city notorious for its moneylenders. Despised as parasites by Matthew Paris and others, Cahorsins's funds bankrolled the anti-heretical crusades and local schools. Legal or theological training, or both, were considered prerequisite for service in royal, diocesan, and papal bureaucracies, and Philippe put his legal expertise to good use as an official in the archdeaconal court of the archdiocese of Reims. His arbitrational expertise brought him to the notice of local ecclesiastics engaged in lawsuits and Philippe soon exercised the functions of the pluralist and absentee Ottobuono Fieschi, then canon and chancellor of the cathedral chapter in Reims (and Notre Dame in Paris), later cardinal, papal legate, and Pope Adrian V.

Networking paid off; during peace negotiations between Henry III and Louis IX, Ottobuono perhaps nominated Philippe for service in Parlement (the high court). Although Philippe's transition from ecclesiastical to royal administration required the mastery of new particulars such as procedure, forms, and etiquette, the interesting finding is that it was far from impossible. The hard lines often drawn between church and secular courts and administration should be reconsidered, as non-resident clergymen rewarded by plural church benefices and prebends in the royal gift formed one of the pillars of Louis IX's administration. Although reformers might have decried pluralism, absenteeism, and royal gift of church posts as evidence of rot at the core, Jordan notes that Louis IX may have viewed this system as a way to prevent bribe-taking and that he appears to have ensured that worthy substitutes paid a portion of the bureaucrats' income from these positions fulfilled the spiritual and administrative duties attached to them (as had Philippe for Ottobuono).

Philippe's career in Parlement and as a royal investigator (enquêteur) casts considerable light on the negotiation of contested legal and financial jurisdictions in a period where royal, noble, urban, and ecclesiastical authorities were all attempting to position themselves as dispensers of justice and protection. The resulting altercations are fascinatingly illustrated by the contested public exhibition of executed counterfeiters and doughty peasants asserting their traditional rights (12) and seeking redress from royal enquêteurs (26-27). Philippe's labors associated him with Gui Foucois, later Pope Clement IV, and led to his "meteoric rise" to keeper of the king's seal and highest administrator of the realm, as "chancellor" in all but name. Appointed to collect the crusade taxes imposed on ecclesiastics, Philippe was named as one of the backup regents potentially responsible for administering the realm during Louis IX's absence on crusade (31-37).

However, Jordan argues that Philippe's election as bishop of Évreux was no cynical reward for a "royal" bishop. After resigning his post as de facto chancellor, Philippe combined service to his new see with continued service in Parlement and as one of the executors of Louis IX's last testament. Philippe's skills as administrator and arbiter were again put to the test as he defined and confirmed episcopal jurisdiction over the property and income needed to sustain his diocesan clergy (in opposition to competing claims by local noblemen, communes, or monasteries), over the visitation and discipline of religious houses, and over the Jews, converts, and heterodox in his diocese (46). Philippe's prior ecclesiastical and royal service meant that he moved in complementary networks of influential men including Simon de Nesle, Étienne Boileau and Henri of Vézelay, yet even Philippe met his match when dealing with the notoriously corrupt and absentee bishop of Bayeux, Pierre of Benais (41-43, 54). While scrupulously adhering to his duty to protect widows and orphans and broker fair deals, Philippe nonetheless pursued and won cases against these groups (51-52, 64) while strategically accumulating a portfolio of income-producing properties designed to support the rebuilding of Évreux's cathedral and the ministry of diocesan clergy (61-66).

Jordan acknowledges Philippe's perhaps tolerant relationship to Évreux's thriving Jewish community, a marked contrast to the extremely intolerant wider ecclesiastical and royal policies towards Jews in this period. Nonetheless, evidence for Philippe's potential involvement in the prosecution of heresy and treatment of the royally sponsored community of converted Muslims in his diocese is scant. [2] However, Jordan persuasively posits that the declaration of royal intent to found a Dominican friary in Évreux should be redated to Louis IX's pre-crusade visit in 1268. His pledge would be fulfilled by his son, Philip III, and Philippe of Cahors, as local bishop, brokered key deals which soothed the fears of the local parish clergy regarding competition from the friars for donations and services. He also acquired the land necessary for and oversaw the friary's construction. Jordan imagines a potential scenario where the influential royal hagiographers Geoffrey of Beaulieu and Guillaume of Chartres, both Dominicans, perhaps visited Philippe or retired to Évreux to write about Saint Louis (the Évreux friary was the first to be dedicated to Louis IX as saint and miracles were reported there).

As a fitting postlude, Jordan rightly subjects the epitaph on Philippe's tomb to detailed analysis. However, the reviewer wishes that the meaning of the iconography employed on the tomb of Philippe (a sketch of this graces the book's cover) for his episcopal image and self-identity had also been explored. The choice to depict Philippe as a mitred bishop holding an episcopal staff and book while trampling the devil and surrounded by royal fleurs-de-lys certainly embodies the compatibility, in Philippe's mind, of his episcopal and royal duties. Jordan's research nonetheless enables powerful comparisons between the origins, training, and service of ecclesiastical bureaucrats during the reigns of Philip Augustus and Louis IX and potentially other contemporary rulers such as Henry III of England and Frederick II. [3]

[2] William Chester Jordan: The Apple of His Eye. Converts from Islam in the Reign of Louis IX, Princeton 2019.

[3] See for example, John W. Baldwin: The Government of Philip Augustus. Foundations of French Royal Power in the Middle Ages, Los Angeles 1986; Nicholas Vincent: Peter des Roches. An Alien in English Politics, 1205-1238, Cambridge 1996. Most English-language studies of Frederick II minimize the role of bishops. In contrast, see Paul B. Pixton: The German Episcopacy and the Implementation of the Decrees of the Fourth Lateran Council, 1216-1245: Watchmen on the Tower, Leiden 1995.