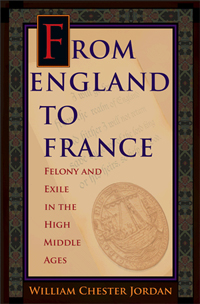 In 1212 a man called Wille Brun stood accused of murder and despite succeeding in the ordeal of water, he was told to abjure the realm. Brun was willing to find money and pledges to attest to his innocence, and claimed that no one would accuse him to his face of the murder. But it was Brun's reputation that was being punished, not the alleged crime. A central argument of William Chester Jordan's fascinating study is that judicial exile was bound up with reputation. Where the Crown had failed to convict, or trial by ordeal had proven innocence, a tarnished reputation among the local community still risked vengeance and long-running feud. In such circumstances abjuration was the pragmatic option.

Jordan explains that exiles were made up of those who, like Wille Brun, had gained a reputation for wrongdoing or those who had confessed to crimes whilst in sanctuary. A further small group of exiles had been pardoned on condition they undertook pilgrimage or crusading abroad. Rarely, abjuration was also imposed on approvers (those who had turned king's evidence) and on those who abducted children in order to decide who they married.

This is an area overdue for revision; few modern studies have dealt with the subject in any depth. Jordan estimates that at least 75,000 people abjured the realm over a 150 year period (basing this on an extrapolation from coroners' rolls and county plea rolls). Prior to Jordan's research, scholars, myself included, had underestimated the numbers involved. Whether this equates to the exile of "large numbers of the criminal population" (6) though, is difficult to say. Crime statistics in this period are notoriously difficult to establish, but this would lead to an average of 500 people per year in a population of c.5 million, where the homicide rate alone was likely to have been 5.2-3.6 cases per 10,000 inhabitants. [1]

In chapters one, two and three, Jordan examines the process of abjuration, which usually involved confessing to a crime before a coroner and then journeying to the coast to take ship abroad. Display was important here; abjurers were required to carry crosses and dress penitentially, demonstrating both their contrition and their protected status. According to the legal theorist Bracton, the abjurer had to publicly proclaim a vow "Hear this, O ye coroners, that I will go forth from the realm of England and hither I will not return save by leave of the lord king or his heirs, so help me God." (58) Jordan emphasises the public shaming here, although of course oath swearing and public ritualised performance was a central element of the law throughout the Middle Ages. Jordan also makes the perceptive point that these acts, along with possible confiscation of the abjurer's property, were intended to fix the event in collective memory.

It is interesting to think about popular perceptions of abjuration. Jordan comments that in England, there is sparse evidence for concern over fraudulent attempts at multiple abjuration, whereas on the continent concern was such that they branded abjurers with the fleur-de-lys. He also notes some attempts at vigilante justice, as well as evidence of abetting abjurers in escaping. Of course, perceptions of abjurers differed with each case. Jordan notes that women constituted as many as one in ten abjurers, and that they came from a variety of different social backgrounds. Thus attitudes towards abjuration would have been overlain with expectations of gender and class.

Jordan's close analysis of language is fascinating. The word étrangers was used to denote those who stood out in local communities. Words such as 'exile' and 'banishment' had such an evocative, enduring resonance, conjured from classical, Anglo-Saxon and biblical antecedents. It would be interesting to trace these concepts into other sources: ballads and vernacular literature, mystery plays, stained glass and wall paintings. Jordan's focus on immigrant communities and marginalised groups here is prescient; recent work on 'aliens' by W.M. Ormrod and others has opened up this new and exciting area of research. [2]

In chapter four Jordan focuses on the destination of abjurers, most of whom crossed the Channel to the port of Wissant. Jordan's evidence here is sparser, but he does range more widely into the literary and archaeological evidence. He notes that Wissant was mentioned in the epic tales of Chanson de Roland and in the Commedia, where the hell-scape of Dante's Inferno is the flat land crisscrossed with dikes around Wissant and Bruges. Jordan also points to the size of Wissant's cemetery, huge for a village of that size, as evidence of its role in hosting English exiles.

What did abjurers do once they made it to France? Jordan finds some evidence of exiles subsequently charged with involvement in criminal gangs. Jordan has a real eye for the details of these cases, and he shows how the records articulate the attitudes of the authorities. In one case, Richard the Englishman apparently confessed to robbing priests and pilgrims and to having had sexual relations with members of his gang. It would be interesting to consider the nature of the document here and the context of the inquisition before the royal court of Paris. The inclusion of such salacious details in the record might have been intended to arouse the moral indignation of a jury or a judge.

In chapter five, Jordan deals with the issue of repatriation. He suggests that whilst monarchs projected exile as an act of mercy, it still meant banishment for the poor with little chance of return. Some exiles sought pardon, claiming that fear of injustice had driven them to flee the realm. In one case a man suffocated his own baby daughter whilst carrying her on horseback. He fled to sanctuary, confessed, and abjured the realm, rather than relying on the law for a verdict of accidental death. Later in the period, some exiles promised to undertake military service on behalf of the Crown. Whether there was really "a flood" (133) of these military recruits, contemporaries certainly perceived there to be so, and repeatedly petitioned the Crown to limit the practice.

The Hundred Years War largely ended abjuration. English claims to the French throne meant that an English king would be sending his criminals to another part of his own jurisdiction. Identities also hardened; just to call another Frenchman English was now actionable slander. Internal exile to 'chartered' communities in major monastic and episcopal churches lingered on. However, 'Catholic' sanctuary privileges were phased out and finally abolished in 1623. In later ages, exile reappeared with the use of penal colonies in European empires.

Jordan's study probes the question of the philosophy that lay behind exile. Did it entail the pragmatic removal of hardened criminals, making them someone else's problem? Was it a merciful way to avoid the death penalty? Did it stem from a religious injunction to condemn criminals to wander the face of the earth? In asking these questions, Jordan makes a significant new contribution to our understanding of medieval legal culture.