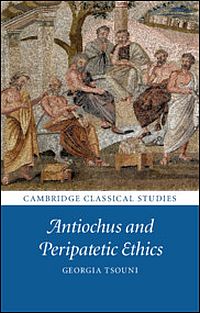 This book offers an analysis of the philosophical ideas of Antiochus of Ascalon (active in the 1st century BCE), with a focus on his ethical theory. Antiochus' original works are lost, but we can reconstruct his ethical views because they are presented in the fifth book of Cicero's De finibus (On Ends or On Goals).

Georgia Tsouni argues that Antiochus' ethical theory is steeped in Stoic philosophy, but that it is meant to be an alternative to the Stoic ethical theory. Furthermore, she argues that Antiochus appropriates Stoic views in order to show that they are rooted in a tradition that goes back, ultimately, to the pre-Hellenistic age. Antiochus refers to this tradition as the Old Academy, a denomination broadly construed by him so as to be hospitable to Aristotle and the Peripatos. The outcome of the Antiochean project is an inclusive reading of ancient ethical views that challenges both ancient and modern classifications of Greek philosophy into discrete philosophical schools.

Given the nature of the Antiochean project, Georgia Tsouni rightly resists a widespread tendency toward a reductive interpretation of the ethical account presented in Cicero's De finibus 5. For instance, she refrains from calling this account a Peripatetic theory, even though Antiochus often turns to Aristotle, who is his main source of ethical ideas. At the same time, she avoids using labels such as "eclecticism" or "syncretism" to describe the Antiochean project. By her lights, Antiochus does not select and combine views taken from different sources in order to create a hybrid account. Rather, his starting point is Aristotle's ethical theory, regarded as a philosophical development that happens entirely within the Old Academy. As a result, according to Georgia Tsuni, the Antiochean project is best described as a creative reading of Aristotle's ethics that updates old ideas in light of Hellenistic (and post-Hellenistic) debates.

The book is divided in nine chapters. The Roman context in which Antiochus is active as a philosopher is discussed in the first chapter. Antiochus' views on the history of philosophy are presented in the second chapter. This chapter elaborates on Antiochus' attempt to return to the so-called ancients (veteres, antiqui) and his construction of a philosophical tradition in which there is room not only for Plato and Aristotle but also for the Stoics. It is precisely because Antiochus considers Stoic philosophy a development of Academic ideas that he is able to appropriate some of their most distinctive views. I have in mind the doctrine of oikeiôsis, which is native to the Stoic tradition but is adapted to a Peripatetic context. Antiochus interprets it as a species-specific tendency toward nature. As such oikeiôsis is conceived as a natural principle that controls our ethical development from non-rational animals to rational agents.

The remaining seven chapters offer a close study of the argument unfolding in De finibus 5. This argument takes the form of a developmental account shaped by oikeiôsis. These chapters will be most useful to a reader who would like to engage in a close study of De finibus 5. This reader will find a full discussion of the particular version of the oikeiôsis argument that Antiochus ascribes to the Peripatetic, as well as an analysis of the initial starting point of our ethical development, namely the non-rational impulse of self-love. This reader will also find a detailed discussion of how self-love promotes a natural development of the virtues of the body and the virtues of the soul. Antiochus regards both kinds of virtues as constitutive elements of human nature and as such essential to the achievement of a happy life. A discussion of social oikeiôsis and the Antiochean conception of the happy life are offered in chapters 7 and 8. The final chapter is concerned with the biological significance of oikeiôsis in animals and plants. Georgia Tsouni shows that Antiochus is seriously engaged with Peripatetic (both Aristotelian and Theophrastean) natural philosophy, which he regards as an important tool in the promotion of his distinctive form of ethical naturalism.

The findings reported in the final chapter should be combined with what we read in chapter 6, where we learn that Antiochus adapted an Aristotelian argument from the now lost Protrepticus. Taken together, these chapters show that Antiochus had a good knowledge of the writings of both Aristotle and Theophrastus. In all probability, he could read these books in the library of Lucius Licinius Lucullus, who was his patron in Rome. Cicero himself describes this library in the third book of the De finibus, where he stages himself as visiting this library in search for some Aristotelian treatises (commentarii). [1] All this suggests that the Antiochean project of recovering the wisdom of the ancients is grounded in a strong interest, and indeed a careful study, of Greek philosophy - most notably, Peripatetic philosophy as transmitted in the school treatises of the Peripatos.

The book originated as a PhD thesis at the University of Cambridge under the direction of David Sedley and Malcolm Schofield. The transition from thesis to book has been successful, and the book contributes a well-researched study on the ethical views of one of the most interesting philosophers active in the first century BCE. However, the significance of the book goes beyond the narrow boundaries of the philosophy of the 1st century BCE. Anyone interested in the hermeneutical strategies adopted to build a philosophical tradition and to claim recovery of an ancient wisdom will find in the Antiochean project an interesting case study.

[1] De fin. III 10. For a helpful description of this private library in its historical and intellectual context, I refer the reader to F. Tutrone: "Libraries and Intellectual Debate in the Late Republic," in: J. König / K. Oikonomopoulou / G. Woolf (eds.): Ancient Libraries. Cambridge 2013, 152-166.