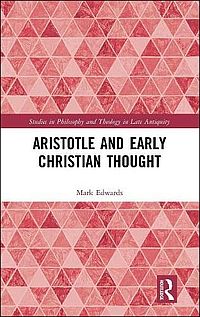 One stated goal of the volume is to correct the widespread impression that the only intellectual force that operated upon early Christian thought was Platonism (97). By engaging in a survey of the relevant authors the book shows that this thought is indebted to the Neoplatonic reception of Aristotle and offers an account of how, over time, Christian authors became the masters, and indeed the custodians, of the Greek philosophical tradition (97).

The volume can be usefully divided into two historical periods. The first period discusses Tertullian, Hyppolitus of Rome, Clement of Alexandria, and Origen. The second period, which follows the Council of Nicea (325 AD), is centrally concerned with the application of Aristotelian principles to the Trinitarian controversies. Key authors in this second period are Marius Victorinus, Cyril of Alexandria, and Gregory of Nyssa. After a chapter on the use of Aristotelian principles in the Christological debates, the volume ends with separate discussions of two of the most powerful and original thinkers of late antiquity whose significance goes well beyond the limit of Christian thought: John Philoponus and Boethius.

Knowledge of Aristotle can be described as second-hand and at most superficial in the period before the Council of Nicea. Christian authors active during this time had only indirect access to his thought, mostly via the doxographical tradition. As a result, they ended up with what is best described as a caricature of Aristotle's philosophy. For them, Aristotle was a materialist if not even an atheist, the thinker who limited (if not outrightly denied) divine providence. Origen of Alexandria, who was active a generation after Alexander of Aphrodisias, may be an exception to the rule. While his first-hand knowledge of Aristotle was surely limited, he may have been exposed to Peripatetic philosophy via the writings of Alexander of Aphrodisias. The conceptual parallels are quite striking. [2] What is more controversial, however, is how to interpret them. Mark Edwards stops short of speaking of a conceptual dependence of Origen on Alexander of Aphrodisias. His position can be summarized with the help of a quote: "Origen thus appears to be no more in debt to Alexander for his doctrine of God than for his doctrine of matter or his doctrine of providence. The Peripatetic heritage must be sought, if anywhere, in the vocabulary which enables him to give intellectual form to the ebullitions of inspired but unlettered prophets and apostles" (51).

The story of the reception of Aristotle among Christian authors changes in the fourth century AD thanks to the affirmation of the philosophical outlook that is now called (for lack of a better word) Neoplatonism. The integration of Aristotle's philosophy in this philosophical outlook is made possible by arguing that the Categories offers an ontology that is restricted to the sensible world. This reading of the Categories goes back to Porphyry, who is also the author of the Isagoge (Introduction). This little book was instrumental to the promotion of a selective reading of Aristotle that was immensely influential in late antiquity. This reading was presupposed by some of the Christian thinkers who engaged themselves in the Trinitarian controversies. In Aristotle, these thinkers found a conceptual apparatus that could be adopted, and indeed adapted, to discuss a set of problems alien to the Greek philosophical tradition. The results reached in this part of the book can be summarized with the help of another quote: "[...] when Christians of the fourth century undertook to defend the Nicene Creed by philosophical reasoning, the terms of greatest moment to them were ousia and dunamis ("being" and "power" or "potentiality"), both of which occur only sporadically in Plato. To Christians, they were scriptural, but the meanings grafted upon them by all parties to theological controversy in this epoch are derived, by way of Plotinus and Porphyry, from the Aristotelian lexicon" (78).

Other than Gregory of Nyssa, John Philoponus and Boethius are the only thinkers whose thought is discussed in separate chapters. A full review of the arguments against the eternity of the world offered in the treatise Against Proclus, as well as a critical discussion of the Aristotelian motives in his work On the Creation of the World (De opificio mundi), are offered in the chapter on Philoponus. While Philoponus' philosophical and apologetic works enjoyed great success, the same cannot be said for his theological writings, partly because they were perceived as deviant from Christian orthodoxy. The chapter ends with a discussion of the extant information on Philoponus' views on the nature of Christ and the Christian dogma of the Trinity.

Fittingly, the book ends with a chapter on Boethius whose activity both as translator and commentator of Aristotle is absolutely essential for the subsequent transmission of Aristotle's logic to the Latin Middle Ages. In addition to the Categories, De Interpretatione, Prior Analytics, Topics and Sophistical Refutations, Boethius translated Porphyry's Isagoge. He also offered two separate commentaries on the Categories, one on the De intepretatione, and two on the Isagoge. His treatment of the question of future contingents and divine foreknowledge, which is not original because it also shared by Ammonius of Alexandria, was immensely influential in the Latin West.

No Christian author between the second and the sixth century AD can be described as truly Aristotelian. They all adopted either a Platonic or a Neoplatonic philosophical outlook. When they adopted a Neoplatonic philosophical outlook, they were able to employ the conceptual resources developed by Aristotle to develop new and more convincing solutions to problems that are native to Christian thought.

[2] I refer to reader to Ilaria Ramelli: Alexander of Aphrodisias. A Source of Origen's Philosophy?, in: Philosophie antique [Online edition] 14 (2014). URL: http://journals.openedition.org/philosant/807