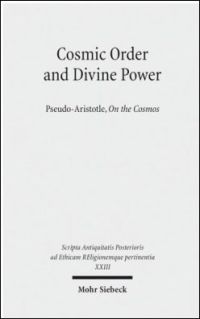 The first part of this volume contains the Greek text and English translation of the treatise On the Cosmos (also known by the Latin title De mundo), accompanied by general introduction and explanatory notes. The second part consists of eight interpretative essays on various aspects of the treatise and its subsequent reception in antiquity and beyond. The volume is published in the SAPERE series (Scripta Antiquitatis Posterioris ad Ethicam REligionemque pertinentia), whose stated goal is to make important source texts available both in the original language and in translation, and make them the object of an interdisciplinary analysis.

The De mundo is one of the most enigmatic works in the Aristotelian corpus. Transmitted under the name of Aristotle, this treatise is most likely a post-Hellenistic attempt to fill (what was perceived as) a lacuna in the Aristotelian system. The status quaestionis regarding the authorship and the date of the De mundo is reviewed in the general introduction. The main message that the reader takes away from this review is that the De mundo is not a genuine work by Aristotle and is a work that resists easy classification. It is not quite like the school treatises of Aristotle, but it is not really a summary of Aristotelian philosophy. Rather, it is a work of popular philosophy, whose intended audience is likely to be readers with a general, rhetorical education.

The reading of the De mundo as a popular work of philosophy is further explored in the first two essays: while one is a discussion of the didactic purposes and discursive strategies adopted in the De mundo (Clive Chandler), the other is an introduction to its geographical section (Renate Burri). A third essay deals with the De mundo as an attempt to offer an account of the cosmos that includes a discussion of god's involvement as a causal principle in the explanation of the existence and preservation of the cosmos (Johan C. Thom). Taken together, the remaining five essays offer a more or less complete survey of the reception of our work. This survey is arguably the most interesting part of the volume. It consists in an attempt to review the fortunes of the De mundo in the Greek, Syriac, Arabic, and Latin traditions. [1] Two essays are concerned with the Greek tradition: while the first deals with the pagan tradition (Andrew Smith), the second concentrates on Jewish and Christian texts (Anna Tzvetkova-Glaser). Two more articles offer an overview of the reception of our work in the Syriac and Arabic worlds. The first focuses on the Syriac and Arabic versions of our work (Hidemi Takahashi), whereas the second discusses the relative lack of impact of our text in the Arabic tradition (Hans Daiber). The final chapter is an overview of the reception of the De mundo in the Latin world from its translation in the thirteenth century to the Renaissance, including also a chronology of the debate on the authenticity of this work all the way to the twentieth century (Jill Kraye).

The Greek text and the English translation are printed facing each other after the general introduction and before the interpretative essays. The Greek text is the one established by Lorimer minus the apparatus criticus. [2] The translation, which is always reliable and generally very readable, is by Johan C. Thom, who is also the author of the explanatory notes. They are mainly short notes, meant to assist the reader in working through the translation.

We come away from reading this book with an enhanced appreciation of the complexity and richness of the reception of the De mundo. At the same time, we feel that a more sustained and detailed discussion of certain key issues surrounding the composition of this work and the philosophical allegiance of its author would have been desirable. In the general introduction to the volume, for example, we are told that the De mundo does not only betray Stoic influences but also presents a rapprochement of Aristotelian and Platonic philosophy. This phenomenon is certainly not unique in the post-Hellenistic era, but this only makes more pressing to discuss it in some detail. For instance, we would like to know why the De mundo is a contribution to the Aristotelian tradition rather than an eclectic work. A full treatment of this question would have required a more sustained and detailed discussion of the philosophical commitments of the author of the De mundo, with attention to how he enriches the Aristotelian tradition by appropriating ideas and doctrines that are extraneous to it. What is especially important is not so much whether we are able to trace back certain ideas or doctrines to a particular author or to a specific school, but rather how these ideas or doctrines are integrated into a compelling account of the cosmos and of god as its causal principle given from a Peripatetic point of view. Admittedly, the third interpretative essay goes some way toward addressing these issues in connection with the question that is at the very heart of the De mundo: "how it is possible for god to be responsible for the order and preservation of the world without giving up his self-sufficiency and independence" (107). Still, a more vigorous engagement with the text of the De mundo would have helped us see in greater detail how the author of this very interesting work achieves his main objectives. These objectives can be recalled with the help of a quote taken from the first interpretative essay: " to summarise a large quantity of data [...] to provide an outline and brief explanation of the fundamental structures of the physical processes of the universe [...] to demonstrate that god ultimately plays an essential role [ ...] in the maintenance and regular functioning of the universe" (87).

The De mundo is an important text, and a text whose interest goes emphatically beyond the boundaries of the Aristotelian tradition. Scholars working on the main developments of philosophy after the Hellenistic era will find in the De mundo a work of considerable interest. We congratulate the general editors of the SAPERE series for having promoted the project of a new translation accompanied by interpretative essays of this work, and the editor of the volume for having realized it.

[1] There is also an Armenian translation of the De mundo, which is mentioned but not studied in the volume under review.