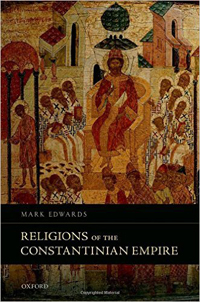 Mark Edwards, a Professor of theology and religion at Oxford University, has provided a number of important articles, textual translations, and books dealing with late antiquity over the past quarter century. In this magnum opus on Religions of the Constantinian Empire, he brings together his wide knowledge of the ancient literary sources to offer "a conspectus of change and persistence" (xi) in religious beliefs and practices under the shadow of Constantine's conversion to Christianity. In his introduction, he laments the overspecialization in modern academia which prevents practitioners of political history, philosophical studies, and theological debates from benefiting from the findings of their separate disciplines. As an historian of religion, he proposes to offer "a more holistic approach" (viii) in this tome by surveying and assimilating the philosophical discourses, religious rites, and theological debates of the historical period from A.D. 300 to 340 in order to better comprehend the spectrum of religious phenomena in the Constantinian Era. He partially succeeds through the breadth of subjects he includes, but partially stumbles with the manner of presentation he employs.

The first part of the book is entitled "Philosophical Variations," and includes five chapters dealing with Christian and pagan philosophical speculations and life patterns. Edwards concurs with recent scholarship which posits that the great Christian apologetics of the early 4th century were evoked by pagan literary attacks and government persecution against the faith (Neoplatonic philosophers like Porphyry of Tyre and Tetrarchic emperors under Diocletian). He begins with chapters on Eusebius of Caesarea's Greek defense of Christianity in the Preparation for the Gospel, and on Lactantius of Nicomedia's and Arnobius of Sicca's Latin defenses in the Divine Institutes and Against the Nations. He demonstrates how these Christian authors employed similarities between Platonism and Christianity (second and third divine principles) and weaknesses in pagan beliefs (Euhemerism) as well as detailed accounts of Jewish prophecies and apostolic witnesses to assert the falsity of pagan philosophy and the verity of Christian doctrine. He follows with two chapters on changes and varieties in Platonic thought and practices in the period, moving from the teachings of Plotinus through Porphyry to Iamblichus and Chalcidius; and accounts of the philosophic life as seen in Iamblichus' On the Pythagorian Life, Firmicus Maternus' Mathesis, and Philostratus' Life of Apollonius which reveal pagan positions in opposition to Christian beliefs. He ends this section with a chapter on the rise of Christian monasticism (eremitic and cenobitic), and how Antony, Pachomius and their followers seem to have had little in common with the pagan holy man of late antiquity. Throughout this part, he compares and contrasts Christian and pagan teachings.

The second part of this tome is labeled "Religious Plurality," and has three chapters on the religious traditions of the era which were in competition with the Christianity being patronized by Constantine. Edwards starts with a survey of those cults which he believes were waning in this period and were satirized in Firmicus Maternus' On the Error of Profane Religions. Among the "Religions of the Vanquished," he enumerates the Persian Mithras and its taurobolium, the Egyptian Isis and Osiris, the Phrygian Cybele and its ecstatic vices, various eastern Venuses, the Greek Dionysian mysteries, and the Levantine Baal and African Saturn cults. Because of the strange and sometimes repellent rites in these cults (even to some pagans as well as to Christians), he does not see them as presenting a serious threat to the Christian "philosophia" (135). Among the "Religions of Transformation," he describes Manichaeism, Hermetism, Gnosticism, and alchemy, and shows how they had some beliefs and practices in common with Christianity (mysteries and immortality), and posed a greater threat to it at the beginning of the 4th century. He closes out this section with a look at Judaism under Constantine. He reviews the emperor's negative attitudes toward and harsh legislation against the Jews, but showed "that they enjoyed more toleration under Constantine than had been extended to Christians in the last years of Diocletian" (318). He provides detailed analyses of the texts and issues throughout this part.

The third part of the book is entitled "Christian Polyphony," and entails six chapters focused upon Constantine's conversion to Christianity and the changes his patronage of Catholicism brought to the Church in particular and to religion in general within the Roman world. In an initial chapter on "The Religious Integrity of Constantine," Edwards largely accepts the Christian accounts of Lactantius and Eusebius that the emperor had some kind of visionary experience which led to his conversion in 312, and discounts the recent efforts of Weiss and Barnes to conflate the pagan Apollonian epiphany of 310 with the Christian revelations of 312. He goes on to cite Constantine's own words in his letters, laws, and sermons to prove that he early gained a good knowledge of Christianity and was sincere in his "personal adherence to the Savior" (183-96). He offers a detailed overview of Constantine's Oration to the Assembly of Saints, but posits an earlier date and different site for its delivery than usually accepted. He follows with two chapters dealing with the end of pagan sacrifice and the imperial propagation of the Bible in the empire. While not taking a definite stand on the former issue, he largely agrees with Barnes and this reviewer that references in Eusebius' Life of Constantine II.45, in Optatus' Against the Donatists II.15, and in the later prohibition of sacrifice by his sons in a law of the Theodosian Code XVI. 10.2 make it reasonable to assume that Constantine tried to end animal sacrifice even if he did not completely close pagan temples. He recounts how all Christian apologists and some Platonic philosophers did not approve of animal sacrifices, and how the Christian Eucharist (sharing in the body and blood of Christ symbolically through the bread and wine of the Sunday services) ultimately replaced pagan sacrifices in the 4th century. On the latter issue, he posits that Eusebius of Caesarea's commission from the emperor to produce fifty liturgical Bibles for the new Christian capital of Constantinople "may have contributed to the emergence of a standard text" (319); in this chapter he also surveys the views of Eusebius on the canon of the Old and New Testaments, and posits that the 4th century Codex Sinaiticus was not one of the Bibles produced by Eusebius at Caesarea. He then offers a chapter analyzing Eusebius' Demonstration of the Gospel and Juvencus' Books of the Gospels - the former a detailed Greek prose defense of the truth of the Gospel and the latter a massive Latin poetic epic of the Gospel story. Next Edwards provides a detailed chapter on the Arian Controversy and the Council of Nicaea, arguing for the orthodoxy of Origen and Eusebius of Caesarea against the diatribes of Marcellus of Ancyra, and showing how philosophical speculations intertwined with theological debates in this conflict. In the final chapter of this section, he recounts Eusebius' positive attitude to the emperor in his Tricennalia Oration, Church History, and Life of Constantine, and Constantine's difficult struggles to achieve peace in the imperial Church through his interventions in the Arian Controversy in the east and in the Donatist Schism in the west. He agrees with recent scholarship that the epigrams of Palladas of Alexandria in the wake of Constantine's triumph over Licinius in 324 probably do show pagan fears about the fate of their religious rites, and that the literary attack on paganism by Firmicus Maternus two decades later reveals the turning of the tide in favor of Christianity in the religious culture of the empire.

This considerable tome closes with a helpful "Epilogue" summarizing the themes and conclusions of each part of the work, a useful "Bibliography" of primary and secondary literature, and a full "Index." The great strength of the book is the broad and deep coverage Edwards provides of the relevant literature - he summarizes, cites and analyzes all of the key texts he is using, and he gives full coverage not only to the well-known works of Porphyry, Lactantius and Eusebius, but also to the lesser-known works of Methodius, Juvencus, and Maturnus. Other strengths of the book are the review of source problems and the elucidation of different interpretations among scholars on the subjects covered (Burckhardt, Barnes, Elliott, Odahl, et. al.). Unfortunately, there are some weaknesses with the presentation which the author employs. He avoids correct chronological sequence throughout the book, placing authors, works and events out of order: putting Eusebius before Lactantius, Lactantius before Arnobius, and these Christian authors before the pagan philosophers like Porphyry and Hierocles whom they were answering; dealing with Constantine's laws haphazardly; and putting the Arian Controversy before the Donatist Schism. All this leads to confusion, repetition and lack of a proper regard for cause and effect. He makes some historical errors that are unfortunate: claiming that Constantine offered the See of Antioch to Eusebius (4) - the emperor accepted local and conciliar episcopal elections, and we have his letter praising Eusebius for not accepting the election to Antioch; asserting that Lactantius saluted Constantine as a Christian in the first book of his Divine Institutes (20) - Constantine was only a tolerant pagan when the first book was written and was only saluted as a full believer in the seventh book; and stating that Constantine contracted more than one marriage even after his conversion (194) - Constantine was married twice, first as a young soldier to Minervina in the east (290s), and second as a new emperor to Fausta in the west (307), both before his conversion; he was touted as being faithful to both, and after the death of Fausta (326), he appears to have remained celibate and unmarried. There are a number of misspellings and misprints, and a tendency to use ponderous words and convoluted syntax in the text. And, finally, I noticed some key titles surprisingly missing in the notes and bibliography: the classic text in the field by Liebeschuetz, Continuity and Change in Roman Religion (1979) and the new work by Jones, Between Pagan and Christian (2014) would have been useful throughout; Digeser's A Threat to Public Piety: Christians, Platonists, and the Great Persecution (2012) would have been helpful in the first part; Dungan's Constantine's Bible: Politics and the Making of the New Testament (2007) should have been cited in the third part; and although he cites this reviewer in several places, the author could have made better use of the factual data and chronological precision in my Constantine and the Christian Empire (most recent edition 2013) to prevent a number of mistakes. Yet, even with these reservations, I consider this book to be a major achievement in Constantinian studies, and graduate students and scholars in the late antiquity field will find pearls of knowledge in its pages.