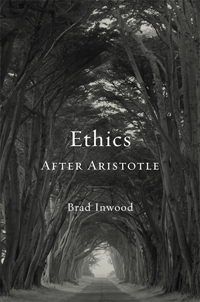 This book is about the reception of Aristotle's ethics in the Hellenistic and post-Hellenistic periods. It is based on the Carl Newell Jackson Lectures that the author delivered at Harvard University in April 2011. In five chapters, Inwood sketches a brief but compelling story of how Aristotle's ethics was received and transformed within the Peripatetic tradition from Theophrastus of Eresus to Alexander of Aphrodisias. In addition to these two figures, the main characters of the story are: for the Hellenistic Peripatos, Lyco of Troas, Hieronymus of Rhodes, and Critolaus of Phaselis; for the post-Hellenistic Peripatos, the summary of Peripatetic ethics by Didymus (the so-called Doxography C). The following texts also features in our story: the Great Ethics [Magna Moralia], which Inwood considers a spurious work written by a contemporary of Theophrastus; and the fifth book of Cicero's On Goals [De finibus bonorum et malorum].

To adopt an expression first used a few years ago by Hans Gottschalk, we can say that the story told in this volume is one of change in a context of continuity. [1] The continuity is given by the fact that all the characters in our story work within the theoretical framework delineated by Aristotle in the Nicomachean Ethics and the Eudemian Ethics. The change is the result of the interaction of two main factors. On the one hand, there are the perceived ambiguities and tensions in Aristotle's ethical works. On the other hand, there are the complex and at times intense philosophical debates that involve the main characters of our story. While these debates do not fully determine how Aristotle's text is read, they contribute to the different directions in which Aristotle's thought is developed.

I would like to illustrate what I mean by change in a context of continuity with the help of a couple of examples. The first comes from the early Peripatos. According to Inwood, both Lyco of Troas and Hieronymus of Rhodes offered interpretations of Aristotle's ethics that flirted with hedonism. While Lyco defined the chief goal of life as "true joy [chara] of the soul", Hieronymus held that the chief goal consisted in a life free of disturbance [to aochlêtôs zên]. As we try to trace these characterizations of the chief goal [telos] back to Aristotle, we have to keep in mind that two treatments of pleasure have been transmitted to us: the first is found in Eudemian Ethics 6 (= Nicomachean Ethics; 7), the second in Nicomachean Ethics 10. While in the first pleasure is identified with unimpeded activity, in the second it is presented as completion of the activity. We do not need to discuss whether these two treatments are compatible. What matters is that on a certain reading of the first treatment of pleasure, Aristotle may be regarded as some sort of hedonist. Inwood suggests that this is what happened in the early Peripatos largely as a result of a dialectical confrontation with the Epicurean school.

The second example comes from the late Hellenistic Peripatos. According to Inwood, Critolaus of Phaselis is a turning point in the reception of Aristotle's ethics. Critolaus is best known for the view that there are three kinds of goods - goods of the soul, goods of the body, and external goods - and the chief goal is a life completely filled with all the three kind of goods. Inwood argues that this view entails a reorientation of the Peripatetic ethical theory not only away from hedonism but also away from the idea that the chief goal of life is activity. Instead, the emphasis is on having the three kinds of goods. We do not need to examine the extant evidence. What matters is that this development is the result of a dialectical confrontation with the Stoics and their claim that the good is identical with virtue. It is also an attempt to respond to what may be perceived as Aristotle's hesitations on the role and contribution of the external and bodily goods to a happy life.

The immediate successors of Aristotle engaged in largely independent debates with the Epicureans and the Stoics. As a result, they developed different interpretations of Aristotle. What unifies their often competing interpretations is the fact that they are interpretations of the same ethical theory. As noted above, this is the theory presented in the two ethical collections transmitted to us: the Eudemian Ethics and the Nicomachean Ethics. [2] In connection with this last point, it is worth noting Inwood's choice of speaking of "Aristotelians" or even "neo-Aristotelians" rather than of "Peripatetics". By his lights, the Peripatetic philosophers are engaged with the text of Aristotle's works and intend to promote a true interpretation of his thought. For example, Inwood argues that one of the most successful development within the Peripatetic tradition - the one promoted by Critolaus - is not due to a lack of knowledge of Aristotle's ethical works but to a deliberate and conscious effort to update Aristotle's ethical thought in light of new theoretical pressures. From this point of view, the gap that is often perceived between the Hellenistic and the post-Hellenistic traditions is significantly reduced.

This is not to deny that the first century marks a new era in philosophy. Inwood places the beginning of this new era in the second half of the first century BC (the 40s or even the 30s BC). It is around this time that, according to Inwood, begins a return to Aristotle that will culminate in the synthesis promoted by Alexander of Aphrodisias (in the late second and early third century CE). Inwood does not engage in a synoptic study of all the Peripatetic philosophers who have engaged with ethical questions during this period. For example, Aspasius, the author of the first extant commentary on Aristotle (specifically on Nicomachean Ethics 1-4, 7, and 8), remains outside the scope of the book. Inwood concentrates on what he considers to be the most creative attempts to engage with Aristotle's naturalism. The latter remains an important theoretical commitment in Peripatetic ethics; however, this commitment is reinterpreted by offering an account of how we become ethical agents.

Inwood focuses on the summary of Peripatetic ethics preserved by Stobaeus (the so-called Doxography C). The author of this summary is traditionally identified with Arius Didymus. This identification is not terribly important for our story. What matters is that his commitment to naturalism takes the form of an account that appeals to our basic commitment to our own existence. As Inwood puts it, the radical desire to be what we are is invoked to explain how we, born as non- (or rather pre-)rational animals, become rational agents over the course of a natural development. This account is saturated with Stoic language. However, Inwood is right when he says that the author does not mean to build an eclectic position that combines Stoic and Aristotelian ethics. Rather, he tries to advance a true interpretation of Aristotle's ethics. He does so by employing some of the most successful ideas of the time; it just so happens that those ideas come from Stoic philosophy. This is a phenomenon that is observed not only in ethics but also in physics and ontology. [3]

Ethical naturalism remains an important commitment throughout the entire Peripatetic tradition. The final chapter of the book concentrates on a short but important essay wherein Alexander of Aphrodisias deals with the views of his Peripatetic predecessors on the primary object of attachment (prôton oikeion). This is not a concept that we find in Aristotle's works. Still, it is adopted by the Peripatetic philosophers of the post-Hellenistic period in order to present what they consider Aristotle's position on the topic. In fact, the title of the essay contains an explicit reference to Aristotle, which is lost in the translation adopted by Inwood. [4] This reference is important: while it is true that the essay is concerned with the views of the Aristotelians on the topic of the primary object of attachment, it is pretty clear that they claim to have found those views in Aristotle. This fits nicely with a point that is made over and over again in the book. However original and creative their ethical views are, the Peripatetic philosophers claim that those views are not only derived from Aristotle but also found in his writings. This is also why they are Aristotelian rather than Peripatetic philosophers. In other words, they regard Aristotle's text as the official starting point of any serious philosophical reflection. This is especially true for Alexander of Aphrodisias. He is not content to report and criticize their views; he also improves on them and shows how by employing familiar distinctions that we find in Aristotle we can show how we naturally reach "the end and goal of human life in a way that affirms it rational character, the special place for virtue in it, and the distinctive active-ness of the best human life" (123).

It is not Inwood's ambition to offer a detailed, let alone complete, presentation of the reception of Aristotle's ethics within the Peripatetic tradition. His stated purpose is rather "to conduct a preliminary exploration of the aftermath of Aristotelian ethics" (2). However, it is obvious that Inwood has delivered more than that. His book is an elegantly written, historically informed, and philosophically minded introduction to the complexities of Aristotelian ethics in the Hellenistic and post-Hellenistic worlds. While it does not exhaust the topic of Peripatetic ethical thought, it is an insightful and reliable guide for both the expert and the non-expert reader. As such it is to be considered a success.

[1] Hans B. Gottschalk: Continuity and Change in Aristotelianism, in: Aristotle and After (= Bulletin of the Institute of Classical Studies. Supplementary volume; 68), ed. by Richard Sorabji, London 1997, 109-115.

[2] In this story the Great Ethics [Magna Moralia] and the short essay On Virtues and Vices [De virtutibus et vitiis] are not authentic works by Aristotle. While the first is by an author contemporary of Theophrastus, the second is to be dated to the first century BC.

[3] I refer the reader to my survey of Aristotelianism in the first century BC, in Andrea Falcon (ed.): Brill's Companion to the Reception of Aristotle in Antiquity, Leiden / Boston 2016, 101-119.