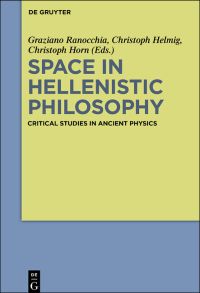 The word "space" comes from the Latin spatium; as a philosophical term, it is a creation of Lucretius (in the first half of the first century BC). Before Lucretius, spatium had a mainly temporal meaning. Lucretius adopted this term and placed it in a web of interrelated concepts in order to popularize Epicurean physics into Latin. The fact that this term has lost its original attachment to Epicurean physics and has become an indispensable scientific concept whose meaning seems so obvious to us is a testimony to how successful the Lucretian innovation was. We learn all this (and much more) from Carlos Lévy whose article, at least in my view, would have worked better at the outset of this collection of essays. After all, this article is an explicit attempt to discuss the origin of a term, and indeed a concept, that is not obviously present as such in the ancient Greek tradition. What this tradition has to say on the topic of space can be reconstructed by looking at the Greek discussion of three interrelated technical words: "place" (topos), "void" (kenon), and "room" (chôra). Chôra is often rendered (in this volume as elsewhere) as "space." Introduced into the philosophical lexicon by Plato in the Timaeus, chôra is often adopted together with topos: while topos is used to refer to a precise location, chôra is employed for place or room understood in the sense of a wider extension. [1]

The book opens with an essay by Kempe Algra on Aristotle and the reception of his theory of place (topos) in the Peripatetic tradition (Theophrastus of Eresus, Eudemus of Rhodes, Strato of Lampsacus, and Xenarchus of Selucia). What emerges from the review of the early reception of Aristotle's treatment of place is that the Hellenistic Peripatos concentrated on what were at the time perceived as outstanding problems or difficulties in Aristotle's theory. It is only with Xenarchus of Seleucia (second half of the first century BC) that exponents of the Peripatetic tradition begin to engage with the alternative (Stoic) conception of place. The evidence for Xenarchus is very meagre and open to more than one reading. Algra refrains from ascribing Xenarchus a commitment to a Stoic conception of place. The little of his work that survives is best understood as an attempt to update Peripatetic physics in the context of a debate between philosophical schools.

Two articles deal with Stoic philosophy. The first, by Michele Alessandrelli, offers a detailed study of the definitions of place (topos), void (kenon), and room (chora) as preserved by Arius Didymus (fr. 25 Diels = SVF 2.503). These definitions convey the orthodox Stoic position on the physics of space and can be traced back to Chrysippus of Soli (third century BC). Of course, they do not represent the last word of the Stoics on the topic. Quite the opposite. In the second article, Teun Tieleman discusses the most important innovation introduced by Posidonius of Apamea, the leading Stoic philosopher of the first century BC. The Stoic orthodoxy was that the finite world is surrounded by an infinite void. Posidonius appears to have argued that the extra-cosmic void is finite: it extends only as far as it is necessary for the conflagration.

Three essays investigate the Epicurean contribution to the ancient debate on space. In the first, David Konstan revisits the extant evidence for Epicurus' conception of void. Against the now prevalent view that the Epicurean void is to be equated to empty space, Konstan argues that void is the absence of bodies and as such is merely a complement to them rather than a sort of matrix that extends uniformly and infinitely in all directions as a limitless substrate. Holger Essler focuses on Philodemus of Gadara (first century BC) and his discussion of the dwelling places of the Epicurean gods. In this case, physics is applied to theology to defend one of the most distinctive Epicurean doctrines, namely that the gods live in the intermundia (metakosmia). By engaging in an in-depth study of a papyrus fragment from the third book of the treatise On Gods [De dis], Essler shows that Philodemus consciously adopted concepts and explanations originally used by Aristotle and the Peripatetic tradition. Of course, these concepts and explanations are adapted to a different context and acquire a new meaning, but they still betray knowledge of Aristotle's school writings such as the Meteorology. I have already discussed the article on Lucretius by Carlos Lévy because of its more general significance for the subsequent history of the term "space." This article also studies some of the main developments within the Epicurean tradition and is treated as such by the editors of the volume. I note, in passing, that this is the only article that is concerned with the Latin rather than Greek tradition.

Two articles deal with the skeptical tradition. The first is by Richard Bett, who attempts to recover what Aenesidemus of Cnossos (first century BC) may have written on the topic of place. Aenesidemus is a shadowy figure and there are serious limits to what can be said on his work and ideas. Bett does his best to recover Aenesidemus' critical use of the conception of place. His use is critical in the sense that Aenesidemus does not defend or endorse any particular conception of place but rather employs ideas or views on the topic of place to promote his skeptical agenda. Emidio Spinelli deals with Sextus Empiricus (second century AD) and his treatment of place (topos) in the Outlines of Pyrrhonism (PH 3.119-135). According to Sextus, we can speak of place either strictly or loosely. It is only in the first case, when we speak strictly about place, that we develop what we might calls technical conceptions of place. It is against those conceptions that Sexus deploys his skeptical strategy. As in Aenesidemus, we find no constructive use of the concept of place in Sextus but only an attempt to show that all the conceptions developed as we try to speak strictly about place are equally unsustainable and indefensible.

Fittingly, the volume ends with a study by Jaap Mansfeld of the doxographical evidence for the views of Hellenistic philosophers on place (topos), void (kenon), and room (chora), with a reconstruction of the text of Aëtius 1,18 (On Void), 1.19 (On Place) and 1.20 (On Room), and 2.9 (On What is Outside the Cosmos, Whether a Void Exists).

Even this brief review should be enough to demonstrate that the ground covered in this volume goes emphatically beyond the narrow boundaries of Hellenistic philosophy. We are offered chapters on Posidonius, Philodemus, Aenesidemus, and Lucretius (first century BC); Aëtius (first century AD); Sextus Empiricus (II century AD). We too often tend to think of authors such as Lucretius, Aëtius, and Sextus Empiricus as mere sources of information about Hellenistic views that can themselves be recovered only indirectly. Here these authors are studied in their own right. This is a welcome development. The article on Philodemus is certainly among the most innovative in the volume. Philodemus is an author whose ideas are rarely discussed in connection with ancient physics. What is especially interesting in this case is the attempt to recover Philodemus' engagement with Aristotle. It remains to be seen whether Philodemus is an exception in the Epicurean tradition or whether our general lack of information about the Epicurean knowledge of Aristotle is a mere reflection of the extant evidence, which is too scanty to allow us to fully evaluate the debts of Epicurean authors to Aristotle.

In sum, this is a rich and interesting collection of essays. The volume as a whole goes beyond what has been achieved so far on the ancient conception of space and offers new information and ideas on a topic whose significance for the history of ancient physics can hardly be overstated.