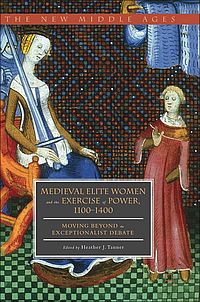 No one has seriously thought for a long time, if ever, that medieval women could not hold land and exercise power. But - particularly in those countries whose Anglophone historiography is haunted by the formidable ghost of F.W. Maitland - there remains the notion that this happened only in exceptional cases: daughters with no brothers, wives who are regents in their husbands' absence, widows holding the guardianship of or regency for their minor sons, or acting in respect of dower lands they held for their lifetime only. Rules about landholding, which often determined power, varied across Europe, but there is no jurisdiction I am aware in which married women had the same rights to control land as their husbands, or daughters as their brothers, if they had them. The question arises, then, as to how many cases of powerful women one needs before they stop being exceptional. Heather J. Tanner, Laura L. Gathagan and Lois L. Huneycutt take it as a premise that "elite women in positions of authority in the central medieval period were expected, accepted, and routine" (2), and the book makes a persuasive case that this was so. No one should imagine that they were not disadvantaged relative to men, or in any way on a footing of equality, but neither were powerful women surprising.

Unusually for an edited volume, the chapters are practically uniformly strong, and the volume has a coherence that many do not. The chapters range over Christian society in all of Western Europe and the Middle East, and deal with landholding, cultural patronage, and government. Rather than list them all, I will highlight some of the themes that emerge. One is the participation of married women as partners with their husbands. Tanner and others argue that we must take seriously the requirement in many places that married women consent to land transactions by their husbands. In addition, many aspects of medieval rulership, including court ritual, gift-giving, literary patronage which could in itself be political, and judicial decisionmaking, allowed or even required female participation. Intercession by a wife with her husband was not a nod to a stereotype of feminine soft-heartedness, it was a ritual performance that allowed a man to show mercy without being deemed too soft himself.

A second theme that emerges is the way that, in addition to partnership with their husbands, married women exerted more independence than legal treatises would lead us to expect; even in England, couverture could be sporadically enforced. Tiffany Ziegler argues that women's patronage of religious houses needs to be seen as an exercise of power, and at least in the Low Countries they could freely dispose in their testaments of the wealth they brought to the marriage.

Third, widows, the most independent of women if their economic situation did not force them to remarry, and the ones about whose exercise of power we often have the most evidence, may have been even more independent than many of us thought. RaGena DeAragon suggests (22-23) that widows being "in the king's gift" may not actually have meant he had control over their remarriage.

Fourth, family could trump gender, in terms of inheritance or exercise of power, although male and female members of the family might exercise power differently (a distinction needs to be drawn between women who transmitted lands or titles from their fathers to their sons and women who held the titles themselves). Examples include Miriam Shadis's discussion of Portugal, where daughters inherited a full share and royal daughters could hold the title of queen, and Erin Jordan's treatment of the principalities of the Latin East.

This book is a successful attempt to help redress the historical balance away from a focus on misogyny. Some of the claims are based on stronger evidence than others, but medieval historians often have to fill gaps with conjecture, and claims that minimize women's role are not based on anything stronger. When Linda Mitchell argues that Isabella de Clare's "political activities were shrouded by the robust nature of [her husband] Earl William [Marshal]'s career" and hampered by her frequent pregnancies (51) she is working from the assumption that those political activities were more substantial than the documentation for them; Isabella's acta date from her widowhood. And yet such an assumption is more logical than the assumption that when a woman forms a link between important families, she is a silent and inactive one, while her husband and brothers remain bound simply by the fact of the marriage. Teresa Earenfight's concluding chapter on Catherine of Aragon returns to some of the theoretical issues raised by Tanner in the introduction and argues that what women did was not just "agency" but the exercise of power, sometimes in the same ways as men used it and sometimes in different ways, albeit often downplayed in the sources.

Patrilineage and primogeniture, we now know, were not as straightforward as they were once thought to be (although, even in the case of Emma of Ivry, a powerful landholding Norman woman discussed by Charlotte Cartwright, she was not in the line of descent succession to the duchy because she was related matrilineally rather than patrilineally to the duke). And yet, for all the important points raised and evidence presented in this work, there is a danger in focusing too much on the positive. Judith Bennett has likened patriarchy in history to a dance in which the steps and partners change, but men always lead, and asked "What has kept women from ever taking the lead or even sharing it?" [1] This book argues that medieval did indeed take or share the lead, enough so that they cannot be thought mere exceptions. But they did so within a structure that continued to disadvantage them, making them all the more remarkable, if not exceptional. Women did play a role, but not, on the whole, as prominent a role as men's. They did control land and wealth, but not as much as men did; they held leadership positions, but not as many as men did; they were patrons of culture, but even here, not as much as men. In fact, they were perhaps not so different from their modern counterparts.