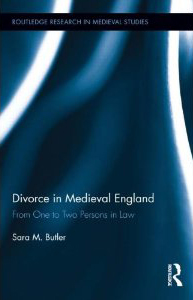 Sara Butler's work relies on legal sources but is aimed at answering primarily social historical questions. In discussing divorce in medieval England, she takes a capacious view. It includes cases of annulment, of legal separation, and of self-divorce, that is, abandoning a first spouse without legal process. She draws on a very wide range of record types, both canon law and common law. She takes the reader into a number of fascinating cases and poses questions few other scholars have addressed.

The medieval legal category of divortium was not the same as the modern category of divorce. Modern divorce recognizes that a marriage existed but declares it to be at an end, leaving both parties free to marry someone else. Medieval divorce, where it was done through a formal legal mechanism, was often equivalent to modern annulment, declaring that the marriage was null in the first place, in which case both parties could marry again. Alternatively, a church court might declare that the parties should now live separately because of offenses like cruelty or adultery, in which case they could not remarry. There was no opportunity to replace one valid marriage with another, unless the first spouse died.

Butler acknowledges these legal distinctions, but does not focus on them, and she tends to elide some technicalities of medieval law. Precontract, while it could be considered a kind of bigamy, is not the exact equivalent, yet she repeatedly equates one with the other (2, 20-23, 199). She uses "divorce" to cover all cases in which marriages ended, rather than its medieval or its modern legal meaning. Sticking with a social rather than a legal category has its problems, in that it is hard to know whether medieval people would have grouped all these forms of marital breakup together. But it is also quite refreshing, in that medieval legal categories may not have corresponded to medieval behavior any better than modern social categories like "broken marriage" do: "individuals anxious to escape a marriage had to mold their grievances to fit the needs of the lawsuit [...] many lawsuits may reflect collusion between spouses who mutually agreed that a divorce was in their best interests" (39). Butler suggests (35) that self-divorce, in which people did not have to fit their situation into preexisting legal categories, has the potential to explain people's actual motives, except that the evidence for it is so scanty.

Butler is particularly, and quite rightly, concerned with the effect of marital breakdown on women, who relied on men for economic support. This was aggravated, she shows, by the doctrine of coverture, which gave control of all the woman's resources to the husband. Although coverture was a "legal fiction" that did not have the force it would have by the eighteenth century (10), she argues, the existence of this idea in the courts and the wider culture made it difficult for women to reclaim their property even when they were legally entitled to it. More cases were brought by women, but since men were more capable of living independently they may not have needed recourse to the courts (38).

In her first chapter, "Why Did They Leave?" Butler looks at the way impediments to marriage functioned in the divorce process. People discovered that they were related within forbidden degrees, or had previously had intercourse with a spouse's relative, or were related to a spouse's godparent. Alternatively, someone else discovered the relationship and the church demanded that the couple separate. The church could also demand this in the case of precontract, that is, where one partner had previously agreed to marry a third person. The first promise was binding under canon law, but prosecutions for bigamy did not tend to be of people who had precontracted but rather people who had solemnized the first marriage and lived with that spouse. As Butler argues, many people were pushed into first marriages by their families or others, with coerced consent. Some marriages ended not because of these impediments but because of domestic violence or adultery. It would have been helpful for Butler to mention more prominently that even where the term "divorce" was used in these situations, the innocent party was not able legally to remarry in these cases.

The second chapter, "The Logistics of Divorce," looks at the process people went through. It was quite expensive, which suggests that self-divorce may have been rather common. Families were often involved in helping women leave their husbands but risked being accused of abduction for doing so, even when it was the woman and not the family who took the initiative. Butler argues that the labeling of such cases as "abduction" rather than "desertion" makes the point that the women were not held legally responsible for their actions (49).

"The Risk Factor," the third chapter, continues the emphasis on women's experience as it explores what they had to lose: not only financial support and social standing, but also the spiritual value of the sacrament. And spurned husbands were sometimes not reluctant to use violence against absconding wives. As Butler points out, in many instances it is not possible to know exactly what role the woman's volition played, especially with heiresses where the stakes were high. Women might adopt the trope of weakness and claim that their natal families or their husbands had forced them to do something that they might, in fact, have chosen for themselves.

The book continues to analyze the consequences of marital breakup in Chapters 4, "Whose Property Is Whose?" and 5, "What Happened to the Children?" Here the important story is about the relation of church and secular law, which both had something to say about these questions. Women's right to property, unlike men's, could depend on their perceived moral behavior. Butler finds that the courts paid remarkably little attention to children in divorce cases, in striking contrast to today when custody and child support loom as important questions. It is perhaps a little strong to say that "the medieval world viewed children as property," but certainly true that "children inevitably belonged to the father" (112). However, young children often remained with their mothers for a time. If a divorce made children illegitimate there were still provisions for their support. Chapter 6, "What Happened Next?" looks at the problems of proving that a divorce had taken place in the fact of courts that might simply choose to ignore it.

Butler sees the church as thwarting lay people who wished to end their marriages, "standing in the way of many individual dreams of autonomy" (147). One might argue that the state today does the same. Debates rages today about whether high divorce rates reflect people leaving unbearable situations, or people shirking commitment and seeing families as disposable. For the Middle Ages, given the difficulty of obtaining a divorce, Butler plumps for the former: divorcing women "refused to be victims" and "actively defied social norms to choose their own fates." Perhaps not all of the many women whose cases Butler discusses were feminist heroines defying a system that was stacked against them. Nevertheless, she makes a good case for reading beyond the records and imaginatively reconstructing motives.