Mark Bailey / Stephen Rigby (eds.): Town and Countryside in the Age of the Black Death. Essays in Honour of John Hatcher, Turnhout: Brepols 2012

Mark Bailey: The Decline of Serfdom in Late Medieval England 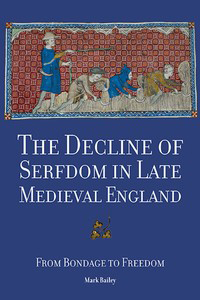 It is high time for new work on English serfdom, about which a great deal of excellent work has been done but not recently in much quantity. Mark Bailey's work, focusing on the end of serfdom rather than its heyday, is original, thoroughly data-based, and likely to set the terms of conversation for some time. Bailey suggests at the outset that it is not possible to discuss the reasons for the decline of serfdom until one has established an accurate chronology for it, and that this has not heretofore been done. Even if scholars disagree, as they may, with his conclusions about the reasons, his chronology is likely to find a quite durable acceptance. Much is at stake, as Bailey points out, in the question of when and why serfdom ended, not least the question of who benefited from it. Was villeinage imposed on peasants by lords as an exploitative measure as long as possible, or was it mitigated by custom that protected the peasants and therefore to the disadvantage of landlords who were better off under a system of agrarian capitalism?

In his first chapter Bailey reviews the historiography of serfdom and stresses the importance of knowing what replaced serfdom - not always a purely capitalist system, in many cases copyhold or lease systems that gave tenants relative security in their holdings. He reviews various possible causes that have been proposed for the decline of serfdom - manumission, economic and demographic forces, peasant resistance, migration - in order to measure them against his data.

Bailey proposes to chart the decline of serfdom precisely rather than anecdotally by "chart[ing] the precise chronology of each aspect of villeinage on manor after manor according to a consistent methodology" (11). For one manor, absence of evidence may not be evidence of absence, but the more data one can aggregate the more striking consistent absence of evidence will be. Bailey looks at specific incidents of villein tenure and villein status, such as merchet, chevage and labor services, as well as the language of personal servility. These incidents varied greatly from manor to manor, and therefore he must trace the chronology of disappearance separately for each manor. His overall conclusion that "villein tenure largely disappeared in England between 1350 and 1380, and personal servility between 1380 and 1450" (281) places the change a good deal earlier than most historians have thought. There was little reimposition of the labor services that had been commuted before 1350; in places, the proportion commuted rose, and not largely because of peasant resistance.

The first four chapters of the book essentially present the state of scholarship and the research question before Bailey. The fifth chapter outlines his methodology: a definition of the key characteristics of villeinage (someone holding land on villein tenure, required to render certain payments or services to the lord, and considered inferior in status); a selection of manors of different sizes and held by different types of landlords, with a typology; and a plotting of the chronology on each of those key characteristics on each manor.

The sixth through twelfth chapters present the data in detail, making it easy to reconstruct all his analytical steps. We learn exactly how many people in each year on each manor refused to participate in winter work or gleaned the lord's corn badly. Bailey has a knack for combining the analysis of a large amount of data with human examples. For example, on the manor of Aldham in the late 1360s, a place where there was "no seigniorial reaction . . . in the generation after the black death" (146) and a dramatic decline of villeinage, Nicholas Mervyn and Roger Miller were made to take oaths to the lord after being absent from the manor. "The oaths were unquestionably demeaning in both their public nature and in the conditions they imposed, but they are the only two of their kind, and they were made within two years of each other. As neither man is ever recorded as paying any chevage for his absence from the manor, it would appear that an accommodation had been reached with the estate steward of the day: Mervyn and Miller would not have to pay chevage as long as they returned when called upon to work, most likely during the harvest" (143). This sort of anecdote is not unusual in a work of medieval social history; it is the placing of these anecdotes in a quantitative context that gives Bailey's nuanced argument its power.

Bailey also is very sensitive to the use of language. Historians need to be careful about assuming that a change in the language of legal records (or other documents) represents a substantive change rather than merely a different record-keeper, but with enough data points and a variety of types of sources Bailey can show that the differences in terminology do indeed matter: "the use of 'in villeinage' and 'in bondage' must have been associated specifically with a rent package based primarily on servile services and incidents, and, as that package fell away, so these phrases were discarded" (291), to be replaced by money rents from leases or life tenancies in proportions that varied regionally.

Bailey is careful, too, to distinguish between personal servility and villein tenure, and in several instances, such as on estates owned by the monastery of Bury St. Edmunds, economic circumstances after the Black Death forced the conversion of villein holdings to leasehold but also brought a "crackdown on fugitive serfs in the 1380s and 1390s" (194). On the lands of the Duke of Norfolk there was also an attempt to reimpose personal servility, but it came later, and "do[es] not correlate well with either land values or peasant resistance. The ebbs and flows of enforcing chevage and merchet are best explained by fluctuations in either estate policy or administrative efficiency" (213).

Although the data presented by Bailey is very rich and must have taken him a great deal of time to collect and analyze, it is not comprehensive. He has chosen manors that are "representative of the different types of manor found in England, and . . . located in more than one area of the country," but the two areas are the South Midlands and East Anglia, enough of a concentration in each region to be able to see shared patterns, but not enough to determine regional patterns across all of England. He is very forthright about the fact that larger estates tended to keep better records, but the data he has collected from smaller manors as well is a major contribution of the book.

The Decline of Serfdom is long, and much of it is quite technical. Bailey has done his scholarly readers a great service by putting all his evidence before them, in clear, fully explained tables. They will find, however, that the writing is a bit repetitive. Someone interested only in the conclusions that he reaches and not the details of how he reaches them could read the final two chapters alone; but that person would miss a master class in how to frame questions that can be answered with data, and then answer them.