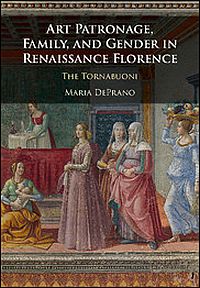 Maria DePrano's richly illustrated book attempts to fill several gaps at the same time. On the one side, she moves away from the long-standing obsession with the Medici family. On the other, she focuses on the female members of the Tornabuoni family, related either by blood or by marriage, to understand the roles they played either as patrons or as those remembered by and in artistic commissions. The author traces particular commissions - or types of commissions - to individual family members, male and female. Although there were sisters, brides and wives to be commemorated by occasional works of art, in fifteenth-century Florence female patronage was still a rare thing and so male family members had to commission and pay for most of the memorial art.

As for the concentration on the Tornabuoni family, Francesco, Giovanni Battista or Lorenzo - as well as their daughters and sisters - married into other leading Florentine families, among them the Medici, and maintained very close familial as well as professional and political relations with them. They were part of a society and culture that valued learning as well as wealth and religious piety. Apparently, they saw no or very little contradiction in the depiction of Christian narratives imitating ancient reliefs or in an interpretation of ancient myths that could be used to celebrate the owners of works of art in a positive, virtuous light, quite unlike the original story line (61-79; 84-102). After all, the Tornabuoni, same as their Pitti, Guicciardini or Medici relatives, belonged to the Florentine elite. They were highly educated, often fluent in Latin and Greek and had already become familiar with an antiquarian culture that would allow for the relatively free reading of ancient material, literary and visual, in a Christian key.

Still, however much the works of art commissioned by the Tornabuoni owed to antiquity or were imbued by Christian piety, they were frequently meant to celebrate family members or family achievements (chapters 1, 3, 6). In the case of females, virtues such as beauty, chastity or fertility (e.g. 67-79) lent themselves most obviously to being acclaimed in diverse media. In many cases, such works of art were made to be appreciated in a domestic setting, for example in the form of medals, of painted portraits, on cassoni or spalliere, all of which would have been viewed and handled privately at home (chapters 3, 4, 5). Even though, as we know, a Florentine fifteenth-century camera or study were less private than their modern counterparts, the visitor still needed to be invited and not all such works could be viewed with the same ease, depending on how and where they were kept. The easiest to view were probably the spalliere, conveniently set at a height to make their appreciation comfortable for the by-invitation-only audience. Medals needed to be taken out of containers, portraits might be hung high up on the walls or behind a curtain, cassoni were low on the floor. While none of these works of art were primarily exhibits, their functions included diverse levels of celebratory display, meant to present their virtuous owners as discerning and highly educated members of the Florentine oligarchy.

While such a private and domestic setting might seem ideal for the display of works of art ranging from bridal chests and other furnishings for the celebration of mothers, wives and daughters, there were other commissions that we would consider public, i.e. frescoes in the family chapels located in the major Florentine churches. Although we can visit and view the Tornabuoni chapel (114-140) these days almost barrier free and may well gain the impression that the frescoes were as publicly available to a renaissance audience as they are now, that was not the case. Church naves were subdivided and cut off by interior constructions such as the ponte or rood screen (126-137, in particular the excellent figs. 6.12-6.16). As is well-known, most of the people attending mass at Santa Maria Novella would actually not have been able to see much of the depictions, nor would they necessarily have been able to recognise Tornabuoni portraits inserted as spectators in sacred scenes such as Ghirlandaio's Birth of the Virgin. Since the chapel's function was primarily that of a funerary space, direct access would have been strictly limited to particular occasions and to a restricted audience.

The above somewhat delineates the complexity of the matters discussed in DePrano's book. While the visual and written source material may address female ownership and patronage, a male relative most likely ordered the actual work of art from the chosen artist. The female sitter for or owner of a portrait or medal was usually celebrated or commemorated as a member of her marital family. The ownership is less revealing of her own taste or personality than complementing those of her husband (79-81). Her presumed virtues enhanced the Tornabuoni family's status. We thus learn very little about the women associated with the Tornabuoni in comparison to the insights gained about the male members and about how they saw their female relatives and attempted to honour their memory.

As it should do, Art Patronage, Family, and Gender in Renaissance Florence addresses and reveals the customs, society and cultural politics of the leading families, among them the Tornabuoni, during the second half of the fifteenth family. The author discusses the commissions and their context and explains the availability of sources whenever necessary. Perhaps some of the chapters would have worked better as stand-alone articles but the book's content is clearly structured with the main focus on genres and objects such as portraits, medals, spalliere, chapel frescoes, paintings and villa decorations. The entire Tornabuoni family and their imagery receive attention, since their patronage and imagery as an extended family would have been the norm at the time. That the author introduces a second emphasis on the Tornabuoni women is to be applauded but it can only work within the greater context of the family and of its societal setting as presented in this interesting and thought-provoking book.