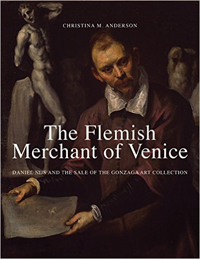 Christina M. Anderson's new book explores what was arguably one of the greatest coups in early modern art collecting, i.e. the acquisition of the Gonzaga collection by King Charles I of England in 1627/8. Like many other families newly on European thrones, the Stuarts harboured ambitions quite beyond survival and consolidation of power: from James I's succession onwards, their favourite aspiration was to create an English empire and to display their might in an appropriately magnificent style. Ownership of a collection of important art works and antiquities was part of this policy. When a collection of renown and pedigree became available, the Stuarts placed a bid.

In keeping with the recent change of focus in collecting history, Anderson's book is not primarily concerned with issues of patronage, dynastic ambition and splendid display. Although Daniel Nijs who acted as intermediary for the sale of the Gonzaga collection to the English realm has long been a household name familiar to everyone engaged in the history of collecting, his precise contribution to the art market was long overshadowed by the fame of the collection, by the execution of Charles I and by the temporary dispersal of his property. Anderson's book uncovers the practical details of the art market in a difficult political climate and brings the Flemish Merchant back to life.

Originally from Silesia, the family of Daniel Nijs had settled in the fourteenth century in Arquennes near Hainault. Having converted to Calvinism in the sixteenth century, they had to leave the Spanish Netherlands to escape prosecution by the Duke of Alva. Daniel remained a Calvinist throughout his life, which may have made his business dealings with some of the Protestant princes somewhat easier but also caused many interruptions and setbacks. He eventually settled in Venice, brokered the Gonzaga sale, went bankrupt in 1631 and moved to London, where he would die in 1647. His greatest achievement, i.e. negotiating the sale of the Gonzaga collection, also seems to have marked the beginning of his downfall: his merchant's emporium never quite recovered from bankruptcy and his reputation continues to be blemished by rumours of double-dealings and dishonesty. In the course of eight chapters dedicated to the foremost features of Nijs's professional personality, the reader is presented with evidence about the role he played through his diverse activities of which the art trade was only one facet.

Anderson attempts to correct traditional though not necessarily contemporary perceptions by presenting Nijs as a merchant and broker, not as an agent in the service of Charles I. Rather than working for a specific patron, Nijs's responsibility was to himself. If he spoke to more than one potential client in the course of his negotiations, it was to accomplish the best possible deal for now and to prepare the ground for successful business in future. By using such an approach to Nijs's career as an independent merchant, much of his alleged "duplicity" vanishes. His long-lasting friendships and faithful allegiances have long painted a different picture.

Perhaps one of the most interesting and valuable parts of the book consists in the description of Venice as a hotbed for the international art trade and its importance particularly for the growth of English collections in the days after Daniel Nijs arrived and settled at the Serenissima (78-97). The commercial ties between Venice and England blossomed with the appointment of English ambassadors, Henry Wooton in 1603 (66-67) and Dudley Carleton in 1610 (81-93), who as soon as they began to understand how important the art market could be for their own diplomatic career, would start to have dealings with Nijs and to add important connections to his network. Although Nijs's business records perished, there is still plenty of archival documentation, for example the correspondence between Nijs and Carleton. These papers attest to the far-reaching activities of this Flemish merchant, to his contacts to Protestant princes engaged in the Thirty Years War and to his own interest as a convinced Calvinist dealing in works of art in current politics (98-114).

Finally, the sale of the Gonzaga collection. Built over decades in Mantua (116-119), parts of it came on the market in earnest in 1627 after repeated attempts to increase cash flow by pawning jewels. Information about Mantua, its architecture and the collections was available in London, not least since Lady Arundel, Aletheia Talbot, could provide an expert eyewitness account since her visit in 1623. Nicholas Lanier, one of the English king's musicians was eventually sent to Mantua. A letter of recommendation from Nijs introduced him to Duke Ferdinando. Anderson's Chapter 6 "The Broker" (115-143) traces the complicated negotiations conducted by Nijs who seems to have considered this deal as his most difficult business contract according to his own words in a letter to Endymion Porter on 27 April 1628 (134/5). This letter as well as its postscript dated to 12 May are proof of the need for caution. At some point the King of England, the Duke of Bavaria and the Grand Duke of Tuscany among others were competing for the collection. The slightest rumour that Charles I was involved would have made the price rise up sharply and the deal less likely to come through, since the king was already in financial difficulties. In particular, the sale of the ancient marbles became tiresome and made Nijs incautiously commit to a price with the potential buyer without having yet agreed one with the seller. Overconfidence, frustration at the endless negotiations and everchanging prices (123-128), or a mixture of both, thus already laid the seeds for Nijs's later bankruptcy and tarnished reputation. Once the selected works of art had been delivered to Venice en route to being shipped to England, it turned out that not everything had arrived, while payment to Mantua proved difficult. The duke's last minute regrets caused further delays, since he wanted copies to be made; luckily, in Venice there was no lack of painters able to do such a job (130-133). In the end, the complications besetting the conclusion of the first part of the deal led to the interruption of negotiations for the second. Shipping of a first batch of paintings started in the spring of 1628 and after the death of Vincenzo Gonzaga had suddenly put a different spin on negotiations, in particular those regarding the marbles. By early autumn 1630 all the pieces destined for the English court had been sent to London - the final group aboard the Rebecca - despite further financial complications and the threat of litigation by Philip Burlamachi, merchant in London and financier to the English Crown (141-143).

If all seemed to be well for a while, this impression proved an illusion. The English king was in possession of some of the greatest treasures in his collection. Daniel Nijs had concluded one of the greatest deals in the history of collecting. However, Charles I was in financial and soon also in political trouble; he would enjoy his purchases only for a few years. Nijs was going to go bankrupt less than a year later (144-163) and the royal financier Burlamachi a couple of years after that. By the time Nijs declared bankruptcy, he was still owed a sizeable amount by the English Crown. Problems with bills of exchange had plagued Nijs since 1630. In the light of the documents available, it is rather difficult to trace which sums of money had actually been forwarded to and received by Nijs. Anderson comes to the conclusion that in order to protect the deal and his business operations, Nijs must have held back some works of art to force the English court to pay him his dues.

Things came to a head, when a group of works of art from the Gonzaga collection were discovered in Venice, although they really should have gone to London (150-152). The discovery happened when Nijs invited his creditors into his house in May 1631. These objects included paintings by Titian and Raphael as well as antiquities. At the time, Nijs claimed that he was unaware that the pieces were still on his premises. Twentieth-century historiography has emphasised this incident to point at Nijs as a cheat. What may have happened instead, was the dealer's attempt to use these works of art as an insurance policy against the Crown's failure to pay the agreed amount to the full. Whether the objects had been forgotten in the warehouse or whether Nijs was still holding out for payment, the English king did not take it amiss and finally paid his debts. While some of the creditors in Venice treated Nijs rather ungenerously, the broker continued to enjoy the respect and good will of the king and of his courtiers (155-156).

Nijs spent years travelling across Europe in an attempt to earn enough money to clear his debts and to be able to return to Venice. By 1639, he was finally able to settle his affairs in Venice but he spent his final years in business working for Lord Arundel in London, where he would die penniless five years after the onset of the English Civil War (1642-1651). Thus, he concluded his career in a realm where his former patrons had either been arrested or had been forced to leave for safer territories. Nijs's greatest commercial gamble, brokering the sale of the Gonzaga collection, finally became his nemesis, the cause for his financial downfall and the starting point for an enduring character assassination, which Anderson's study, one hopes, may have finally stopped and revised.