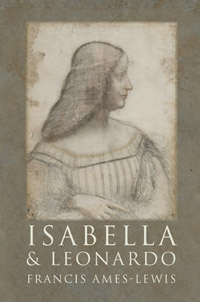 Isabella d'Este and Leonardo da Vinci share the centre stage in Francis Ames Lewis's new book whose genesis goes back to the idea for an exhibition that never was. Originally focused mostly on the work of Leonardo, Ames Lewis's consideration quickly swerved to Isabella's patronage and personality at the expense of the enigmatic artist (viii): even in the title of the book Isabella's first name is followed by that of Leonardo. Over the course of six chapters we learn about their artistic relationship, including the exchange of letters, commissions, drawings and projects and a lengthy stay or two of the artist in Mantua. One of the fruits of this relationship was Leonardo's intriguing portrait drawing of the marchioness that graces the front cover, showing her in profile, facing left, in the way Roman emperors or male Italian nobility would have been portrayed.

Being a girl doomed to be intelligent in late fifteenth-century Ferrara and Mantua cannot have been easy. [1] The fact that Isabella d'Este and her intellectual pursuits continue to attract the interest and admiration of historians of the twenty-first century, attests to the pluck and aplomb with which Isabella moved in a world dominated by men and managed to get most of the things she wanted. The marchioness of Mantua was an exceptional person as regards her thirst for knowledge and art, while her aspirations were helped along by her no less formidable mother, Eleonora of Aragon, and by the fact that - even though by the second half of the fifteenth century women may not have had a Renaissance - literacy rates among women had started to rise and that news and ideas were increasingly sure to find their female target audience. [2]

In a way it seems unavoidable that one of the most avid collectors was going to collaborate with one of the most accomplished and avant-garde artists of her time. Isabella was well versed in the art of the paragone (20-23 and 166-171) and fully aware of the incursions her cultural politics and artistic commissions were making into traditionally male territory (15 and ch. V passim). In particular her expensive collection of antiquities was likely to cause comment [4], for such pieces were regarded as the prerogative of kings who used such possessions to legitimise their particular claims to rule. Collections of antiquities, such as the Gonzaga collection purchased by Charles I of England, quickly lost their ideal value after his execution and (at least for a time) was seen as a mere group of costly but broken-nosed statuary.

Leonardo plays his part in each of the six chapters, while Isabella easily dominates them all and in particular IV and V that are the most interesting, both separately and in connection to one another. Chapter IV discusses Isabella's commission to Leonardo for a portrait drawing, probably already with a second, painted portrait in mind (110-119). In addition it traces her "career" as a sitter from early childhood onwards and her own expectations of what such a portrait should convey of her in terms of likeness, personality and special qualities such as intelligence and nobility (106-109).

Renaissance portraits were not meant to be exact or revealing likenesses but they needed to be recognisable depictions of the sitter. They also had to fulfil a range of functions; being sent on a diplomatic mission to foreign courts was one of the most important. Even though Leonardo never painted his patroness's likeness; the two surviving versions of the drawing attest to the unusual requirements of Isabella, while the drawing in the Louvre demonstrates the extraordinary skill employed by the artist.

Ames Lewis discusses the autograph drawing and subsequent versions in the context of female portraiture at the turn of the 15th/16th century. Isabella's copious correspondence with agents, art dealers, artists, peers, friends and family allows us to follow her decision-making process in a way that sums up existing discussions of female portraiture [4], while at the same time explaining the startling novelty of her commission to Leonardo. Women of Isabella's class were usually portrayed to launch them on the marriage market or to commemorate them after their (early) death in childbirth as an ideal example of noble womanhood. In the years just before 1500 Isabella, however, opted for an aristocratic portrait of herself as a woman in command which reinforced the imperious message of her portrait on the medal executed by Gian Cristoforo Romano in 1498 (106f.).

This representation was corroborated by her rich collection of antiquities and of all'antica works of art, first displayed in the studiolo and later also in the two grotte. In her desire to purchase and commission such pieces, Isabella sought the comparison to and entered in competition with her male peers whose possessions she would snap up without hesitation provided they were good enough. Interestingly, she employed Leonardo's services also in the projected acquisition of ex-Medicean hardstone vases available in 1502.

Asking for drawings of these much coveted antiquities, she wished for documentation in order to form her own opinion regarding their quality together with her court artists (163f. and 173-177). She may also have hoped for the considered opinion of Leonardo as a first-hand witness. Asking artists for advice may not have been such an unusual modus operandi when buying expensive items at a distance but Isabella's insistence to understand fully what she bought and her curatorial decisions to buy, not to buy or to change acquisition policies altogether must have been prompted by a rare level of connoisseurship. In addition, it also singled her out as one of the very few female collectors of her time. In the sixteenth century there would be further examples - Eleonora of Toledo, duchess of Florence and Siena, and her daughter Lucrezia, duchess of Ferrara, come to mind - but few as knowledgeable and active as Isabella.

Richly illustrated, this book offers compelling insights into the working relationships between Isabella and the artists she employed, beyond Leonardo. More than anything, though, Ames Lewis has been able to portray Isabella's quick-witted personality that was shaped by the models of her mother, her mother's family in Spanish Naples and by the example of Isabel I on the Iberian Peninsula. Thus the author (indirectly) raised the awareness for an important group of aristocratic ladies with Hispanic roots and for their particular brand of cultural and political luggage which they took with them as dynastic brides to many a European court.

[3] Cf. The publications by C.M. Brown on the subject of Isabella's collection of antiquities, for example his "Lo insaziabile desiderio nostro de cose antique", in: Cultural Aspects of the Italian Renaissance, ed. C.H. Clough, New York 1976.