Elizabeth Goldring: Robert Dudley, Earl of Leicester, and the World of Elizabeth. Painting and Patronage at the Court of Elizabeth I, New Haven / London: Yale University Press 2014 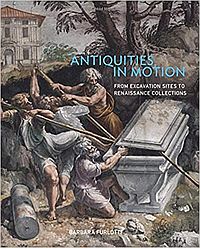 When the Chimaera of Arezzo was discovered in late 1553, the Duke of Florence immediately ordered that the bronze lion be delivered to his collection. Cosimo I was so impressed by this particular work of sculpture that he gave it pride of place in the Hall of Leo X in the new state rooms of the ducal palace and also spent many nights in the company of Benvenuto Cellini cleaning the small bronzetti found with the Chimaera. The large bronze not only sparked lively discussions about its subject matter, inscription and provenance; soon ducal agents searched in Rome for an ancient coin with a comparable image. Bernardo Minerbetti, bishop of Arezzo, wrote to Vasari to tell him about the fortuitous discovery and the professional opportunity it might create for the Aretine artist and architect who, in due course, defined what he called the "maniera etrusca" (Etruscan style) using the Chimaera as his prime example. Nonetheless, by 1560, as soon as the duke's relationship with papal Rome - as well as his financial situation -improved, Cosimo turned to Roman marbles to increase his collection, apparently losing all interest in Etruscan pieces that had so far constituted a large group among his antiquities.

This episode within the history of Duke Cosimo's Florentine collection - well-known to those of us engaged in research on early modern antiquities collections - throws light upon a number of important issues in relation to the journeys travelled by ancient objects between their place of discovery and eventual location of display. Often found by chance, they would either be in danger of destruction for their material worth or be claimed by a wealthy collector or ruler over the territory of discovery. Since it was not always clear what the work of art represented, scholars studied ancient sources while agents looked for comparable antiquities. Inscriptions hinted at matters of provenance and piqued the interest of antiquarian linguists. The newly discovered antiques required cleaning and restoring, but not every artist was keen to do this kind of work, unless the quality of the piece was particularly convincing or the restorer could expect exceptional rewards.

Barbara Furlotti's recent book Antiquities in Motion explores many of these issues. While the focus is mainly on sixteenth-century Rome as a major place of discovery, trade and collecting of antiquities, the Roman situation extends to many collectors and collections throughout Italy, mainly Florence, and abroad. By concentrating on the "practicalities" of collecting, such as modes of discovery, cost and means of export, she seeks to complement research on the history of collecting and display aimed at reconstructing collections, the artistic and architectural framework in which they were exhibited and the possible interpretation of the collectors' scope and intentions. If the study of inventories and architectural settings is difficult and often frustrating enough, it is no secret that the pre-display history of collecting items has to be pieced together from little snapshots and rarely includes the full picture for each individual piece.

A great deal of the available information has been "buried" in other works on the history of archaeology and collecting up to now. The usefulness of Furlotti's book lies precisely in bringing together so much information and in combining it with more recent archival discoveries so that it offers a complementary, yet essential, parallel narrative that is not so much bywork but a first layer, i.e. the basis on which the history of collecting and display may come to rest. This narrative will stimulate further debate and research in the personnel involved in the discovery of antiquities (frequently poor peasants) and in the trade of "medaglie" (ancient and all'antica coins and medals) and other ancient works of art that required excavation and export licences. It is useful to be reminded that the hunt for antiquities included all kinds of objects far beyond works of sculpture and that licences might be granted to men and women, even foreigners, in search of income. Since in Rome a considerable cut went to the Camera Apostolica, the antiquities trade enriched the Catholic Church, herself the owner and user of many ancient works and monuments. Following the money trail is always a sensible thing to do and, in this particular instance, helps to point out a general lack of scruples and treatment of (priceless) antiquities as if they were a mere commodity in need of marketing. And they often were at the time, when they could even be considered nothing more than raw material for modern works. Indeed, one must not forget how long it took to arrive at rules and laws to protect ancient objects.

Even the most highly appreciated antiquities, to which renaissance artists flocked for study and inspiration, were objects that needed to find their way into specialised collections. To get there, they needed to be cleaned, restored, sold. Agents and traders benefited from a heated antiquities market but faced serious problems, when a large work needed to be shipped to its new owner. It was not uncommon to saw pieces apart, sometimes to make two out of one, but in general to avoid breakage during transport that would be more difficult to mend than a clean cut. Diverse forms of transport were used for reasons of cost, commodity and safety. Shipment by water was cheaper but did not necessarily reach the final destination; in the best case the journey's last stage needed to be undertaken by land, while in the worst the cargo would be intercepted by pirates or sunk by storms. Furlotti's painstaking documentation of these processes from published and archival sources is indeed a valuable contribution to knowledge. While the book includes an archival appendix of seven documents, a full bibliography would have been as welcome to those wishing to undertake further research on this important topic.

From the moment of discovery to their (one hopes safe) arrival at a place where they would be admired by connoisseurs, antiquities lived precarious lives. We can only guess how many were destroyed, willingly or not, until antiquarian research helped to create the necessary climate for increased appreciation. Up to then, the antiquities trade was part of renaissance economy, in Rome and elsewhere, with many of the people involved belonging to the lower classes and little interested in scholarly or artistic debate, even though they may have had an intuitive or experiential understanding of ancient objects and of the most likely places in which to find them. It is important to understand this fact as well as their aims, which also had little to do with the collectors' intentions or with our own, much later, perception of what we now consider their historical, artistic and monetary worth. By giving a voice to the people who searched for, discovered and handled these works of art, Furlotti therefore takes an important step towards a better and fuller picture of the world of antiquities in sixteenth-century Rome.