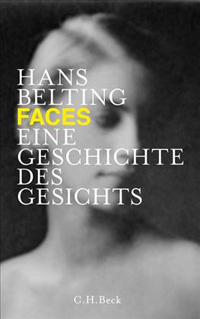 The face, das Gesicht, is by definition and etymology something that can and has been seen. It is as much in the eye of the beholder as it is part of everyone's head. It acts as gateway for information, communication, emotions and food of every kind. It hides as much as it reveals. We become recognisable by our face, even though it changes during a lifetime and may be viewed in a range of diverse modes, depending on the underlying culture of each face's owner as much as that of its beholder.

Moveable and ever changing, the face is notably hard to pin down in a depiction, whether painted or sculpted. Even the advent of photography and moving pictures has not necessarily helped in giving a true likeness of someone's face. Some people are photogenic, which means that they have the kind of face that can be frozen into what it looks like during a split-second without losing anything of its charm and beauty. Many others are not, for what gives their face its special appeal is the animation and lively intelligence that is purveyed and perceived through movement of muscle and eye.

When the face is still, for example as a mask or a portrait, it turns into an image, a term which derives from the Latin word imago. Imagines were the wax masks of a family's ancestors preserved in a shrine at home to keep their memory alive but also to attest to the longevity and thus importance of one's gens. Today, one's image - that which one wishes to present to the outer world - may be protected by copyright and even be used to advertise a particular brand of products. This kind of 'image' in its double sense is similar but not the same as a mask or a portrait.

To write a history of something as commonplace as the face requires originality and intrepidity in equal measure. The endeavour can go too far in the direction of discussing physiognomy and phrenology which, after all, used to be regarded as scientific disciplines - at least by some (83-97). It also means that a huge sticky toffee pudding of material, relating to a topic on which everyone has an opinion, needs to be dissected, viewed, sorted, categorised and presented. It is the kind of subject matter that spans millennia, disciplines, materials and cultures worldwide. Can it be done? Does it even make sense to try?

Belting has certainly made a gallant stab at an investigation that took him a decade to complete. Aware of the issues and possible pitfalls (7-24), he has outlined three large themes that take the reader on a journey ranging from a discussion of face and mask to a comparison of portrait and mask and finally towards the consideration of media and masks, in particular the impact of new media in the twentieth and twenty-first century. The three parts and 21 chapters are organised across disciplines, across geographical, cultural and chronological borders as well as across media so that they may offer the broadest possible (between the covers of just one book) range of topics and avenues of research, many of which will no doubt be picked up and considered more in detail by him and other scholars in the years to come.

Obviously, some of the themes explored in this study have been the subject of debate for a long time, basically for as long as humanity has engaged in portraiture, in rituals of memorial culture, in expressions of religious concerns be that in church or (ancient) theatre (63-83). Official portraiture meant to display one's best side, sometimes literally for painted portraits used to be in profile until the fifteenth century, creates at the same time an interface with the target audience but it also offers a surface that can serve as the point of aggression or, more dangerous still, subversion. The official portrait, say of a Roman emperor or Renaissance princess, can be imitated to the point of a stolen identity but it can also be used in a game of lending one's own face to a long-dead sitter (128-133). Masks of dead people are known to have been used for creating posthumous portraits, for example of Bia de' Medici (Uffizi), but the example of Gertrude Stein's portrait shows, perhaps, that Picasso may have preferred an Osuna mask to her real face. In Man Ray's photography of Gertrude Stein sitting next to her painted portrait the resemblance, at least as far as the expression is concerned, between her and the finished product is striking (199-201).

Icons are meant to present the true likeness of a saint, even of the Virgin Mary and Christ; in theory all renditions of such holy faces go back to the ancient prototype, painted by St. Luke or impressed on the cloth offered by St. Veronica (148-156). Today, the term icon usually refers to small symbols on our computers or to celebrities who became film and fashion icons and are worshipped for their beauty and style as well as for being as little like ourselves as any human being can possibly be. Not surprisingly the film and print media industries have developed the category of the diva for the front cover of magazines who is little more than a clothes horse and can be exchanged for Grace the dummy without noticeable ill effect (218-221). And, there is of course a divo as well, sometimes a male counterpart of the most surprising variety, whose lack of beauty may be compensated by money, power, or a combination of the two.

The consuming power of such a "Mediengesicht" culminates in the artistic treatment afforded to photographic portraits of stars and dictators (226-233 and 283-294). Even though presumably Marilyn Monroe and Mao had otherwise very little in common, today their iconic portraits are not only omnipresent in art and history books, they also have become part of our collective memory. They are recognisable in a way that the real person's face may not have been with a different make-up or hairstyle. Once Andy Warhol had superimposed his particular style and turned each icon into a series, they became almost interchangeable as the work of a particular artist rather than uniquely separate as the individual face or even less so as the expression of the sitter's personality.

It is the spirited juxtaposition of faces from all eras as well as the rich quantity and interesting selection of illustrative material that gives the book its wide-ranging appeal and invites the reader to browse different sections to draw new parallels. There is no doubt that this book will become a popular addition to many a bookshelf, for even though it is best enjoyed in bite sized doses, the subject matter is endlessly fascinating and each chapter encourages further rumination. After all, the book is as much about the human Gesicht as well as about humanity and the human wish to be special.