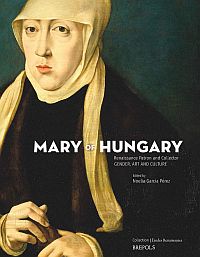 If we consider how essential the daughters, sisters and foreign dynastic brides were for establishing the Habsburg dynasty - and how much pride this family took in its successful marriage policy - one may well wonder why there still seems to be comparatively little written about these ladies in modern (art) historiography. While Margaret of Austria, daughter of Emperor Maximilian and aunt of Charles V, has so far received much of the available limelight, the time seems to have finally come for Mary of Hungary. The new volume in the Brepols series 'Gender, Art and Culture' is the outcome of the conference Art, Power and Gender: Mary of Hungary and the Patronage of Art in Renaissance Europe held at the Department of Art History at the Universidad de Murcia. The book takes a detailed look at the art patronage and collecting activities of Mary, sister of Charles V and Ferdinand I, as well as wife, then widow of the last King of Hungary, Lajos II Jagiellon. The chapters also investigate the political involvement of Mary in the Kingdom of Hungary and in the Netherlands, in which she would serve as governor. Although not always happy in this role during difficult times, Mary acquitted herself so well that her brothers kept her in office despite frequent entreaties to let her resign.

Mary was born in Brussels in 1505 to what had then become one of the most powerful dynasties in Europe. It was also one of the most international and multicultural families of its time. Mary's grandparents had been Emperor Maximilian and the Burgundian Mary the Rich, her parents were Philip the Handsome and Joanna of Castile. Her aunts, sisters and cousins married into the international high aristocracy, bringing with them their own cultural heritage and adopting the customs of their new courts. In particular, the strong political influence of Trastamara Spain proved to be both powerful and long-lasting; it taught Mary and other female relatives about the possibility of strong queenship. Burgundian court culture and etiquette as well as the luxury goods produced and displayed in the duchy, may have provided the inspiration for her collections and conspicuous consumption.

The Habsburgs were important collectors and knew how to use these possessions to their own best political and cultural advantage. Maximilian's treasures are depicted on Dürer's Triumphal Arch; Ferdinand I founded a kunstkammer building in Vienna in 1558; Rudolph's Prague kunstkammer was to be the envy of Europe. Mary of Hungary could draw on the examples of her male relatives but also imitated the collections of Margaret in Mechelen. She even appears to have continued collecting trends and forms of display originally developed by her aunt. After establishing a permanent court at Coudenberg Palace in Brussels in 1531, Mary set herself up as art patron and collector despite very limited financial means. As the present volume documents, three of her favourite media were books, tapestries and paintings, in particular early Netherlandish and Italian High Renaissance paintings, and the portraits of family members. In addition, Mary was a bibliophile as well as an enthusiastic lover of music. She was well aware of the opportunities offered by a judicious use of cultural politics underpinned by the material culture of collecting items. When she finally retired to Castile, she carefully chose what to bring with her to an unfamiliar place. For example, the famous Jan van Eyck Arnolfini Double Portrait, once owned by Margaret of Austria (and now at the National Gallery in London), came with her to Spain and was inventoried in Cigales in 1558. On Mary's death, all her possessions were meant to go to her brother Charles. Since he had died shortly before her, her goods were however inherited by her nephew Philip II and became part of the Spanish royal household. They are included in the inventories preserved, for example, at Simancas and Madrid.

Mary was a strong-willed person who refused to marry again after being widowed by her husband's death at Mohács in 1526. Her widows weeds gave her additional status as the former Queen of Hungary. As governor of the Netherlands she proved herself to be a strong and reliable political partner of her brothers and, certainly in the case of Charles V, she also became an important and trusted advisor in cultural matters. Although Charles may not have been the moron as which he has long been described, he received works of art as gifts rather than commissioning them. His personal interests were directed towards arms and armour, scientific instruments, fortresses rather than palaces, state portraits rather than private mementos. His inventories nonetheless attest to rich and varied possessions including jewels and tapestries but it is difficult to ascertain whether such a mass of luxury goods was the result of planned collecting activity. Mary appears to have been helpful in negotiating commissions that were to preserve his image as a pious but victorious emperor for posterity. For example, although Charles may have dealt most of the time directly with Titian as creator of his portraits and religious paintings, Mary ordered the 1548 Mühlberg portrait from the artist. It also seems to have been Mary who was behind the creation and day-to-day supervision of the production of the Tunis Tapestries, a major series with high material as well as propagandistic value, for her brother.

An outstanding example of Mary's own commissions in terms of cost and propaganda, not to forget artistic importance, was the tapestry series of the Labours of Hercules. Mary shared a predilection for arazzi with most of her princely contemporaries. Indeed, many (sets of) tapestries were produced in Brussels and sold to the most important courts in Europe by the weavers and merchants, Willem and Jan Dermoyen, who also supplied the rich collections of Charles V and Mary of Hungary. In Brussels, Bernaert van Orley's workshop provided some of the most successful designs, re-edited several times over, one of which was probably the source for the Hercules series. Whether based on Boethius' Consolation of Philosopy or another written source, Mary most likely had more than a faithful depiction of an ancient myth in mind. As may well have been the case, since Charles V and his grandfather Maximilian I had long been identified with the hero, the set of tapestries - displayed at the Coudenberg Palace before being sent to Spain - may have contained allusions to her brother as well as to the heroic labours executed by the house of Habsburg since the days of Maximilian. It is not impossible that the Hercules set also combined fifteenth-century legends related to the Catholic Monarchs with those favoured by the Austrian Habsburgs.

Mary of Hungary seems to have had a mind of her own and to have understood the power of widowhood. She commissioned her own sculpted portraits from Leone and Pompeo Leoni and in painting from Jan Vermeyen. Produced in several versions they show Mary dressed as a widow - as someone focused on more important issues than fashion and courtly distractions. Her austere attire and demeanour were integral to her public persona as regent and most of these works of sculpture may therefore be regarded as state portraits. A project related to state portraits was a sculpture gallery at Binche, in which plaster casts after ancient works were to be combined with family portraits to create the kind of statue exhibition favoured by royalty throughout Europe. Perhaps the Leoni portraits however also hint at Mary's early interest in religious reform.

Already familiar with works by Erasmus, Mary became the recipient of his De viuda christiana in 1529. She had been an admirer of Erasmus's writings from her youth when her education had combined influences from her aunt's court at Mechelen with the teaching she received in Innsbruck and Vienna. Mary also expressed interest in Luther and his ideas during the early years of her marriage. In 1526, Luther dedicated his Four Psalms of Comfort to her, at a time when it seemed possible to gain the support of the Queen of Hungary for religious reform. Nonetheless, after the death of her husband and while trying to escape the Ottoman Turks, Mary experienced yet another cultural and religious shift when told to settle in Flanders. Here, her own modern library - including a very few works saved from the Hungarian Royal Library - was soon enlarged by that previously owned by her more traditional and dynastically aware aunt Margaret.

With Mary of Hungary's patronage as the theme, the present book touches many of the topics dear to the hearts of historians of collecting, court historians and art historians. As a member - by birth and marriage - of several of the highest-ranking families in Europe and as sister to two subsequent Holy Roman Emperors, she was well connected and became an important patron and collector who - at least in part - also managed the cultural politics of Charles V. From the chapters Mary emerges as a strong and intelligent woman, quick of mind and character, who was nonetheless restricted in her choices by dynastic and political requirements. A major concern seems to have been the relationship with her siblings. As a woman interested and engaged in the most up-to-date ideas and trends of her times, she introduced aspects of modernity into her court life, which could have been developed more fully had she been male.

The present book gains from its international cast of authors including well-established specialists in the collecting history of Habsburg women, as well as authors with a particular focus on music, book history and the applied arts. The context of Mary's biography and family connections provides the background for her artistic commissions and explains her choices from the days when she was trained for the roles as Queen of Bohemia and Hungary to the moment when she retired as governor of the Netherlands and moved to Spain. At least as interesting as her two imperial brothers, Mary deserves all the attention given to her in this volume and one hopes that there will be further, in-depth studies in future.