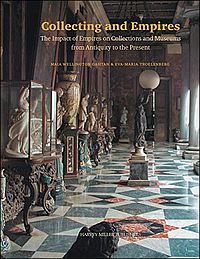 Empires and collecting are connected by their very natures. During the building of empires, collecting creates identities. The conquest of empires and looting of collections equals an act of military and political submission. Such a fate could befall the same collecting items repeatedly during their long biography. After changing imperial owners, usually through war and theft during antiquity or later times, they also frequently ended up in European museums in the wake of modern military or excavation campaigns. Think of the wars in the ancient Near East, as a result of which works of art were taken, displayed and retaken thousands of years ago but are now displayed at the Paris Louvre and at the British Museum in London. Then as now, imperial collecting was not only essential for an empire's identity, it also established (counterfeit and therefore fragile) dynastic pedigrees through galleries of rulers' portraits and the foundations of a political narrative based on the longevity of power by means of the antiquity of collecting items.

While not all empires were equally successful in presenting their collections as a justification for their political aspirations, it is hard to think of an empire that did not understand the potential of a collection with objects "acquired" from far and near. Among some of the strongest competitors for the first rank of empires were the Holy Roman Empire, ancient Rome and the British Empire. They maintained important collections of an almost global reach to underpin their continuing ambitions of power, even though the respective ruling dynasties might change along the way. All three cases, however, present European empires expanding towards what would then have been the outskirts of the world: Africa, the Americas, Asia and Oceania.

During the process of expansion, such notable empires came into contact with other empire builders: at home and in the colonies as economic competitors (Dutch Republic vs. Portugal), at their borders under threat of military invasion (Holy Roman Empire vs. the Ottomans), further afield as a coveted promise of fabulous riches (Mughal India or Aztec Mexico). Apart from wars and uprisings, such encounters also resulted in the exchange, trade and theft of (luxury) goods and collecting items. One must not forget though that the above empires were not the only ones seeking expansion and treasures but that there existed (and exists?) a general outlook shared worldwide. Each empire sees itself in a presumed centre (e.g. the "Middle Kingdom") with a drive to conquer and collect which is aimed at neighbours in presumed peripheries.

Collecting and Empire acknowledges the diversity of collectors and collections and therefore presents eighteen chapters - based on conference papers held in Florence in 2015 - discussing collections, museums and empires across the world, ranging from collecting in ancient Assyria to the effects of "colonial" collections in today's European museums. In this context, collecting and collections may be understood as an expression of identity but also of an imperial claim to power through alleged cultural hegemony. Alternatively, cultural takeover goes hand-in-hand with military conquest. The conference volume consequently attempts to analyse a wide array of empires and their respective material cultures as well as how empires, their cultural politics and collections may have influenced each other.

As a result, the discussion of Habsburg Imperial Collecting is complemented by important insights into Dutch colonial collections, i.e. into the cultural politics of a Republic managing colonial and cultural exchange at the other end of the world. While the activities of the VOC brought exotic plants and animals home to the Dutch Republic, and hence to other parts of Europe, they in turn also exported personnel, customs and collections to the colonies. As would be the case for example in British India, companies of Merchant Venturers prompted the building of exotic collections back home as well as of European collections (drawings, portraits, landscapes as well as objects imported from other colonies) in overseas possessions, set up by colonial societies but also influencing indigenous societies. Interestingly, at least in Batavia and probably due to the enormous distance from home, many collecting items had not been brought there directly from Europe but needed to be commissioned from artists settled overseas.

Centuries before India became the Jewels in the Crown of the British Empire, the Mughal Empire had become a major cultural force on the subcontinent and used collecting activities and modes of display to its advantage. In the early seventeenth century, Emperor Akbar owned a rich and well organised treasury described by his court historian as well as by the East India captain and merchant Sir William Hawkins. Large gems and jewelled objects formed an extravagantly luxurious collection to express the rulers' ambitions to have Mughal government be recognised as a Golden Age. In addition, illuminated manuscripts from the imperial library were organised in accordance with categories such as cost and content with the aim of establishing a dynastic connection between Mughal emperors and the earlier (fourteenth-century) house of Amir Timur. Since many of the objects collected by Emperor Jahangir correspond to the naturalia and artificialia found in European kunst- and wunderkammern, it seems fair to say that the expression of imperial ambition in seventeenth-century India was no different from what happened in Europe as far as the collecting of rare and precious objects and their prominent display to further one's aspirations were concerned. Collecting and display also served to underpin far-reaching political connections as well as the cultural exchange with other global powers.

Often collections such as these were eventually broken up and scattered across the world. Many of the works once in the Mughal library are now preserved in European collections and museums, where they still tend to be displayed under labels probably no longer appropriate in our global and multicultural age. Collections of Islamic art seem to be influenced by nineteenth-century traditions of Orientalism and thus present a unilateral European view. Exhibitions of Islamic Art, i.e. art from regions of Islamic hegemony, may thus be understood as the result of Western cultural appropriation of Eastern visual culture informed by ideas of colonial conquest and an aesthetic appeal of the exotic. Still, in the wealthiest countries ruled by Muslim dynasties, new displays of Middle Eastern and European art also tend to be set up in accordance with Western examples, see the Louvre Abu Dhabi.

What the volume certainly makes clear is the existence of a world-wide and age-old "Imperial Style of Collecting" that distinguishes between monastic and royal collections and their modes of display and types of audiences as well as between the diverse aims of public and private collecting. Some princes may have been as attached to the objects in their collections as private scholars but there were norms and standards ruling the collecting and display of royal and imperial kunstkammern and galleries. Collections had to be rich and varied but also consist of an international array of objects sometimes imported, sometimes looted and frequently donated as part of a diplomatic etiquette connecting empires throughout the world. Therefore, surprisingly multinational and multicultural combinations of objects were exhibited in collections (and eventually museums) of variable provenance. What united these collections was the close connection between objects and identity for the outward presentation of political aspirations. Although the geographical and cultural centres of collecting shifted in accordance with the centres of empires, the aims and scope of collections remained similar and comparable historically as well as globally.