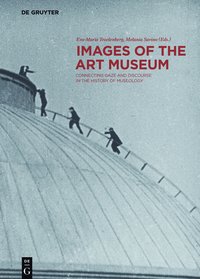 The edited volume Images of the Art Museum. Connecting Gaze and Discourse in the History of Museology by Eva-Maria Troelenberg and Melania Savino contributes to the growing discourse on art museums by taking a fresh look at the basic tension that has marked the institution already before its modern formation and underscores its latest global and technologically networked transformations. The editors see the tension spanning two competing notions of the museum condensed in the images of the art museum as a temple or as a forum (1) that continue to shape visitors perceptions and the museum's self-perceptions alike.

16 contributions by 21 international scholars explore a temporal frame from mid of the 19th century until today and introduce an expanded geographical scope, including innovative case studies of museums as far apart as Kassel, Tbilisi, Cape Town, Banaras, Aundh, or Athens, Florence, Brisbane and Philadelphia when examining the intertwining of both notions. Their insightful responses to the leading question "how has the image of the museum been rhetorically framed, used, created, and circulated since the mid-nineteenth century" (16) consist of critical explorations of various media and archives. The authors work with visual and textual narratives of influential early museographic magazines, specific curatorial and collecting practices, mediating strategies chiefly related with photography, but also explore cinematic and virtual web-based representation, particular institutional histories, and other intermediary relations.

A striking feature of the book is the dominant use and analysis of photography as prime medium for the expression of museum images and their construction. It can therefore also be "read as a parallel thread to the history of photography" (10) with enlightening side stories about the coming-into-being of the installation shot, changes due to color photography or digitalization. The instructive array of black-and-white illustrations embedded in the body text as well as selected color plates in the appendix add to the appeal of the volume.

Most articles engage with one of the two lenses that the editors highlight in the subtitle of the volume, i.e. "gaze" and "discourse" in the history of museology. A good example is Julia Kleinbeck's "Double Reflections: Art Museums and the Image of the Beholder" (155-170). Her engaged analysis follows the editors' reference to Margaret Olin's [1] definition of the "gaze" as a term, which "leaves no room to comprehend the visual without reference to someone whose vision is under discussion" and consequently considers "the gaze towards the museum as a productive instrument of knowledge production, but also as a mode of institutional critique" (7-8). Indeed, Kleinbeck shows how visitors implicitly challenge the institution and advance their power position by literally picturing their relation with the museum and re-mediating it through selfies posted in social media. The recent practice increases the long-standing gap between the visitors' creative framing and the partially outdated ways in which the institution portraits itself. Kleinbeck's analysis points to the contemporary transformation and on-going urgency of a basic conflict that already marked the post-revolutionary establishment of the art museum in France as Martin Gaier shows (40).

Gaier re-considers Quatremère de Quincy's sharp critique of the museum's de-contextualizing strategies as an early call to "retain the delicate, deep, melancholic, sublime, and touching feelings that surrounded them [the works]" [2] with which Quatremère pointed to the "loss of the absorbing, provocative, rousing but also civilizing power of artworks that accompanies their [...] dismemberment" in the museum (39). In contrast, Kleinbeck's analysis shows that contemporary visitors appreciate the freedom that comes with primarily aesthetic displays still following the notion of the museum as a temple and relying on the "novel 'ritualistic structure' that the museum cultivates" (164) according to Carol Duncan. [3] They re-configure their individual relation with the exhibits in mass-mediated ways that even transgress the intermediate positions of contemporary artists such as Michelangelo Pistoletto or Olafur Eliasson who explore participatory approaches to project and change the relation between visitors and institution.

Many contributions also foreground the role of "discourse" by digging into various archives of museum-related agents and their (historical) impact in imagining and imaging the institution. Lynn Catterson's meticulous study "Stefano Bardini and the Taxonomic Branding of Marketplace Style: From the Gallery of a Dealer to the Institutional Canon" (41-63) is a case in point. She carefully traces the considerable impact of the Florentine art dealer and his clever marketing as well as publishing strategies. They ultimately shaped what newly establishing museums in Europe and North America put on display in their Renaissance sections after 1860s.

Resonating with artists who amplified metaphors of the museum beyond the temple or forum - such as Jean Cocteau describing the Louvre as a "morgue, where one goes to identify one's friends" or Fred Wilson's take of the museum as a "mine" (3-4) - the editors methodologically relate their stance with so-called New Museology, which emerged in the 1980s informed by structuralist and post-colonial philosophy. The particular achievement of the volume is that it combines historically informed and critical cultural perspectives, starting with the observation that "the classicist implication of both the temple and the forum metaphors already hints at the strong heritage of enlightenment humanism, and thus at the significance of the museum as an idealistically charged institution of modern Western civilization" (2). Acknowledging and studying the particular epistemology that comes with the modern art museum in this region and then circulated in colonial and imperialist contexts, the volume counters a universal, linear or binding (master-) narrative of the institution. The editors emphasize the "heteroglossia and polysemy of our museum world" in turn, claiming that it "represents a status after the 'global turn'", which necessitates a discursive differentiation in increasingly polycentric perspective (7).

This becomes clear when considering the commonalities and differences of exemplary settings such as colonial India as opposed to Greece in the 1990s. While Deepti Mulgund delineates the complex relationship of an incipient, yet still colonized nation and the museum by exploring the funding of two ambitious art museums in Banaras 1920 and Aundh 1932 (213-237), Iro Katsaridou and Anastasia Kontogiorgi show how nationalist narratives and identity politics appealed to Athens National Gallery and have motivated three major exhibitions, which established El Greco as a "quintessentially Greek" artist despite the concurrent "global turn" of the international art world after 1989 (239-259).

With its critical historical, epistemological, and (trans-)culturally informed perspectives the book's four related sections suggest that museology is indeed about to move beyond the global. Its publication also demonstrates the surge of interest and changes in cross-disciplinary scholarship on museology of the last two decades. It is a timely up-date of earlier anthologies, which critically addressed the "idea" of the museum by describing it as particular ways of "grasping the world". [4] However, it moves the focus to the "image" of the museum underlining contemporary sensibilities towards representation in the digital age with in-depth analysis of manifold and -sited past and present connections to "gaze and discourse" that (in-)form the institution. The book is a must read for museum scholars, curators, other professionals as well as students in the field and also recommended for a broader interested audience.