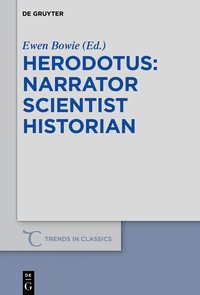 This new edited volume aims to explore further the qualities of Herodotus' narrative style, as well as his intellectual connections with a wide range of other thinkers and genres, topics that have already been well explored in recent Herodotean studies. The chapters are arranged according to the three thematic categories that appear in the subtitle of the book: 'narrator', 'scientist', 'historian'.

The first section, 'Narrator' (regrettably, there is no general introduction to the volume), contains five papers that explore various aspects of Herodotus' narrative methods. In 'Ὁμηρικώτατος? Battle narratives in Herodotus', John Marincola investigates the influence of Homer on Herodotus' battle narratives, arguing that although there are obvious differences between the Histories and Homer, there are nonetheless some striking ways in which Homeric battle narratives are adapted by Herodotus, not least in the presence of the divine (explicit and pervasive in the case of the Iliad, more subtle but no less recurrent in Herodotus' accounts of, inter alia, Marathon, Salamis, Plataea).

In the next chapter, Angus Bowie examines the storytelling techniques in three passages from the Histories, namely the opening logos on Gyges and his acquisition of the Lydian throne (1.8-13), Polycrates' failed attempt to dispose of his ring (3.40-3), and Herodotus' account on Cambyses' decision to invade Egypt (3.1). Herodotus makes repeated use of direct speech in these accounts, as he does a whole suite of 'very simple devices' (36), such as repetition of language, punning, and the elaboration of a nexus of ideas.

In 'Justifying violence in Herodotus' Histories 3.38', Scarlett Kingsley offers a fresh assessment of Herodotus' citation of Pindar in his famous excursus on Darius' inquiry into the funerary customs of the Indians and Callatians. Kingsley analyses closely the context of the Pindaric hypotext, which comes replete with themes of justified force and overweening authority, and shows how Herodotus thoughtfully weaves this Pindaric allusion more broadly into a logos that is pregnant with allusions to nomos and primarily concerned with the actions of (Persian) monarchs. The implications of this are clearly articulated by Kingsley, who argues that Herodotus' interaction with melic poetry is 'thoughtful and creative' (39) - a view that coheres with several other contributions in this volume, which also emphasise Herodotus' sophisticated approach towards literary, and specially poetic, sources.

Next, Patrick Finglass explores the mythic figure of the lame man as presented in Herodotus' Periander and Sophocles' Oedipus the King, two leading royal figures who issue a proclamation in the hope of cutting off an offender from interacting with others. As much as there are close ties between these figures in their Herodotean and Sophoclean narratives, Finglass emphasises the formal differences in their respective proclamations, for instance pointing out that while Pariander makes a series of attacks on the liberty of his son Lykophron, Oedipus is altogether a more mild ruler, concerned with discovering Laius' killer and fulfilling the wishes of Apollo. Finglass closes the discussion by considering the probable composition/publication dates of Herodotus' and Sophocles' works, and he remarks circumspectly on Herodotus' potential awareness of Sophocles' Oedipus.

In what is one of the most rewarding, although densely argued, chapters of the book, Ioannis Konstantakos explores the story (or in Konstantakos' parlance, 'novella') of Pharaoh Mycerinus (2.129-134). Konstantakos demonstrates clearly the Egyptian traditions and legendary materials that lie behind this memorable passage. The chapter closes, however, with a fine, extended discussion on Herodotus' remarkable arsenal of tools that he deploys in order to relay the tale of Mycerinus. While Konstantakos' observations on Herodotus' masterful control of his narrative will not surprise many readers, the author's specific comments on Herodotus' tendency to invest stories 'with a rich substratum of layer upon layer of narrative meaning' (107) powerfully capture the multiple tensions, ironies, paradoxes and inconsistencies that often remain unresolved in the Histories. Herodotus' interaction with Egyptian traditions continues in the next chapter, in which Gregory Nagy explores the claim that the third of three pyramids at Giza was built by a woman (2.124-34). Nagy goes on to contextualise this passage against other Greek accounts on the constriction of the pyramid by an Egyptian courtesan or queen.

In the first chapter of the second section, 'Narrator', Vasiliki Zali examines the relationship between myth and geography in the Libyan logos in Book Four of the Histories. Zali examines how geography and the study of different cultures is integral to this part of Herodotus' narrative, and she also shows how myth is integral to his geographic accounts. The brief conclusion brings out well the polemical quality of Herodotus' work, which is critical towards the earlier geographical treatises of, amongst others, Hecataeus and Anaximander of Miletus. Complementing this is the succeeding chapter by Reinhold Bichler, 'Herodotus the geographer', which investigates some aspects of the Histories that align the work closely with the basic meaning of the term 'geography'. Thus, Bichler examines Herodotus' approach to catalogues, maps, the distances covered in expeditions and the boundaries/dimensions of the continents. The chapter unfortunately ends rather abruptly, and offers no conclusive discussion on the ramifications of Herodotus' widespread interest in geographical matters.

In another of the book's most compelling chapters, Nikolay Grinster explores Herodotus' status as a literary critic. Having established the wider tendency to offer a critique of (particularly poetic) texts in fifth-century BCE sophistic culture, Grinster explores Herodotus' own contribution to such proto-philological debates, specifically in his well-known tour-de-force study concerning Homer's knowledge of Helen's true whereabouts in the Trojan War (2.112-120), along with his oft-repeated quotation of Pindar at 3.38. Although readers might have wished to see scrutiny of more examples, e.g., Herodotus' reference to Phrynichus' Miletou Halosis at 6.21.2, Grinster illustrates convincingly how not just 'sophists' like Protagoras or philosophers like Democritus, but also historians like Herodotus contributed meaningfully to the tradition of literary criticism commentary, which flourished during the hellenistic period. His is thus a Herodotus not to be seen narrowly in the field of historiography, but an author situated amongst a broader group of thinkers, working in a diverse and fluid set of genres.

Paul Demont explores some of Herodotus' references to health and disease, showing how the Histories act as an important repository for ideas about medicine that predate (and sometimes dissent from) those found later in the Hippocratic corpus. The examples he looks at include the infections of Cambyses' and Miltiades' thighs (3.66.2 and 6.136.2 respectively) and the famously ghoulish death of Pheretime, whose demise is explicitly linked to the divine by Herodotus (4.205). While this chapter offers a number of useful comparisons between Herodotus and the Hippocratic corpus, it would have been interesting to see further reflection on Herodotus' purposefully un-Hippocratic approach to certain aspects of medicine and disease.

The final section, 'Historian', opens with a chapter by Christopher Pelling, in which he seeks to deepen our understanding of Herodotus' affinities with the Hippocratic corpus by exploring his language of causation and just how far Herodotus reduces the messiness of multiple causes into a coherent schema of explanation. The discussion ultimately highlights the complexity of Herodotus' approach towards explanation, which shares patterns that are discernible in the Hippocratic texts, not least in the way that the Histories trains readers from the beginning to be prepared for 'explicability without predictability' (222). Next, Smaro Nikolaidou-Arabatzi analyses Herodotus' use of scientific terms, showing how the lexically rich θωμάζειν and its cognates appear far more frequently than does ἱςτορέειν and its various forms, and how θωμάζειν contributes to the meaning of the term ἱςτορεῖν/ἱςτορία ('inquiry').

The penultimate chapter looks at the interaction between objects and Herodotus' literary agenda in Book One's Lydian logos. Here, Maria Xanthou suggests that Herodotus' attitude towards objects complies with his broader investigative method of conducting multi-pronged inquiries, so as to ensure that great achievements do not become obscure, erased by time. Finally, in 'Truth and authority in Herodotus' narrative', Rosalind Thomas considers the different approaches to the foundation of Cyrene in Pindar Pythian 4 and Herodotus, and the Battle of Plataea in Simonides' and Herodotus' versions of that event. Thomas makes some welcome closing remarks on Herodotus' general tendency to offer (sometimes silent, sometimes open) corrections of rationalised versions of existing traditions.

In sum, this volume has been generally well edited, although an unevenly distributed range of minor typographic errors remain. It offers a number of useful contributions by leading experts on Herodotus' intellectual context and narrative methods. Furthermore, it offers fresh perspectives on Herodotus' construction of a unique narrative, and will hopefully encourage further research on the relationship between Herodotus and the wider intellectual currents of his day.