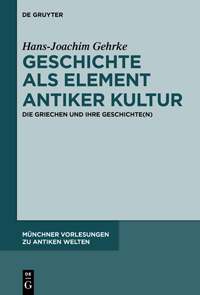 In this concise but stimulating book on history and Greek culture, Hans-Joachim Gehrke continues to refine his work on intentionale Geschichte, which he defines as "a history in the self-understanding of social groups and communities - connected to a corresponding understanding of the other - which is important, even essential for the collective identity, social cohesion, political behaviour and the cultural orientation of such units" (37). In a series of four chapters, Gehrke illustrates how Greeks' histories were consciously employed to help shape political and social realities. Each chapter aims to build a much more nuanced understanding of the relationship between conceptions of history and political organisation in ancient Greece, demonstrating how social self-affirmation was central in this relationship.

Chapter one explores the reference groups, producers and media of intentional history. Greek poetic and historical texts were written in the first person plural, "we", with the effect that a collective audience, typically receiving these texts in an oral format, would be able to identify with and share an understanding about the events and people described. This phenomenon derived from the Archaic epic poetry of Homer and Hesiod, and had a substantive influence on a range of later authors, from Hecataeus of Miletus to Sophocles. The poets were after all "kissed by the Muses" (14), and as such, guarantors of truth; in this context, it should not surprise us that poets were called upon in a variety of contexts, e.g. an international dispute between Priene and Samos (16). This chapter offer some fruitful discussion both on the constant tension and interaction between Geschichten and Gechischte (stories vs. history) in Greek culture (originating at least as far back as the aioidoi and rhapsodes of the epic songs), as well as the complex connections between past, present and future in intentional histories, which sought to confer glory/preserve memory - both positive and negative!

Another characteristic of Greek notions of the past that Gehrke illustrates here is the role that wider communities played in the formation and dissemination of intentional histories, e.g. in ritualised events such as tragic performances, choral songs, and dancing. Many of these performances were made up of the wider community and, by extension, were directly connected to the political system of that community.

Chapter two examines the motives, forms and structures of the ideas of the past. Gehrke acknowledges the multiplicity of meanings generated by the term myth - myths playing a central role in the intentional histories of the Greeks - and the difficulty of homing in on an all-encompassing definition. The interaction between myth and history, or mythistory, is a fundamental element of Greek society and Greeks' formation of identity. As such, the Trojan War plays a central role in the mythistorical stories of early Greece. Other narratives too, e.g. the Dorian and Ionian migrations (stories that deal with fundamental themes: conquest and colonisation), are crucial in the formation of group self-understanding, as reflected already in the works of early poets, such as Tyrtaeus and Mimnermus.

In this way, Gehrke illustrates how the Aetolians were able to forge an identity that was ultimately traced back to the mythical mortal Endymion, consort of Selene. Such appeals not only helped to trace individual and shared community identities, but also served to bolster the prestige and ancestry of individual groups. Plausible reconstructions of the past played a vital role as part of this construction of group identity, though mythic motifs and imagination too played a role. As Gehrke observes in relation to the Ionians' cult worship of Poseidon Helikonios, such appeals were central to the forging of commonality and community and should not be reduced to "l'art pour l'art" (62).

Chapter three examines the impact of intentional history on early historiography, and explores the significant interactions between early historians and epideictic oratory. As part of this chapter, Gehrke traces the earliest phases of historiographical discourse, paying particular attention to early mythographers and genealogists, as well as the Ionian philosophers of the sixth-century. It is these Ionian philosophers and conductors of historiē (e.g. Xenophanes of Colophon, Hecataeus of Miletus) who were the first to challenge radically conventional Greek concerns about the past and to improve on the Greeks' intentional history of the past. These thinkers attempted to discern truth from fiction, seeking correspondence and agreement between facts and empirical evidence, ultimately leading to a division between philosophy (logic and metaphysics) and historiography.

Gehrke demonstrates how Herodotus and other early historians used various techniques/methods that derived from early intentional histories, e.g. the focus on autopsy or opsis (calling to mind Od. 8.487-91). This further reinforces the broader point that early historiography alternates between the contemporary, critical-rational method of writers such as Xenophanes and the structures, motives and forms of traditional intentional history.

Chapter four continues to look at discourses on the slipperiness and pluralities of truth in rhetorical works such as Gorgias' Encomium of Helen and Dissoi Logoi-works that demonstrably served to shape the techniques and methodologies of fourth century historiography. Gehrke explores the enduring tension between Dichtung und Wahrheit in rhetorical speeches, such as those of Isocrates, and the impact that this has on historiographical authors, notably Theopompus. For Theopompus was interested in political-didactic questions, pursuing a rhetorical agenda that would lead to sound educative and political instruction (e.g. the centrality of panhellenic freedom). Yet simultaneously he applied strict criteria of truth in order to test the evidence (and here recurs the Herodotean/Thucydidean emphasis on eyewitnesses). As the discussion on early historiography in chapter 3 already demonstrated, the focus on both moral and rational concerns is central to the shape of Greek historiography.

This monograph offers a rich, ecumenical reading of Geshichte(n) and/in ancient Greek culture. Each step of the analysis consistently demonstrates the deep-seated interconnections between early poetic traditions and later historiographical, epideictic and rhetorical traditions, down to the time of Polybius in the Hellenistic period. Gehrke amply demonstrates how many of the forms, structures and motives of the earliest intentional histories profoundly influenced and shaped historiographical praxis. Such interaction might well perturb modern readers who would wish to position early epic texts firmly within a spatium mythicum, but the nuances of intentional history ultimately militate against dogmatic and crude (pseudo-)polarities such as fact/fiction, myth/history. Geschichte als Element antiker Kultur thus illustrates the efficacy of intentional history as a heuristic device, uncovering a more sophisticated picture of Greek historiography, its intellectual foundations, and its wider social-political contexts.