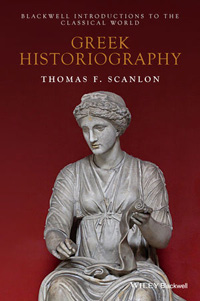 In this new survey on Greek historiography, Thomas Scanlon provides a useful overview of Greek history writing from its pre-Herodotean origins to the Roman imperial era (c. AD 240). The book is aimed at a diverse audience (students, general readers, more advanced students and scholars, vi), and moves chronologically, surveying a wide range of well-preserved and highly fragmentary authors. The book explores the (often limited) biographies of individual historians, analyses the content of their histories, and teases out major themes that span across the genre, such as the Greek historians' interest in leadership. Above all, however, Scanlon pays special attention to the themes of 'power' and 'human nature', concepts that he demonstrates to be paramount in much Greek historical literature. The book is many ways a useful guide for those who are new to the study of historical writing in Greek and Roman antiquity, although I will have more to say below about some of the book's weaknesses.

The introduction contextualises the origins of Greek historiography fairly well, but the discussion is much too concise at times. For instance, Scanlon introduces the reader to lyric poets such as Mimnermus and Tyrtaeus in order to show how their works were concerned with the polis and civic life; yet it is quite a leap of faith to suggest that 'monody prefigured and perhaps forestalled the invention of history' (12). His closing comments on the logographers ('story writers') are more welcome, however, highlighting the plurality of early inquiring figures (notably Hecataeus of Miletus) - many of whose works have been either lost or remain in only a fragmentary state.

The next three chapters, which form almost half of the book, cover the three surviving classical Greek historians: Herodotus, Thucydides and Xenophon. The analyses of each are measured; Scanlon offers a number of indicative remarks in particular about the irreducibility of Thucydidean passages on, e.g., the Melian Dialogue (106-7), which offer complex presentations on political and ethical questions without straightforward moralising. The section on Xenophon well introduces the reader to an author responsible for a variety of writings (Scanlon focuses here on the Anabasis and the Hellenica), and offers some good discussion on Xenophon's interest in leadership and traditional piety, albeit Scanlon's views on Xenophon's less complex and unoriginal narrative style (126, 135) are unnecessarily reductive. One might also question Scanlon's fairly conventional approach to Thucydides' relationship with his 'predecessor' Herodotus; a number of recent publications have explored the relationship between these two writers in rather more nuanced terms (see especially Edith Foster and Donald Lateiner <2012>, Thucydides and Herodotus, Oxford: OUP).

The remaining chapters of the volume assess the continuation of the genre in later periods. (Scanlon traces four distinct stages in the development of Greek historiography: the foundational works of Herodotus and Thucydides; the philosophical / rhetorical shift of the fourth century; the universal histories of the hellenistic era; and the Rome-centric works that begin with Polybius and Fabius Pictor, 276.) While Scanlon traces change, he nonetheless proposes a great deal of continuity over time, emphasising the importance of the themes of 'power' and 'human nature' for authors as diverse as Ephorus and Duris of Samos, and Josephus and Herodian, while noting too a 'consistent reverence for [...] classical predecessors' (290). This runs the risk of oversimplifying a much messier picture. The Cnidian doctor Ctesias (summarily referred to at 177), famously lambasted Herodotus for fabricating his stories (FGrHist 688 T8), while Polybius systematically attacked his predecessor Timaeus of Tauromenium in book 12 of his Histories. The varied reception of earlier authors in later historical works suggests a more varied, less linear picture than the one promoted by Scanlon.

It is to be expected that a book such as this should provide particularly detailed examinations of Herodotus, Thucydides, Xenophon and Polybius - authors whose works have survived (though a large section of Polybius' Histories is of course lost) and have long been the subject of significant scholarly debate. Nevertheless, it remains a surprise to see that Thucydides takes up by far the longest chapter of the book. Some might interpret this as a reflection of Thucydides' high reputation amongst ancient historians past and present; nonetheless, one might have expected a slightly fuller treatment of Herodotus, given his reputation (justified or not) as the 'father of history' in antiquity. Indeed, Scanlon's marked interest in Thucydides is clear from the outset; the author admits in his preface that as a student he was 'entranced' by Thucydides' 'stark descriptions of power politics' (viii).

One of the strengths of Greek Historiography is the author's inclusion of a wide range of lesser-known writers; there is some meaningful discussion on a whole suite of fragmentary authors like Fabius Pictor and Theopompus. And even more oblique figures get a mention, e.g. Philistus of Syracuse, Posidonius, etc. This is very pleasing to see in an introductory volume on the subject of Greek history writing. As such, Scanlon succeeds both in offering the student reader a clear sense of the scope of the genre, and in making obscure authors more accessible.

One of the greater disappointments of this book is the author's decision primarily to cite English scholarship, and his decision not to include a number of important recent works in both the individual chapter bibliographies, and the 'Further Reading' section. For example, Scanlon makes no reference to Jonas Grethlein's 2010 monograph The Greeks and their Past, or indeed to the same writer's 2013 book Experience and Teleology in Ancient Historiography, both of which have much to say about the finer workings of the Greek historians' texts, as well as the cultural and intellectual contexts of early Greek historiography. Missing too is Emily Baragwaneth's important 2008 book Motivation and Narrative in Herodotus, which has much to say on that's author's narratorial persona. Moreover, the opening chapter on the prehistory of Greek historical literature makes a number of sensible remarks on shadowy figures like Acusilaus of Argos and Charon of Lampascus; a vital starting point, however, for this complex area of investigation is Robert Fowler's 1996 Journal of Hellenic Studies article, 'Herodotus and his Contemporaries'.

It is not the duty of a reviewer, I think, to dwell on careless typos, obscure expressions or obfuscations, but indeed such issues do abound in this volume. Many of these are minor (e.g. the reference to Herodotus' Helen logos on should read 2. 112-20 <32>; the Battle of Mantinea was fought in 362 BC, not 367 <168>), but others are more substantial (e.g. Scanlon erroneously refers to Cyrus attempting to 'reestablish royal power' in the Anabasis <281>). One would certainly hope that such errors were corrected in any future edition of the volume.

In spite of these shortcomings, Greek Historiography is a pleasing contribution to the study of the Greek historians, offering undergraduate and graduate readers a cogent analysis of a rich, dynamic genre that covers some 700 years. Scanlon succeeds at conveying the quality of individual historians' prose discourses, for instance, Xenophon's clear Attic prose versus Thucydides' much more dense narrative. And perhaps the book's greatest success is its convincing illustration of the breadth and variety of historical works written in ancient Greek, something not always evident in introductory accounts of Greek historiography.