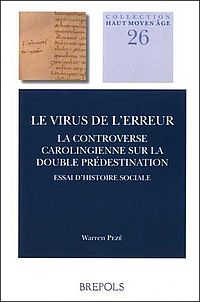 Gottschalk of Orbais, son of a Saxon count, oblate at Fulda, pupil of Hrabanus Maurus, wandering preacher, brilliant intellectual, unrepentant supporter of the doctrine of double predestination was the last and undeniably the most significant Carolingian heretic. He has been the object of often passionate investigation since the seventeenth century and he continues to retain the attention of scholars, as proved by the almost simultaneous publication of Warren Pezé's and Matthew Gillis' books. [1] While Gillis' Heresy and Dissent takes a decidedly political and intellectual approach and focuses on the clash between Gottschalk and the Carolingian establishment, Pezé's monograph offers a larger picture of a society in which kings, church leaders and intellectuals were not the only ones participating in theological debates. As the reader goes through the pages of Le virus de l'erreur, Gottschalk himself moves slowly to the background of a wider world in which his ideas were enthusiastically embraced, carefully weighted or relentlessly opposed by learned and less learned readers. Pezé's philological and manuscript-based approach to the controversy represents the most distinctive feature of his research. However, it is this same approach that may limit the potential audience of this book to scholars who are already familiar with Augustinian theology, Carolingian cultures of debate and manuscript studies.

The monograph is a condensed version of a much longer dissertation defended in 2014: traces of the traditional, yet at times redundant, structure of a French doctoral thesis are still apparent in the articulation of the book, but they never result in unnecessary repetitions. On the contrary, the introductory and concluding remarks of each chapter effectively highlight the major points of the argument and the lessons that the reader should retain. A clear introduction (17-41) provides the coordinates within which the history of the double predestination controversy should be situated and understood: these are the thorny issues left open by the Augustinian theology of free will and divine grace, the biased legacy of modern confessional historiography, the new interpretative models applied to the study of the controversy and the features of the available sources. The first chapter (43-97) is also introductory and offers a valuable chronology and summary of the major moments that marked Gottschalk's life, from his oblation to Fulda in the early decades of the ninth century to his death (late 860s) and the last references to the controversy in the late writings of his nemesis, Archbishop Hincmar of Rheims.

The book is then split into two halves: the first focuses on the men who were personally involved in the events that shaped Gottschalk's life and influenced the unfolding of the controversy. Chapter 2 (101-177) is an analysis of the kinship networks that Gottschalk inherited and exploited as well as of the intellectual bonds he created and nourished in the first half of his adult life: a long prosopographic analysis of his Saxon (paternal) and Frankish (maternal) kinship brings to light family conflicts, uncovers the possible motives that led to Gottschalk's oblation and explains his successive pleas to be relieved from his monastic vows. The analysis unveils Pezé's confidence in a somewhat social deterministic model in which networks draw the insurmountable boundaries of individual action, an assumption that not every reader will share. [2] Chapter 3 (179-214) focuses on the court of Charles the Bald, its distinctive culture and the entourage of courtiers who had a bearing on the king's understanding of and reaction to Gottschalk's ideas: John Scottus Eriugena unsurprisingly emerges as the leading intellectual, but the influence exerted by the clerics who daily had the king's ear ultimately shaped Charles the Bald's position against the doctrine of double predestination. Chapter 4 (215-299) first analyses the reconfiguration of networks and factions in relation to the controversy and, then, zooms in on the strategies put to work by the major opponents of Gottschalk's doctrine to prevent, discourage and undermine the dissemination of his ideas, especially among the lay elites.

With the second half of the book we move into its more technical part consisting of a thorough investigation of the sources pertaining to the controversy: Pezé's philological, palaeographical and codicological approach to the texts, the paratexts and the manuscripts allows him to extract more information than previously has been done and undoubtedly represents the most innovative and fruitful section of his study. Chapter 5 (303-367) explores the communication strategies deployed by Gottschalk and his adversaries and assesses their role in shaping two distinct and opposite audiences: the docti and the simplices. The participation of ordinary clerics and monks emerges as a distinctive feature of the double predestination controversy, while the institutional attempts at controlling critical theological knowledge and the spread of heretical ideas are shown to have failed, largely because of the very efforts of the main actors in the debate, who, in seeking to persuade and rally the largest audience possible, contributed to the prolonged discussion and wider dissemination of Gottschalk's teachings. Chapter 6 (369-427) explores the ways in which the authors involved in the controversy manipulated their sources and the instances in which accusations of falsification were directed towards an opponent in order to undermine his position. The ensuing examination of the Carolingian manuscripts transmitting Augustine's Enchiridion and Isidore of Seville's Sententiae shows the varying degrees of comprehension of the debate among clerical and monastic circles. The last chapter (429-483) is dedicated to manuscripts and particularly to paratexts (reading marks, marginal annotations, etc.) revealing reactions to the controversy in different regions of the Carolingian empire: the survey of Pacificus of Verona's personal codices, the library of Würzburg Cathedral and the so-called glossae hibernicae brings to light the networks through which information about the controversy travelled. The methodology of the authors involved in the debate is also explored through the analysis of the compilatory nature of their treatises, the writing of which inevitably involved larger groups of individuals (scribes, collaborators, readers). A short conclusion (485-492) sums up the main results of this study and explicitly claims a place for the double predestination controversy in the history of medieval heresy, a plea that Pezé's well-researched and compelling arguments will make difficult to ignore in the future. A series of annexes (translations, short texts, tables and pictures of manuscripts) followed by the bibliography and three indices (places, manuscripts, names) closes the book.

Le virus de l'erreur is the result of extensive and ambitious research. It sheds new light not only on the double predestination controversy, but more generally on Carolingian cultures of debate and the social world in which early medieval intellectuals existed and operated. Specialists of Carolingian culture as well as historians of medieval heresies will benefit greatly from Pezé's work: his meticulous analysis of textual dossiers and manuscripts shows the advantages of both a philological and a codicological approach to the sources, while socio-anthropological interpretative models allow him to take into account the social mechanisms and the intellectual practices regulating the world of the Carolingian elites. A reader unacquainted with the period and the major issues at stake in the controversy will at times feel lost in the mass of information and references mobilised by Pezé, who, despite his clear and beautiful prose, demands much from his audience in terms of unwavering attention and a considerable amount of prior knowledge of highly technical and difficult topics. This reader was at times confused by the definition of the simplices as the ordinary clergy, both clerical and monastic: the use of the two categories (clercs, moines) almost as synonyms (e.g. at 338-339) blurs distinctions between the target audience of specific texts such as Hincmar's treatises. Sections of the book that are not crucial to its main arguments could have been shortened: this is the case of the lengthy prosopographic analysis in Chapter 2 as well as of the survey of late antique and early Carolingian heresiological topoi in Chapter 6. As to the editorial choices, the use of an abbreviated reference system paired with a selected bibliography makes it difficult to find full references to books and articles, which are given only in the first footnote in which they are mentioned. But these are trivial flaws that do not undermine the overall excellent quality of Le virus de l'erreur and its crucial contribution to our understanding of Carolingian communities of learning and textual communities. Never overwhelmed by the charisma and intellectual stature of the main actors in the double predestination controversy, Warren Pezé gifts us with a fascinating fresco of a world in which kings, scholars and church leaders did not operate in isolation, but were surrounded by individuals, groups and communities who also had their say in the most heated debate of their time and whose voices can still be heard.

[1] Matthew Bryan Gillis: Heresy and Dissent in the Carolingian Empire: the case of Gottschalk of Orbais, Oxford 2017.