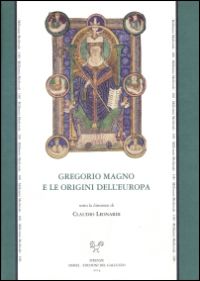 The international conference Gregorio Magno e le origini dell'Europa was held in Florence in 2006 to mark the official closure of activities of the Italian National Committee appointed to celebrate the 14th centenary of the death of Gregory the Great (died 604). The proceedings, edited by the late Claudio Leonardi, collect 35 articles from the 42 papers that were presented at the conference. Three indices (manuscripts and early modern books; names and subjects; modern scholars) close the volume providing an appreciated aid to guide the reader throughout the over 700 pages of the book.

The task of introducing the figure of Pope Gregory I (590-604) is undertaken by Sofia Boesch Gajano (3-20). She reviews Gregory's familiar and social identity, his education and values, his secular and ecclesiastical career. Among the pope's writings, the stress is put on the collection of letters (the Registrum) to be considered a true opera d'autore (16) meant to entrust Gregory's legacy to posterity.

The section dedicated to Gregory and the Ancient World opens with Carole Straw's essay on compassion as a new idea at the centre of Gregory's moral theology (23-62). Salvatore Pricoco then tackles the problem of the influence of earlier monastic traditions (63-88), arguing that a monolithic understanding of monasticism can not be retraced in the pope's writings. Manlio Simonetti (89-99) and the late Emanuela Prinzivalli (101-112) stress the surprising lack of depth and imprecisions in Gregory's theological and doctrinal arguments, which are to be connected to the progressive cultural marginalisation of the Western territories of the Roman Empire. Walter Brandmüller focuses on the role of councils and synods in the management of ecclesiastical affairs (113-130): he highlights their distinct competences as well as their hierarchy with provincial assemblies at the bottom and the ecumenical sanctissimae synodi at the top.

The second section deals with Gregory and his World. The first article by Ambrogio Piazzoni discusses Gregory's understanding of the papal office through the analysis of key expressions such as rector, praedicator, consul Dei and servus servorum Dei (133-142). Georg Jenal's essay focuses on Gregory's dealing with ascetical issues (143-158) and argues that as the pope never implemented a systematic Klosterpolitik he can not be seen as a Mönchspapst. The late Adalbert de Vogüé explains Gregory's ideas about monastic life and underlines his more positive appraisal of coenobitism over eremitism (159-169). Walter Pohl then provides an analysis of the image and role of the barbari in the pope's writings (171-180) reviewing their stereotypical literary, moral and rhetoric representations as well as Gregory's more nuanced and pragmatic attitude as shown in his political and diplomatic relations, primarily in the Registrum. The following article by Claudio Azzara examines how Gregory dealt with the war opposing Lombard and imperial armies in the Italian peninsula (181-190). His letters show that case-by-case solutions were envisaged to cope with different situations of conflict, while the homilies and exegetical commentaries put war in an eschatological dimension. Luce Pietri analyses the pope's diplomatic relations with the Frankish kingdom (191-204): Gregory accorded it a higher legitimacy compared to all other regna, while at the same time striving to win royal support for the reform of the Frankish church and for his Anglo-Saxon mission. The essay by Guglielmo Cavallo gauges the growing distance between the Latin West and the Greek East in the light of Gregory's writings (205-218). In possession of an elementary and fragmentary knowledge of Greek and Eastern patristic literature, Gregory never doubted the superiority of the Latin language, an idea that had its roots in the latent but increasing anthropological distance between Greeks and Latins.

The third section, Gregory: his Works and Thought begins with a study by Francesco Santi on the XL Homiliae in Evangelia (221-236), in which the Roman pope drew a thick line between the transience of power of earthly potestates and the immanence of the auctoritas of the Church represented by its bishops. Giuseppe Cremascoli concentrates on the analysis of the De miraculis patrum Italicorum (237-245), known to us as Dialogi, which he considers the masterwork of Gregory's pastoral genius. Elena Cavalcanti then focuses on the Moralia in Job (247-258) and show to what extent Gregory relied on Origenian tradition while drawing a spiritual path to God. The reception of Roman juridical tradition is at the core of Lisania Giordano's article (259-268): four letters dealing with a Spanish episcopal affair shed light on Gregory's use of Justinian's Codex and his equation of Roman law (lex fori) and Church decrees (lex Dei). Bruno Judic's article redraws the portrait of Gregory's ideal bishop (269-290): he was shaped in the image of biblical prophets and was first and foremost a preacher and a shepherd, a figure for which a recent historical model was found in Gregory's predecessor, Pope Pelagius II. Paolo Chiesa focuses on the key manuscript Troyes 504, copied in Rome during Gregory's rule (291-306). Through the analysis of biblical quotations, the examination of this meticulously and systematically corrected copy of the Regula Pastoralis unveils the making of a work-in-progress under the supervision, or with the authorisation, of the author. Cristina Ricci then discusses prophetic and eschatological aspects in Gregory's writings (307-326). While the laments for a mundus senescens and for Rome olim mundi domina do not find correspondence in the Church's momentum, the task to unveil God's plan in history is entrusted to bishops, whose prophetic voice is anchored on the attentive reading of past and present events. Pierluigi Licciardello retraces Gregory's ideas on sanctity through his exegesis and the Dialogi (327-352). Grasping a principle of unity in the diverse manifestations of the divine, the pontiff shaped an innovative model that was nonetheless destined to be overlooked by later medieval traditions.

The last part on Gregory and his Fortune opens with a reassessment of the pontiff's place in medieval libraries through the analysis of book catalogues undertaken by Anne-Marie Turcan-Verkerk (355-397). The overview of book collections pre-dating the 13th century shows the ubiquitous presence of Gregory, whose success was specially connected to Benedictine communities, and, more prominently, to 11th-century reformed houses. Fabrizio Martello focuses on the exegetical florilegium known as the Liber testimoniorum attributed to the papal notary Paterius (397-423). This coherent collection of Gregorian excerpts, shaped after scholia and biblical catenae, turned into a new authorial work destined for lasting independent success. The poetic rewriting of the Dialogi compiled in 13th-century Jumièges is the subject of Mauro Donnini's article (425-434). Vocabulary, literary devices, strategies of abbreviation and additions are analysed to disclose the compiler's effort to perpetuate the old monastic ideals threatened by new spiritual models. Antonella Degl'Innocenti offers an overview of Gregory's biographies (435-448) from the Whitby Life (early 7th c.) to John the Deacon's Roman Life (late 9th c.). Conrad Leyser focuses on the Interpolator's Vita Gregorii (449-462), dismissing the traditional dating of the text (Rome, c. 900) he re-locates the writing to Fleury in the 820s. Giovanni Paolo Maggioni draws attention to the transmission of Gregory's hagiography and the reception of his auctoritas in 13th-century Dominican legendaries (463-482), namely those compiled by Bartholomew of Trento, Jean de Mailly and Jacobus de Varagine. The following essay by Rossana Barcellona focuses on the reception of the Dialogi in Sicily (483-502): her first case study deals with the Montecassino hagiography (11th-12th c.) of one of St Benedict's disciples turned into a Sicilian martyr, while a second is dedicated to the vernacular translation of the Dialogi prepared at the 14th-century Aragon court. Francesca Sara d'Imperio sheds new light on the reception of Gregory in Alcuin of York's letters and exegetical works (503-522) and shows the role played by florilegia and commentaries as intermediaries in the transmission of the pontiff's difficult exegesis. Gregory's place in Bernard of Clairvaux's production is studied by Francesco Vermigli (523-550): authoritative exegetical source and promoter of a monastic life centred on contemplation, Gregory mirrored Bernard's own convictions. Yet, the comparison between the Regula Pastoralis and the De consideratione ad Eugenium shows two rather different solutions for the balance of action and contemplation. The reception of the Registrum in early medieval canonical collections is at the core of Herbert Schneider's article (551-576): starting with the Collectio Vetus Gallica (early 7th c.) and closing with the Collectio Anselmo Dedicata (late 9th c.), the scholar retraces the progressive integration of Gregory's epistles - often as appendix or ad-hoc additions - and highlights the absence of a systematic use of the letters before the late 9th century. How and to what extent humanists knew and studied Gregory is the subject of Mariarosa Cortesi's essay (577-600): the pope's pivotal place is revealed through a review of the book collections that belonged to learned scholars the likes of Petrarca, Lorenzo Valla, Nicholas of Cusa and Coluccio Salutati. Giuseppe Antonio Guazzelli stretches the chronological line up to the 16th century and retraces Gregory's Fortleben in Protestant and Catholic scholarship (601-618). Although always considered an auctoritas, Gregory did not receive a uniform treatment and it was in the context of Protestant and Catholic reformations that the first critical examination of his works was carried out. The iconography of Gregory the Great is the topic of the last two articles by the late Fabio Bisogni (619-634) and Viviana Cerutti (635-662) both featuring two black and white sets of images: the first essay focuses on the pontiff's portraits in medieval frescoes, ivories and illuminated manuscripts, while the second deals with devotional images illustrating key episodes extrapolated from Gregory's Lives.

The essays gathered in this volume offer a thorough reassessment of Gregory's place and legacy in European medieval and early modern culture and memory. Along with Brill's Companion to Gregory the Great, [1] the book is both a valuable compendium of the current state of the art and a starting point for further research. For the sake of completeness, the book could have benefited from both an additional article on the reception of classical Roman culture and an essay dedicated to the pope's careful management of economic resources and civil administration in Rome and in the Italian peninsula. All in all, these undoubtedly are venial sins. Alert witness to an ever-changing political, social and cultural world, Gregory the Great came to be considered a cornerstone of the European Middle Ages, a role that is efficaciously and closely illustrated in this rich collection of studies.