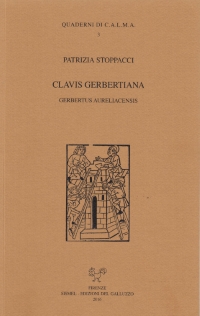 Monk, teacher, abbot, archbishop and pope: Gerbert of Aurillac undoubtedly is one of the most fascinating figures of post-Carolingian Europe. Le pape de l'an mil, whom Pierre Riché studied in a ground-breaking work, was an eclectic man and a true polymath: [1] oblate to a Cluniac monastery in Aquitaine, he climbed the ecclesiastical hierarchy thanks to his wide-ranging learning and was elected pope Sylvester II in 999. The Clavis Gerbertiana prepared by the Italian philologist Patrizia Stoppacci offers a complete overview of Gerbert's intellectual output and succeeds in distilling it into a sleek and accessible book (248 pages). This was not an easy task: the historical man, the author and his works have been the object of countless studies and the presentation of his oeuvre could easily have resulted in a bulky encyclopedia gerbertiana that only few determined scholars would have read from cover to cover.

The actual Clavis constitutes the core of the book (55-147) and is organised in three main chapters. The first one presents the texts written by Gerbert or attributed to him (opera authentica et dubia) and covers the products of his administrative and pastoral duties as archbishop and pope (council proceedings, papal decrees), his didactic tractates and commentaries and, finally, his personal - both official and informal - correspondence (220 letters), verse composition (carmina, epitaphs, hymns, etc.) and speeches (conciliar orations). The inventory is preceded by the complete list of secondary literature which is regrettably not reader-friendly: the bibliography is presented in chronological order (from oldest to newest) in a single block of text in small font size which makes it impossible to detect a title of interest within such an indigestible whole. For each of Gerbert's works, the Clavis records the Latin title, the incipit and explicit, the manuscripts containing it, the different editions and studies and, finally, a brief description (in Latin). A progressive number is attributed to each text, with the exception of the 42 papal decrees and the 220 letters that are grouped together, but singled out individually by their incipit. It should be noted that in this section those writings that have not survived (opera deperdita) are also listed, such as his instructions on the use of the abacus, his handbook on rhetoric and his commentaries on dialectic. The second chapter of the Clavis is dedicated to those works (23 texts) that have circulated under the name of Gerbert (opera spuria), but are today considered to have been written by other authors: the complete list of manuscripts, editions and relevant studies is again provided for each one of them. The third section, and certainly the most original contribution, is dedicated to Gerbert's autographs, that is the manuscripts in which his hand has been identified: annotations, corrections, additions and diagrams handwritten by the learned churchman are presented by Stoppacci in sixteen separate units. A one-page appendix is finally dedicated to Gerbert's epitaph placed on his tomb in St John Lateran.

The long introductory essay (3-54) is dedicated to Gerbert's didactic activities at Rheims and focuses on his teaching of the trivium (grammar, rhetoric and dialectic). The predilection of the future Sylvester II for the scientific disciplines of the quadrivium (arithmetic, geometry, astronomy and music) has long held the attention of modern scholars, not only on account of the greater number of his works dedicated to them, but also because they contribute to the portrait of an extraordinary medieval scholar in many ways ahead of his time. Patrizia Stoppacci offers a more balanced assessment of Gerbert's teaching, taking into account the witnesses of his didactic programmes (mainly his pupil Richer of Rheims), the information contained in his personal letters and the study of those manuscripts that he might have consulted as well as those in which his hand has been identified. Gerbert's interest in the classics is thus brought to the fore together with his incessant quest for rare texts such as the Achilleis by Statius or Eugraphius's commentary on Terence. A complete overview of Gerbert's letters containing book requests (12-14) eloquently illustrates the eclectic interests of the scholar and the width of his intellectual network. The analysis of the classical quotations found within his correspondence (14-19) confirms the impressive range of Gerbert's reading: in the light of these literary references, a manuscript today in Wolfenbüttel (Herzog August Bibliothek, Cod. Guelf. 335 Gud. lat.) is considered by Stoppacci to have been one of the products of the school of Rheims when Gerbert taught there. An interesting section is dedicated to the autographa gerbertiana detailing all the interventions of the learned scholasticus detected in a group of codices showing his interest in rhetoric and history: the hand α identified in a manuscript copied for Gerbert by a monk of Aurillac (Erlangen, Universitätsbibliothek Erlangen-Nürnberg 380) is used as the reference to identify the other marginalia attributable to the tenth-century scholar. The libraries of Rheims and Bobbio frequented by Gerbert and his personal books later included in the library of Henry II are also briefly mentioned (27-32). Stoppacci then turns to the main focus of her introduction: Gerbert's teaching of rhetoric and dialectic at Rheims. The lost handbook De rhetorica, his letters and speeches are assessed through the comparison with Gerbert's classical models (Cicero, Seneca), while the analysis of his commentaries on dialectical works highlights his innovative didactic programmes focusing on Aristotelian logic. Particular attention is devoted to the treatise De rationali et ratione uti written around 997-998 and dedicated to Otto III: the discussion of the manuscript transmission offers an introduction to the new critical edition that constitutes the third section of the volume (149-193). This latter part undoubtedly represents Stoppacci's most original contribution. The description of each of the eight manuscripts transmitting the text, the discussion of the recensio codicum and the presentation of the stemma precede the edition, which is the first to be based upon the collation of all the surviving textual witnesses. The last pages of the book offer seven useful indexes identifying each work by its title, recording the incipit and explicit of Gerbert's writings, providing a repertory of his letters and the list of all the manuscripts, classical authors, works, names, places and institutions mentioned in the book.

This third volume of the series Quaderni di CALMA is more than a bibliographical introduction to a medieval author. It undoubtedly fulfils its purpose: to help both students and experienced readers to navigate the scholarly output of Gerbert of Aurillac and the secondary literature dedicated to him. The introductory chapter can be read as an autonomous article building on existing studies and focusing on manuscripts in order to restore a more comprehensive picture of the culture and learning of an extraordinary man. The edition of the De rationali et ratione uti is a welcomed bonus in this direction as it confirms the originality of Gerbert's teaching also with regard to the arts of the trivium. A short biographical introduction would have been desirable to ease the uninitiated reader into the subject, and a few samples of Gerbert's handwriting would have been a useful palaeographical appendix, especially in consideration of the lack of consensus on some instances in which his hand has been identified. The layout choice for the general bibliography remains the only true unsatisfactory feature of this volume. A reasonable price and the availability of the ebook on the publisher website commendably meet the needs of a graduate audience that will find in this volume a valuable preparatory tool for the study of any of Gerbert's works. Specialists will, on the other hand, appreciate Stoppacci's contribution to the scholarly debate surrounding Gerbert's teaching of the trivium, which admirably confirms and underlines the value of the recent trend of research that places manuscripts at the centre of our analysis and has produced a more thorough understanding of the man and scholar that was le pape de l'an mil.