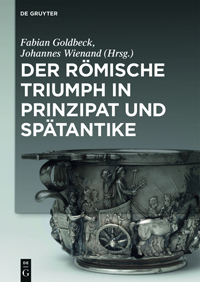 This comely volume brings together 18 articles (more than half in German) and an introduction (by the editors with H. Börm). All are solid pieces of scholarship illuminating the avatars of the triumph from Augustus to Late Roman times, with forays into late Republican (C.H. Lange), Byzantine (R. Pfeilschifter) and early medieval developments (G. Halsall). This might well be the systematic analysis of the ceremony under the empire that M. McCormick was calling for back in 1987. The title should have perhaps been more specific; the authors are in fact concerned with the political history and political instrumentalization of the triumphal ceremony, mainly gleaned from written sources and against the backdrop of Roman histoire événementielle. The narrower focus has its advantages, among which not least is that this constitutes a far more coherent collection of papers than most these days.

The editors first probe into the triumph as a medium of political communication, and T. Itgenshorst introduces the concept of Sieghaftigkeit (to be equated with potential for victory, as applied, in that case, to Augustus). This concept appears indeed to be the fulcrum of the whole volume. J. Meister and F. Goldbeck give a sense of the issues broached in it, whether very factual (and studied since the 19th c., in this case the paraphernalia of the triumphator) or ideological (the triumph as the emperor's instrument for emphasizing how he sees fit to run the empire).

A masterly synopsis of the issues involved in the study of Josephus' description of the Flavian triumph is provided by S. Mason. [1] The "scenes on the luxurious tapestries" that Mason mentions at 164 may have actually included actors, too, in a sort of multimedia tableaux. [2] At 152, he sees in Josephus's clarification ("around the gates, not those of the palace") - "a deviation from what might have been expected" in the topography of the triumphal procession, where in fact it may be just Josephus misunderstanding the Latin extra portam. G. Seelentag (208) considers the charismatic ruler, but sees this figure as emerging only at the beginning of the empire, whereas such leadership during the Republic has been widely studied. A lack of charisma can be supplanted by military victories, and a lack of military prestige - by building a wall (C. Michels on Antoninus Pius). Essentially though, the triumph will serve dynastic policy (K. Balbuza).

T. Hölscher's seminal article recasts public spaces as a stage for power. He concludes by amending Max Weber's (1922) view of Herrschaft and provokingly states that Roman rule is a combination of traditional, legal, and charismatic authority, with a strong additional "ideological" component. In turn, M. Icks investigates "bad triumphs" by "bad emperors". The discussion is prefaced by the humiliation of Crassus in Surena's mock triumph (Plut. Crass., 32.2-3), which for Icks is simply invented by Plutarch, but may be in fact his moralizing take on Euripides' Bacchae, featuring Crassus as Pentheus. [3] To the presentation of Nero's triumph of 67AD, also add J. Gagé's essential investigation of its eiselastic component. [4]

Two further contributions focusing on Sieghaftigkeit are penned by L. de Blois and M. Haake. The former compares Septimius Severus' decennalia with Gallienus' decennalia (although arguably evidence for the latter is incomparably poorer than for the former), to conclude that Gallienus' changes reflect a change in the "patterns of expectation to which emperors wished to relate" (337). M. Haake aptly speaks of a "quest for the (lost) victory" for the period 233-303 AD, scrutinizing the many ways for the potential for victory to be activated even without a link to military victory. Most issues discussed in part III are mirrored in C. Ando's paper, who notes the large number of victories in civil war in the "decentralized empire" and argues that the triumph was monopolized because "the quality of victoriousness was one emperors could not afford to share" (413).

The relationship between triumph and Christianity is explored throughout Part IV, notably in Pfeilschifter's contribution. The research questions are deceptively simple: how and when does the triumph absorb Christian elements? One could also ask how Christian narratives hark back to triumphal imagery. Not only because, as Claude Nicolet once put it, the triumph is a "grande liturgie civique", but because of triumphal elements in e.g. Mark (15:16 - 32) and Revelation (19: 11-16). [5] Pfeilschifter's view is that no Christianization of the triumph can actually be detected before the triumph of John Troglita in Carthage (546AD).

Another two remarkable contributions, this time on historical topography, come from P. Liverani (in Italian) and S. Bassett. Building on Hölscher's approach, they discuss the cursus triumphalis in Rome and triumphal monuments in general in Constantinople, respectively. They offer a very readable overview of issues that are notoriously thorny. As with any overview, things will have to appear a little simpler than they actually are (e.g., it is by no means to be taken for granted that the Arco di Portogallo was the new Porta Triumphalis as of 74 AD, 487). G. Halsall wraps up this far-reaching chronological journey by noting that victory remains central for "post-imperial kings", but is nevertheless Christianized in the early medieval world, especially with an influx of Old Testament imagery post 600 AD.

As to the twilight zone of what reviewers say a volume should have profitably included: more often than not, this has little to do with legitimate criticism, being hardly more than an admission that actual flaws in the book were too few and far between for the reviewer to earn his or her bitter bread. For the record however, tropaia receive only a couple one-line mentions, although they could have provided some prime study material. [6] Moreover, given that H.C. Lange makes a fair case that imperial triumphs should not be studied in isolation from the Late Republican transformation of the ceremony, it would have perhaps been useful to debate what the Roman triumph owes to similar Hellenistic pageants as well (Ptolemy Philadelphus, Antiochus IV). This, especially since, with Scipio, the Roman triumph irreversibly incorporates Hellenistic features. Moving on, Mars and Iuppiter are seen here as key religious figures in the triumph, but one should not eschew tackling what Dionysus and Apollo mean to the triumph, as stressed by Erika Simon and others. [7] Likewise, only few contributions move across disciplinary borders to enrich the theoretical framework, such as T. Itgenshorst on the mandatory belief in the unchangeability of ritual and M. Icks on ritual and legitimacy (319, n. 5.). Finally, on iconography: P.F. Mittag's riveting article on representations of the triumphator on coins and medallions from Augustus to Valens, bringing minor arts into the spotlight [8] is the only non-topographical paper to focus on sources other than literary. Art historical evidence is in general rather sporadically brought to bear on the issues at stake, e.g. by Goldbeck (the scabbard of the Mainz gladius, 108-109) and G. Halsall (6th c. bronze buckle plate in Dijon), although the reader will also see the occasional coin and reproduction of the Arch of Titus. But then again, the volume did not need to overstretch, and not including more material does not necessarily affect how well the existing material is processed.

The editors put forward that the triumphs of "Caligula, Nero and even Vespasian/Titus as well as Lucius Verus and Marcus Aurelius" have "hardly been researched according to their political semantics and have yet to be integrated in the development of the roman triumph as a whole" (9). Such statements, recurring throughout the book (e.g., 398), are perhaps unduly skeptical of the vast literature on these issues which have after all been bandied about since Mommsen's times.

The volume is almost impeccably edited (Itgenshorst is misspelled at 104, sestertius at 444 Fig. 14.12) and comes with generous English abstracts, bibliographies and indexes. While it does not set out to challenge our understanding of the triumph, but rather to summarize old and more recent trends in research, it packs quite the historical punch and will be instantly seen as a valuable textbook for students of this timeless topic.

[2] As shown by Östenberg, I.: Staging the World: Spoils, Captives, and Representations in the Roman Triumphal Procession, Oxford 2009, 251, a monograph which Mason uses elsewhere.

[8] Compare Rusu-Bolindet, V.: Representations of Trajan's triumph over the Dacians on Samian ware, in: I. Piso (ed.): Die römischen Provinzen: Begriff und Gründung, Cluj-Napoca 2008, 333-355. For the porta triumphalis on a terracotta from Aquincum: Kleiner, F.S.: The Study of Roman Triumphal and Honorary Arches 50 Years after Kähler, in: Journal of Roman Archaeology 2 (1989), 195-206, here 202.