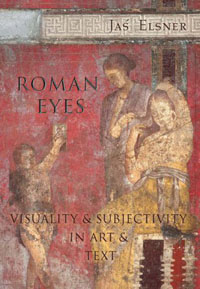 Jaś Elsner's œuvre has considerably expanded our idea of what is possible in the study of Roman art. The book reviewed here is a collection of nine articles published in 1991-2005, to which is added a prologue, one new chapter, and an epilogue written specially for this volume. Elsner has achieved a quiet breakthrough in method in that he contextualizes and juxtaposes topics that for too long have been debated separately: pagan and Christian art; figurative and literary sources; ancient and modern art theory; aesthetic and religious, public and private layers in the art of the center and of the periphery. Add to this the noisy brilliance of his texts, certainly more popular with his students than with his critics.

The author starts from the premise that by looking (at art), people acquire a sense of subjectivity, and borrows from N. Bryson the notion of "visuality" as a cultural construct, a "screen of signs" of "multiple discourses" taken from the social arena that "stand between the retina and the world" (25). Chapter one proposes that ancient art was not strictly naturalistic; apart from such a "horizontal", mimesis-related culture of viewing there was a second, a "vertical", ritual-centered culture of sacred images, in which the god confronts the viewer whose identity is engulfed in a larger divine reality and replaced with a temporary cult-generated identity (24-25). Ultimately, as the analysis of the Aphrodite of Cnidus (chapter one) and of Lucius's vision of Isis from Apuleius's Golden Ass (Epilogue) reveals, the two forms of visuality are alternating or even coalescing. A long awaited discussion by Elsner of Riegl's seminal ideas on visuality is again postponed (hints at 64 and 22, n.58). Chapter two probes into the ritual (as opposed to aesthetic) appreciation of ancient art.

Another important contribution by Elsner is his large scale effort (chapters four and seven) to infer, from ekphrases in Pausanias, Philostratus (the Imagines) and Lucian, patterns of image reception in Antiquity. The meticulous philological examination of these descriptions of (mostly) paintings in (mostly) Greek texts is quite post-structuralist in its implied tenet that one cannot interpret the work of art separated from the language of the interpretation. [1] Nevertheless, this should not be overdone; Foucault warned that "what we see never resides in what we say". Pausanias, held by Elsner to be the best connoisseur of Greek art of all time, is presented as the ancestor of style history [2], one that bravely embarked upon a restoration of a mythology of great artists equal to Homer's heroes in an attempt to live in their company in the sacred Greece of pre-Roman times. In a fascinating analysis spanning chapters three and nine, Elsner shows how Pausanias reifies style to rewrite history, while Lucian, on the other hand, uses style to construct ethnicity.

Chapters one and four through six are particularly informed by Lacanian psychoanalysis [3], although without specific terminology. The one moment where Lacan's influence is explicitly acknowledged is in the discussion of the "viewer being viewed" (in that case, Narcissus by Eros); but the underlying assumptions of Elsner's discourse are clearly that the eye is the cogito and the gaze is the desidero; that one only sees if one is seen; that we are formed by how others see us (the mirror-stage); and that seeing has a strong linguistic dimension. Roman culture is, in fact, deemed to be "highly ocular" (175). [4]

In analyzing Campanian paintings side-by-side with Roman poetry, Elsner's view is that the meaning of paintings has much to do with their emotional impact, and that this latter is achieved by negotiating the regime of the gaze between viewer and image. Thus, Ariadne and the way the characters in a painting triangulate with the viewer is the subject of chapter four. Foucault's classical discussion of Velázquez's Meninas [5] could have been usefully correlated with that of the watched viewer and of staffage (what he calls supernumerary figures) in Ariadne's representations.

Another original and bold idea (proposed in chapter five) is that Pygmalion's myth, far from trading in the tensions of the creator, is an account of the sculptor as viewer, with subsequent implications that Pygmalion the creator is an allegory for the writer and Pygmalion the viewer an allegory for the reader. To shed light on Ovid's text, Elsner examines the Aphrodite of Cnidus, which he sees as having a transgressive nature because it can be, as in Lucian's story, the object of male homo- and heterosexual desire. A related attempt to reconsider Aphrodite's complex nature proposed Gabriella Pironti, [6] which shows the goddess in an unexpectedly masculine, martial light. The myth of Narcissus (chapter 6) [7], on the other hand, the "limit-case of naturalism", is debated as "a paradigm for the inseparability of self from representation and for the inextricability of desire from either" (132).

Chapter eight is dedicated to the Projecta casket and to discerning a typically feminine way of viewing art objects. Against Maria Wyke [8], who sees the woman (around the mid-fourth century AD) as a "carefully crafted object of display", Elsner contends that the casket is made "to mirror and hence to affirm the identity of its female viewers" (217). The discussion on dress and nakedness on Late Roman silverware can now benefit from Susanne Moraw's recent work. [9]

Chapter ten debates the potential of religious art to help a collectivity to define itself and to create alternative spaces for self-affirmation. A border city on the Euphrates, Dura Europos, where in the early third century AD, domus ecclesiae, synagogue, mithraeum, and pagan temples are clustered on two adjacent streets, is the perfect case study of multiple subjectivities and conflicting central and peripheral artistic programs and identities. Stating that Christians, Jews, and Mithraists avoided representing the "act of sacrifice" in their art (266) is somewhat confusing. While Dura has yielded such scenes for Hebrew art (the binding of Isaac on the West wall of the synagogue, the sacrifice of Baal's prophets on mount Carmel, both in the Damascus Museum), Christian art certainly has no sacrifice to avoid (if the crucifixion is meant here, it does not appear in art until the fifth century), while Mithraic art consists mainly of the slaying of the bull.

Occasionally one fears that the monuments do not live up to the complexity of Elsner's analyses, and that the Romans contemplating those images would have had some trouble thinking along the sophisticated lines that Elsner puts forward. [10] But this handsome volume is certainly one of the most significant theoretical contributions to the study of Roman art since Classical studies opened up to the postmodern dialogue with the human sciences.

[2] True, Pliny the Elder has been seen in the past decade rather as a moral philosopher than an art historian (J. Isager) or as more interested in the progress of Roman conquest than in the evolution of Greek style in sculpture (S. Carey). But the distance between Pliny, who knew a thing or two about Greek art, and Pausanias is perhaps not so great as to justify Elsner in almost labeling Pausanias a Morellian avant la letter (52 sq.), while doing away with Pliny in a footnote (64 n.44: in Pliny there's "very little by way of stylistic expertise"). After all, both Pausanias and Pliny anticipate the Meisterforschung, a method still alive today, see O. Palagia / J. Pollitt: Personal Styles in Greek Sculpture, Cambridge 1996 (her name is misspelled "Pelagia" at 53, n.12 and in the bibliography).

[4] M. Jay: Downcast Eyes: The Denigration of Vision in Twentieth-Century French Thought, Berkeley 1993, e.g. 22-23 identifies in the antiquity a dominating visual Hellenism and a competing Hebraic undercurrent of language-focused aniconism.

[7] Chapter six was not originally published in "Reflections of Narcissus" (as Elsner acknowledges at p. X), but in Echoes of Narcissus (L. Spaas, ed., Oxford 2000.) It is of course endearing when the author misquotes himself.

[10] He is actually very well aware that all of our interpretations, no matter how grounded in ancient contexts, remain our own (p. XIV). However, perhaps Wordsworth's Daffodils (1804) would have set the bar for this ambitious volume a bit lower: "I gazed - and gazed - but little thought/ What wealth the show to me had brought", stressing a less problematized enjoyment of a rich visuality, perhaps closer to what the Roman viewer might have felt.