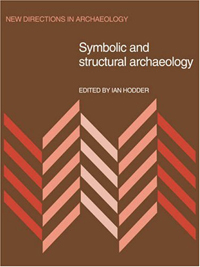 Vingt-sept ans après... The first brick in the edifice of today's dominant post-processual archaeology, Symbolic and Structural Archaeology (SSA) is one of the important archaeology books of modern times; as an acknowledgment of its contribution to the field, this collection of 14 essays and a commentary, issued in 1982, has been recently reprinted and honored with a jubilee assessment (by its authors and other specialists) in the prestigious Cambridge Archaeological Journal (17:2 (2007), 199-228) under the self-celebratory title "Revolution fulfilled? Symbolic and Structural Archaeology a Generation on". I will sketch here a reappraisal of this well known work and of its impact on the evolution of archaeological theory.

The main merit of SSA is to have opened archaeology in an unprecedented way to the concert of human sciences, and encouraging archaeology to respond in its own distinct voice. It was a clarion call for interdisciplinarity that harnessed a sundry of humanistic disciplines to the chariot of fire (or dirt cart) of archaeology - structuralism (Lévi-Strauss), philosophy and philosophy of history (Althusser, Marx), theory of practice (Bourdieu), sociology (Giddens) -, and gave back studies in agency, gender, style, and material culture. New Archaeology's penchant for anthropology was incorporated in the novel approach, but applied now to societies (generally Neolithic) more developed than hunter-gatherer settlements. Again, SSA has not accomplished this singlehandedly - it took a decade or two for its message to be fulfilled, but where it lacked in substance, it sure made up in its hats - off pioneer bravado.

The years before the 1980 conference in Cambridge where the SSA articles were presented, Hodder's (mostly British) team found themselves at an impasse as a result of the demise of positivism after Feyerabend's Against Method (1975), bracketed by Kuhn's and Lakatos's work, and the growing dissatisfaction in Europe with New Archaeology's research designs. [1] They felt they had to resort to a different epistemology. However, the ideas of Hodder, Miller, Shanks, Tilley et al. about how truth can be established in archaeology were at the beginning quite different; what they had in common was more a brilliant mind than a scientific stance. The solution, I suggest, was at hand and was called the inference to the best explanation, an old tool of the pragmatic philosophers, thoroughly described by Harman in 1965. However, the authors of SSA hesitated to enlist help from this direction, possibly because of the perceived failure of the joint venture between the "new" archaeologists and the author of the deductive-nomological method, Hempel. Nevertheless Hodder had understood that new forms of explanation were required in archaeology. He writes, "explanation is here not equated solely with the discovery of predictable law-like relationships but with the interpretation of generative principles and their coordination within relevant contexts" (13-14); also Moore (75) states "the process of explanation is fundamentally one of translation, i.e. rendering unfamiliar terms and concepts [...] observation, description and explanation are not a hierarchy of stages, but simultaneous". The attempt of forging new types of explanation is arguably SSA's most outstanding contribution to modern archaeology. Incidentally, I think von Wright's work could have offered here another basis of research; he had worked on "intentional explanations" which account for the action of agents by reference to their ideas and incentives, [1] with additional later work being done by von Wright on "understanding explanations", which pleaded for intelligible and coherent reconstructions. [2]

One of the goals of SSA was, to use Shanks/Tilley words of a later date, to "reinscribe the past into the present." [3] Ethnographic research, studies of symbols and ideology were to be put to use by archaeology as a cultural (SSA, 9 sq.) and social science (36 sq.) and a "historical discipline" (13) to unveil the concealed patterning of beliefs and the structuration of the social reality of past human communities, since there was no mathematical sword with which to cut the Gordian knot of unique and complex cases. Humans of past times were to be given back the individuality that had been divested from them by the statistical turbine of New Archaeology; a whole new concept of agency was behind this image of non-reified, creative people, inside a living past, capable of imposing their choices on the world. A side effect of this humanistic magnanimity was the difficulty in SSA (and in much of the ensuing post-processual work) to make cross-cultural comparisons and study change, since all evolutionary stages are perceived as unique. Another example of counterproductive stretching of the disciplines' boundaries in SSA is the definition of archaeology as "the study of man" (Tilley, 36); this is generous, but can yield very unspecific results, as the study of everything is dangerously close to the study of nothing.

Thinking about how influent post-processual archaeology, and the authors of SSA, have been in the past 30 years in the archaeological arena, it is hard to believe the ruthlessness of some of the reviews that SSA received (despite welcoming papers from Gosden and Trigger). Thus, Atkinson bluntly stated they "treat jargon as a substitute for thought" [4]; Yengoyan denounced their "wholesale borrowing of anthropological theory and explanation" [5]; Kohl felt SSA was pushing archaeology "from the desert of positivist truth [to] the swamp of arbitrary Culture where all historical and social knowledge is uncertain". [6] A reminder that, when writing about heresies, one must be careful, since one does not know which of them will be turned by history into orthodoxy.

More attention deserve perhaps the comments presented by the Cambridge Archaeological Journal, in which Hodder himself, with quiet overall satisfaction, pointed out lucidly the drawbacks of SSA. While Leone's criticism about the post-processualists still not having an epistemology, and therefore not being capable of becoming truly reflective, is less poignant because it is applicable to any phenomenological approach in the humanities, Renfrew's concern that with such a relativistic interpretive framework, post-processualists will be unable to refute the searchers of ley lines hunters and the Atlantis enthusiasts, is more serious. [7]

SSA does not make a clean cut with the past research. The work of Clark and Childe was used as a departure point. Although Hodder was fighting New Archaeology, as well as Lévi-Strauss's structuralism as unable to "explain particular historical contexts and the meaningful actions of individuals constructing social change", (8-90), a lot of both is retained, (admittedly not the functionalism of the former, not the free exercise of imagination of the latter) immunized with massive doses of Bourdieu and Giddens, and blended with Marxist overtones in a hyperclever discourse - a treat. Even so, the deference towards structuralism is imbued in the book (Wylie's anti-structuralist essay on epistemology is strictly structuralist), and Hodder diplomatically states that SSA is only "an extension of New Archaeology" (9), an "asking of additional questions" (vii). Also, Shanks/Tilley's influent chapter on Neolithic mortuary practices is obviously reverent to Binford.

Today, the larger portion of archaeological volumes with an explicit theoretical standpoint can be indexed under the label post-processual, sometimes called "symbolic", interpretive, reflexive, contextual, processual-plus, and so on. However, this does not exhaust the scientific landscape since other archaeologists have gone on unabatedly to produce solid research under other regrouping labels. This includes, in particular, syntheses across larger areas, which were seen as outside the orbit of post-processualism [8], together with other approaches like cognitive [9] and holistic archaeology [10]; behavioral archaeology, with Schiffer as its harbinger, has also made major contributions to modern archaeology, less in the field of theory and more in the formation processes of the archaeological record.

Post-processual archaeology is highly theoretical and although this was somewhat remedied through Hodder's brilliant Archaeological Process (1999) [11], there is still a marked discrepancy between the body of theoretical work and that directly addressing the archaeologist at work in the trench. I cannot agree to see archaeology defined as only (!) the study of humanity through material remains, because archaeology is also the science of obtaining and recording those material remains (turning them into texts that any other scientist or layman can work with). The most simple, blue-collar of us field archaeologists reading some of the post-processual texts have been reported to feel simultaneously compelled by the beauty and the inventiveness of the arguments and convinced that they are being somehow duped. A rapprochement between practitioners and theoreticians should perhaps be the next step of post-processual archaeology.

Some of SSA's articles do not have analytical depth, nor do they claim to; but what they really have to give is the attitude. If, occasionally, the tone is highfalutin and Nietzschean, and if the theoretical apparatus summoned to interpret the archaeological evidence sometimes fails to make the problem easier, it is because SSA's theoretic breakthrough was achieved with more gusto and alacrity than rigour: it took Hodder's acclaimed field project in &#199atalhöyük (1993-ongoing) to give the baptism of fire to post-processual archaeology, and to show that theoretical awareness always, without exception, enhances the scope of archaeological investigation. But looking back, the revolution was fulfilled - archaeology is now well poised between the editing and the hermeneutics of archaeological record.

[6] Yengoyan, A.: Digging for Symbols: the Archaeology of Everyday Material Life: Review article, in: Proceedings of the Prehistoric Society 51, 1985, 329.

[9] E.g. Renfrew, C.: Archaeology & Language. The Puzzle of the Indo-European Origins, London 1987, but see on the post-processualist side: Hodder, I.: Domestication of Europe, Oxford 1990.