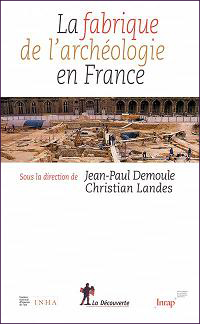 "Whatever is in the earth, time will bring forth into open day light" (Horace Ep. I,VI,24, tr. C. Smart, 1755) - very often by the building of parking lots, supermarkets, and highways. Rescue/salvage archaeology and its wiser sister, preventive archaeology, are the instruments modern society has designed in order to mitigate this destruction. [1] But even after the advent of this type of excavations in the 1970s, more archaeological sites around the world were destroyed by mindless development than in the whole history of mankind. The book reviewed here, a collection of twenty articles, is an institutional and legislative history of rescue archaeology's ups and downs in France. [2]

Like politics, rescue archaeology has to make the best of a dirty job. A. Schnapp's discussion (chapter 1) situates rescue archaeology between oblivion and memory - society needs to forget (creating space for new buildings), but also to remember (preserving as much as possible). An institution fundamental for the history of French archaeology is the Musée des Antiquités Nationales; L. Olivier's chapter 5 stresses its paradoxical beginnings, which owe much to a Dane (C. J. Thomsen, the inventor of the Three Age System), a German (L. Lindenschmit from the Römisch-Germanisches Zentralmuseum), and to a gift of Scandinavian antiquities presented to Napoleon III in 1861 by the Danish King Frederick VII. The author dwells on S. Reinach's mandate at the Museum, on H. Hubert's reforms under the influence of Durkheim's (and Mauss's) sociological thought, and on its re-organization by Malraux. N. Montel prefaces chapter 6 with a copious excerpt (101) from Hugo's famous plea for protection of archaeological remains, the article "Guerre aux démolisseurs", published in "Revue des deux Mondes" in 1832: "we make laws on everything, for everything, against everything, about everything, [...] but not a law for our memory, our art, our history [...]".

In 1913, in a one-man fight, Senator J. Audiffred proposed a bill that would give control of excavations standards to the state, making authorizations compulsory. The law never passed, the communis opinio being that these regulations would have hampered the work of honest archaeologists, while being easily broken by those less morally inclined. (114). J. P. Reboul's chapter 7 focuses on J. Carcopino's career as state secretary for education in the Vichy regime. The discussion is still open as to how freely he applied anti-Semitic legislation or why he agreed with the "export" of French works of art towards the German Reich. It is certain, though, that his laws (1941-2) finally gave French urban archaeology a legislative framework.

The core of the text showcases local experiences in rescue archaeology. A case study on preventive archaeology in the Aisne valley (chapter 9), shows the problems it faces after the changes in legislation of 2003-2004. The state indirectly encouraged quick survey and superficial trial trenching (which very often fail to identify respectably rich Iron Age sites, 155-156), whose results were eventually under-interpreted to the effect that many sites were declared non-existent. Chapter 13 continues the debate in stressing that, as an effect of these very laws, only sites over 5 ha can be automatically trial-trenched even if no archaeological remains are known (previously the limit was 1 ha). V. Blouet also discusses (207-208) two red herring arguments generally thrown in the face of rescue archaeology: why dig so much, when we can extrapolate from what we have already excavated (but is our sample representative?), and why not dig less, but better (yet what about statistical observations?).

Rescue archaeology in Rhône-Alpes (chapter 11) comes into being in the 1970s, after, in the previous two decades, 17 ha from the ancient city were destroyed by developers without any archaeological observations. Similar scandals have accompanied the destruction of the Roman curia from Avignon and that of the Poitiers forum. Just like the outcry around Shakespeare's Rose theatre in the UL, these instances have precipitated public awareness of the urgency of state-enforced rescue archaeology. The media have played their part in this process, as shown by the implication of "Les nouvelles de l'Archéologie" in the Rodez scandal (1997), when a Gallo-Roman site was destroyed by a developer with only a letter from the prime-minister (chapter 10).

In chapter 14, the goals of rescue archaeology are broadly and lucidly defined as excavation, publication, conservation and management, and "socialisation" (public outreach) by the archaeology unit of Saint Denis. The story of the biggest preventive dig ever conducted in France: the excavations of the Napoleon courtyard around the Louvre pyramid (1983-1986, budget: some 8 mil Euro) is told by director J. P. Trombetta (chapter 15), whose fine stratigraphic excavation uncovered there the workshop of the 16th c. potter Bernard Palissy. Interestingly, at the same time, La Cour Carré was excavated in high speed by M. Fleury, and the comparison between the techniques and style of the two teams led to a sartorial, if overblown, media-driven polemic over "left-wing" and "right wing archaeology." Revolutionary or not, among Trombetta's "pharaonic" staff of 150-200 were some dedicated full-time to conferencing during school class visits and open-house days. One problem with this project appears now to have been not setting aside part of the budget for a "global" (as opposed to scattered in many journals) publication. In any case, this major dig is responsible for the apparition of a wage schedule for "shovel bums," and thus marked the professionalization of rescue archaeology in France.

The final chapters revolve around the leading institutions in contemporary French archaeology. The 1992 Malta Convention on the Protection of the Archaeological Heritage (chapter 16) offers the framework for national regulations in Europe, and it is perhaps time now for an international convention to further the Malta program. The main institution to supervise French archaeology in 1973-2001 was AFAN, Association for National Archaeological Excavations (chapter 18). A great blow was dealt to AFAN in 1998 when the state decided that rescue archaeology must respect the laws of the market. Still, it is doubtful that the developers really want high quality, and not simply the quickest job for their money. Archaeology does pay a price for the fact that it is a scientific discipline which interferes directly with economic activities. In 2003, the State Council was still describing rescue excavations as economic activities (268); these were officially promoted to the category of "research" in 2008... The (initially controversial) successor in 2002 of AFAN, INRAP (Institut National de Recherches Archéologiques Préventives), (chapter 19) now directs the European Commission's five year project "Archaeology in Contemporary Europe," the largest ever European program devoted to archaeology, with a budget of 4,8 million euros.

An elegant final chapter by J. P. Demoule warns against a bleak future when rescue archaeology might become totally severed from research archaeology (282). The agenda of the institutions regulating rescue archaeology should now be topped by the duty to turn data into knowledge - to focus on post-excavation work, and not forget that ten monographs cannot replace a synthesis. Demoule also advocates a shift of the epistemological paradigm in rescue archaeology: turning all preventive archaeology in systematic archaeology in certain regions, while outside those regions, only major sites and major developments would be archaeologically supervised.

Put simply, what this book (and rescue archaeology) is all about is that parking garages are very important, but the Bodleian Library ought not be demolished to make room for one. We can find a different location for this parking lot - or, if it has to be right there to make everybody happy, it makes sense to allow a team to rescue the incunabula. "The archaeological factory" is a sober book, with no false hopes in a world in which nothing would move without an archaeological permit, and never claiming such a world would in fact be better. [3] The endless talk of protecting archaeological remains bores many, especially in poorer countries. However, if one day "all that remains for us will be concrete and tyres," as in Larkin's poem, people will realize it is impossible to lose one's past without losing one's freedom.

[1] In the USA, this is also known as contract archaeology. In France, the terminology opposes the "fouilles de sauvetage", a name replaced in 2001 with "fouilles préventives", to research excavations, "fouilles programmées / systématiques".

[2] The official position is that threatened archaeological sites must be "preserved by study." This is a reaction to the British approach of "preservation by record" (PPG 16, 1990), as criticized by G. Andrews et al.: "Interpretation Not Record: the Practice of Archaeology," Antiquity 74, 2000, 525-530. For background information as to rescue archaeology in other countries, see K. Bozóki-Ernyey (ed.): European Preventive Archaeology, Budapest 2004; H. Cleere (ed.): Archaeological Heritage Management in the Modern World, London 1989. Comparisons to major rescue operations outside France (at least the 50 ha of Heathrow T5) would have been a plus.

[3] The authors convey the impression that it is mostly buildings and public works that destroy archaeological heritage. In fact, rescue archaeology must also find a way to cope with the different threats posed by mechanized agriculture and land reclamation, as well as looting and even tourism. On the other hand, the constantly accumulating backlog of data processing and publication and the shortage of storage space have increasingly become a problem in Japan as well as in Germany, occasionally blocking new excavations.