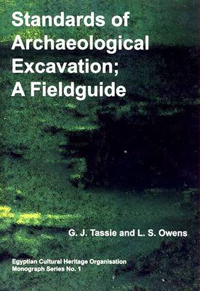 This comprehensive handbook explores excavation methods (ch. IV-V) and recording standards (VII-IX), but also covers a large array of issues from site management and logistics (III) to finds processing (XI). Mainly culled from other prestigious textbooks and held together by authors' experience from Tell Abu Dawood in Egypt, it can be a serviceable compilation if one winnows out the inaccuracies. While the account of measuring and surveying techniques is one of the strong points of the volume, the Achilles' heel, it must be said, is the understanding of archaeological stratigraphy.

As an upgrade on older field guides, this volume incorporates detailed instructions about using the total station (161-168) and collecting DNA samples (127-129). It also features many checklists and tables of information (list of personal and site equipment (Table 1), recommended storage materials (Table 49), and digressions such as the fifty pages on Egyptian construction techniques (217-270). Truth be told, this is not the work of skeptics. The authors have no reservations about how directly material culture can speak about ethnicity and social behaviour. [1] Further, they are assured that, while written sources may be biased, material culture invariably tells the truth (xxi), when in fact, constructing historical narratives from the archaeological record has to deal not only with the insuperably arcane relationship between what has been preserved and what has happened, but also with the personal equation of the archaeologist. [2]

Half of the text (175-445) is - commendably - dedicated to the written, drawn and photographic record of the excavation. With this as the cornerstone of the book, the authors acknowledge the paramount importance of recording in archaeology. The accompanying CD includes a 100+ page set of pro forma for (almost) everything one can encounter on an excavation. Particularly elaborate are the recording forms for mudbrick, macro and micro-faunal remains, and special (small) finds. In much detail is presented the hair recording form, dedicated to wigs, hair offerings, and hair jewellery (335). This may be of use in Egypt, but authors of handbooks for most other regions will probably not have chosen to go over it with the fine-tooth comb. Other somewhat exotic forms are dedicated to recording textiles, basketry (and wattle), rope / cordage (and sandal sole) and some types of artefacts (but not coins or glass objects). A couple of the proposed forms are too general, such as a building recording form used for temples (with entries for "number of obelisks" etc. - certainly such a building will be recorded on more than one sheet of paper). Novelties in the data recorded include the use of dorsal cortex count instead of the older triple cortex typology to classify debitage on the stone tool sheet, which otherwise recalls the Levroux forms, and the series of angles measured for skeletons on the burial sheets, designed in the paradigm of Tell el-Hesi and University of Pisa's Benabbio. Other welcome innovations are the use of alternative interpretations, the entries for instrument height, volume of certain features, and ancient ground level, as well as the comments on whether the damage to an artefact occurred at pre- or post-deposition stages.

Tassie and Owens not only dedicate 200 pages to explaining how such sheets ought to be completed, but also endeavor to offer some thirty examples of filled-in recording forms, which is rarely done in recording manuals and indeed remarkable. However, the authors' forms do not always observe their own directions. For example, the very first sheet (for contexts) exhibits 14 such differences: the text underscores the need for unitary terminology, but the form employs "disk-shaped" and "weakly cemented" instead of "discoidal" and "weak cohesion" recommended in the text, together with the imprecise terms "original fill" (instead of primary fill), and "primary pit" (sic). There are other problems with these forms. For example, they require the archaeologists to write down both stratigraphic and "physical" relationships to other contexts (cf. the serpentine discussion at 447 about non-redundant matrix relationships); on some sheets (528, 538), even stratigraphic relationships between artefacts are considered. The plans and sections of contexts are not tied into the site grid, and occasionally context numbers are floating on them, with no contours (535), while heights are insufficiently recorded (just seven heights on a 100sq.m. plan, Fig.134). On the room recording form, the walls are said to be strengthened by wooden beams, but no wood sample was taken; a brick sample was taken, but no brick structures are mentioned in the sheet. One sample elsewhere was taken to assess if "botanical remains are ancient or modern", although samples should be taken from secure deposits, if only because their analysis makes a dent in the excavation budget. The important prompt for "datation" is missing on many forms. It appears that the Museum of London and the Gezer excavations have been sources of inspiration for the recording system proposed here, but no other systems are mentioned; at least those used in Egypt could have been analyzed, such as Patricia Paice's Tell el-Maskhuta or University of Toronto's SEPE project. [3]

A recurring problem in this field guide are the erroneous statements allegedly taken from respectable sources. For example, Fig. 33 "after Drewett 1999:110" modifies Drewett's drawing to show that the intercutting pits should be excavated simultaneously, when in fact all contexts in the more recent pit must be excavated (and therefore numbered) first. Two baffling assertions, namely that a context may be "cut by a stratigraphically earlier pit" (8), and that "the physical stratigraphic relationship [...] between deposits is vital to understanding patterns of discard on site" try to find legitimacy in Steve Roskams's excellent manual. [4] The exposition of basic stratigraphic principles in Figs. 173-175, "after Westman 1994:10-11", brings little changes to the original drawing from the quoted MoLAS manual, but enough to make context 5, in fact, have a direct relationship with 3 (5 earlier than 3), despite the caption's claim to the contrary. In Fig. 183, "after Harris 1989" [Figs. 21, 22], the authors mistake the destruction interface from Harris for a foundation trench, highly implausible in their stratigraphic configuration. In Fig. 40 ("after Drewett 1999:116 and Webster 1974: 95"), artefacts on a floor are said to give a terminus post quem (TPQ) for the construction of the associated wall (correction: terminus ante quem, TAQ), and those in the layers cut by the foundation trench are said to give a TAQ (correction: TPQ) for the building of the wall. The same confusion about these fundamental archaeological notions is present at 79, where Canaanite pottery found below a well-dated Egyptian context is said to give the latter a TAQ (in fact, it is given a TAQ by the latter). Finally, because the authors misread Edward Harris (Principles of archaeological stratigraphy, London 1989, 2nd ed.: 36, misquoted at 448), in the drawn section at 52 the deposit through which the foundation trench of wall 12 cuts is mistakenly considered to be consisting of two different deposits on either side of the cut, while the different deposits accumulated on either side of that wall are mistakenly considered identical. These are unfortunate inadvertences as they pertain to the very core of stratigraphic reasoning.

Further, the usage of terms such as locus, context, and feature is inconsistent. The term "lot" is defined as an arbitrary unit of excavation (or spit, 3), although "lot" generally designates the pottery from a certain context (excavations in Corinth, Athenian Agora, Terqa etc.) Confusingly, a lot is then said to occasionally "contain several contexts, which must be excavated separately" (194). [5] The authors also advocate backfilling one trench with the spoil resulting from the next (24, 136) which was one of Macalister's doubtful procedures at Gezer. [6]

Clearly a lot of effort and enthusiasm went into writing this volume, but it is difficult to say who its audience should be. Beginners would have here a lot of facts and figures conveniently brought under one cover, but not all are reliable (caveat emptor). Specialists will be able to read their way through this (partially bowdlerized) version of archaeological stratigraphy, but will arguably be less prone to avail themselves of general handbooks.

[1] "[P]ottery decoration effectively serves as social or ethnic markers" (301) and "typologies are used as a means to establish distinct social groupings" (312).

[2] In the same spirit: "pits contain a great deal of socioeconomic information" (103): what pits contain is materials - the information exists only insofar as they are construed by the archaeologist.

[5] Also: a "Point P" locus number is not given to "pits in a surface" (503), but to the pottery found shattered on that surface, and a stratigraphic interface does not refer to the "objects dropped on a flooring surface" (as implied in 502).

[6] A short list of cavils follows: WHS, as in the well-known trowels, does not stand for "Welded Solid Handle" (26) but for William Hunt and Sons; tip lines in deliberately infilled features are not "anthropomorphic" (188) but anthropogenic; the Pantone colour chart is misspelled "Panetone" (301); "krotavinia" (92; correction: krotovina) cannot be equated with bioturbation as a whole (505); Wheeler's witticism about there being no right way to excavate, but just many wrong ways, is used unattributed (102); "rabotage" does not mean "sweeping of surfaces" (61), but leveling a surface (with a trowel); dendrochronology does not branch into "uranium thorium dated corals and varve counted marine sediment" (as implied at 91).