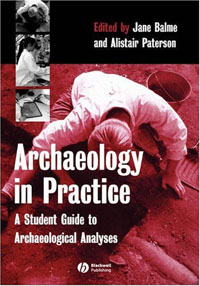 With no statistics to back my words, I will venture to say that in the past 20 years the number of archaeology books published has increased considerably, in a way that few other branches of learning can boast. Not that this is entirely a reason to rejoice.

On the one hand, the causes for this phenomenon have little to do with more/better research being carried out, but rather with the fact that archaeology was until now lagging behind older disciplines anyway, with more aggressive financial strategies on part of the publishers and more rescue excavations being routinely done, the "Indiana Jones"-movies, etc. Archaeology sells, and because of that, it seems to be par excellence the science in which all books are introductory, colourful companions, manuals, great discoveries in great photos - any step beyond this, apparently, risking to alienate the public. It is of course great that larger audiences are attracted by archaeology, but I wonder if the quality of this attraction, as nurtured by a proliferation of general, sometimes gaudy, books, will give archaeology the chance to be understood by the public on a profound level. Rather, what happens is that none of the humanities is now more threatened with commodification.

"Archaeology in practice" is, granted, nothing of this sort - it is a collection of solid, if introductory, articles on several fundamental aspects of field and post excavation work, written mainly by Australian and British specialists. Nevertheless, given its general character, it is no surprise that it finds its niche already occupied. P. Bahn / C. Renfrew's Archaeology, theories, methods and practice, which gets a new edition every four odd years since 1991, L. Ellis's Archaeological method and theory (1999), J. Bintliff's Companion to archaeology (2004) and H. Maschner / C. Chippindale's Handbook Of Archaeological Methods (2005) already cover, with connoisseurship and panache, everything I seem to be able to find in Balme/Paterson's book.

The editors propose, as they state in the preface, a series of 15 essays on how archaeological materials are used to answer research questions and on what the archaeologists do with the evidence, rather than how they obtain it in the field. However, what brings together these essays (which do include shell, bone, stone analysis, but also stratigraphy, historical sources and consulting stakeholders) is less clear. Why does rock art deserve a special chapter, which introduces concepts such as style and symbolic systems, and not, for example, terra sigillata or bronze age hearth typology? As happens more often than not, if the theme is not strictly circumscribed, the more articles or topics the editors struggle to include to make the volume more "comprehensive", the more those which have not been included stand out.

A. David's essay on "Finding sites" (remote sensing, field and geophysical methods - GPR, resistivity, magnetometry etc) is welcome since the field is advancing literally every day and, while a new article of Phidias every month would be futile, any contribution on non-invasive archaeological techniques is ever more accurate than the previous; especially valuable (i.e. up-to-date), pp. 26-30 on underwater sensing. David's candid treatment of surveying, on the other hand, doesn't do justice to the many subtleties of the topic, especially in the interpretation of data (e.g. S. Alcock / J. Cherry, Side by Side Survey, 2004). Additions to the bibliography range from matters of detail (J. M. Rivers et al, Investigation into the Origin of Magnetic Soils on the Oak Ridge Reservation, Tennessee, Soil Science Society of the America Journal, 2004), to S. Parcak's recent Satellite Remote Sensing for Archaeology (2009). There is always, I think, some sort of hunger on the part of the reader after reading a chapter on remote sensing, to "go dig them ghost features on that map"; it would be, therefore, commendable on the part of any author if such methods were advocated particularly for rescue excavations, where they can help the most, and not convey the impression that we are in a dire need to find new sites to excavate.

The editors' own chapter on stratigraphy is one of the least rewarding in the volume. "Stratigraphy is [...] the interpretation of horizontal layers that form the deposits of a site" (96), "many cultural layers such as walls are horizontal rather than vertical" (99), in the cross section not only units and interfaces, but also the features get numbers (107). Excavating in artificial units receives only a mild critique at p.104. When it comes to recording, things are downright wrong: "colour and texture of each layer have to be described in everyday language" (105), or blissfully innocent: first you record the stratification, and then you interpret it (106). No use or mention is made to the authoritative five volumes of the "Interpreting stratigraphy" conferences (1991-2000).

S. Holdaway's substantial chapter on "Absolute dating", despite the dry title, is the book's main asset. Few archaeologists can pretend they don't care about how their material dates, and even if this does not mean we have to do accelerator mass spectrometry ourselves, it is always good to know what language the lab people actually speak. The overview of dating techniques is alert and all-encompassing, with, however, the most thought provoking part being the discussion on pp. 129-139 on what time and date actually mean in archaeology. This treatment owes much to A. Ramenofsky's underrated work on units in archaeology (1998), Husserlian in her assumption that the subject is a time generating element. Holdaway does not refrain from also touching on the Pompeii premise (L. Binford), fidelity and resolution (A. Behrensmeyer), time averaged sites (N. Stern), scope and microstratigraphic acuity (D.E. Schindel), autocorrelation (S. Holdaway and N. Porch), and time perspectivism (G.N. Bailey).

A chapter on stone artifact analysis (C. Clarkson, S. O'Connor) elegantly moves from discussion of classification and assemblages to Hertzian cones and outrepassé terminations and opens the way for a series of straightforward chapters (7-11) on archaeological analyses: residues and usewear (p. 210 procedure for looking at stone tools, p.216-218 plant residues - starch, raphides, phytoliths, resins), and then ceramics (in L. Ellis's competent manner; note at p.251 the "object condition and examination report"). The animal bones chapter shares the latter cautionary tales about how the best way to analyze something always depends on what you want to find out, and with the plant remains chapter the emphasis on the need for reference collections (on site even!). S. Bowdler's "Mollusks and other Shells" is the closest these essays get to the issue of sampling, referred to en passant but never acknowledged for the enormously complex topic it is. (Orton's Cambridge manual from 2000 is here unsurpassed). I should say at this point that what the book could have included with great benefit would have been chapters on sampling, formation processes and recording in the field.

A chapter on the use of historical sources seems to fall outside the subject of the book and offers few other compensations for that ("Create a plan, but be flexible" (391). "Read with a critical eye" (392). "Critical thinking requires an open mind" (393)). The same goes for the concluding essay, "Producing the record", a title which sounds fiercely post-processual (so now the archaeologists actually produce the archaelogical record!), but turns out to produce tips for writing reports - with ideas that would nonplus any post-processual author: "separate actions from thought, discoveries from deduction" (p 412), and anyone with methodological concerns: the method part of the report "should be obvious: say [...] where did you survey?, how much did you dig?" (413).

As an aside, it is striking how bibliographies of these essays follow the general trend by banishing practically all contributions that are not in English. Literature in English is vast and valuable, but I fail to see why we shouldn't also draw on traditional fields of excellence from other areas, such as German rescue excavations (Rheinland and Brandenburg), French underwater/aerial archaeology and prehistoric stone technology, or Italian theoretical reflection (R. Francovich, D. Manacorda, E. Giannicheda).