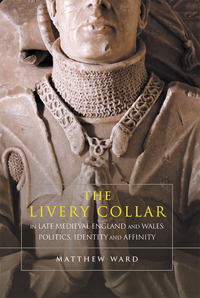 The livery collar was the most palpable way that a medieval grandee would mark his affinity - the network of friends, retainers, and other supporters owing allegiance to him. In a very real sense livery functioned as gang colors do now, and great tension could arise when rival groups of retainers, each bedecked in their respective liveries, encountered each other. Like many such things in the later Middle Ages, the granting of livery collars was eventually monopolized by the monarch - but in England, there was the added twist that the throne itself was contested between rival affinities, commonly designated Lancastrian and Yorkist. Examining the use of their respective collars is the task that Matthew Ward has set himself in this book. The Lancastrian Collar of SS (pronounced "Esses") and the Yorkist collar of suns and roses are referenced in narrative and record sources, and are carved on a remarkable number of personal memorials. Ward, currently a postdoctoral research fellow at the University of Nottingham, has produced an interesting, thorough, and significant examination of this important piece of late-medieval regalia.

The book's first section focuses on the cultural and political meaning of livery collars in fourteenth and fifteenth century English society. At its most basic, the granting of collar was an attempt to establish a reciprocal relationship between lord and retainer - i.e., protection in return for service - and was an aspect of the "bastard feudalism" that allegedly prevailed in late medieval England. It is true that a collar might indicate that its wearer was "owned" by someone else - but who would not want to be owned by someone important? Indeed, although collars were normally given to gentry and rich merchants, occasionally they were bestowed on lesser mortals, and served to elevate them socially (although there was no standard design, and collars generally increased in elaborateness and expense with the status of the recipient). Perhaps more to the point, a collar represented the protection of a powerful patron, and might encourage arrogance on the part of its wearers, especially when they were together and enjoying the solidarity of a group identity; contemporary writers railed against such factionalism. However, when reigning monarchs bestowed collars, they took on a less sharply political tone. It is clear that many recipients wore them as symbolic of their own governmental service, not their devotion to "Lancaster" or "York," and happily switched one for the other with a change in regimes. The collar, indeed, was useful for extending the king's presence into the provinces, especially given the medieval penchant for conflating the symbol with the thing it symbolized. Part of the collar's appeal was its enigmatic or multivalent symbolism, a common effect in the late Middle Ages, and Ward proposes some theories about what the Lancastrian "S," and Yorkist rose and sun, actually stood for. Potentially hundreds of people could receive collars for various reasons; in this sense, it could be more useful to the monarch than bestowing (say) the Order of the Garter, whose membership was strictly limited. Collars could torn off if the lord was unpopular, or demanded back if the retainer has lost favor, but they also had intrinsic value: they could be passed down within a family as heirlooms, or if necessary pawned or sold for the value of the metal and jewels. Finally, it is important to note that the SS collar eventually "won" - rather than devising a hybrid Lancastrian-Yorkist collar (cf. the famous double "Tudor" rose), King Henry VII deprecated the collar of suns and roses, and revived the collar of SS. In this form is still worn by certain royal agents on formal occasions today.

The book's second section constitutes an examination of monuments across England and Wales featuring collars, constructed over the period 1371-1540. These include tomb effigies, memorial brasses, and portraits in stained glass, although many more such monuments would have once existed. The monuments are spread across England and Wales; a few may be found in eastern Ireland, and some on the continent (including one to Baldassare Castiglione, who was given a collar of SS by King Henry VII). A pair of maps illustrates the distribution of collars by monument type (glass, brass, sculpture, etc.) and by type of collar (SS, Yorkist, or other); these monuments are also listed and identified in an appendix. Ward points out that the heaviest concentration of collars is in the south and east of England, with fewer further away from this, although all English counties have at least one collared memorial. The SS collar outnumbers the Yorkist for obvious reasons; in fact, some indeterminate collars may have once borne suns and roses, and were effaced after the Tudors took over. Nonetheless, plenty of Yorkist collars survive - these are largely found south of the River Trent, while Lancastrian collars prevail in Midlands. A possibility exists that collars on memorials were stock items from workshops, and that workshop location may have dictated where memorials ended up; this might be a reason why certain clusters of one type of collar or another are not correlated to Lancastrian or Yorkist estates. But Ward's extensive prosopographical investigations of the Devonshire and Welsh families whose members included collars on their tombs lead him to propose that in these two areas, the collar signified local, horizontal connections of kinship and marriage alliance. Few of the families were staunchly "Lancastrian," "Yorkist" or "Tudor" - they did not fight on either side in any battles. They were simply loyal provincial subjects, trying to cement their place against local rivals, and used their collars as a means of signifying this. Thus were the motives for placing a collar on tomb sometimes different from why it was awarded in the first place.

This is a subtle and sophisticated argument, and one is impressed with Ward's willingness to pursue this line of inquiry so extensively, thereby using the livery collar to open up some new vistas onto late medieval English politics, society, and culture. Previously the collar was an object of mostly antiquarian interest, and Ward deserves commendation for endeavoring to move beyond that (although sometimes the theory that he invokes seems gratuitous: do we really need Bourdieu's theory of cultural capital to know that the collar was prestigious, or Saussure's semiotics theory to know that it meant something?). But all things considered, this first book-length study of the livery collar is also a great first book. Ward claims (136 n. 176) that he is researching why Henry VII was so set against the Yorkist collar even though the king claimed to have united the two warring houses; one hopes that the results of this new inquiry will be as worthwhile as the book under review here.