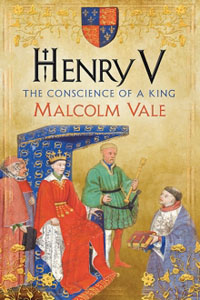 To William Shakespeare, King Henry V of England, who reigned between 1413 and 1422, was the kingdom's greatest medieval monarch - a judgment that many historians would happily agree with (although there have been some dissenters, most recently Keith Dockray). Henry has thus been the subject of many biographies, usually focusing on his stunningly successful Agincourt Campaign (1415) and the diplomatic triumph of the Treaty of Troyes (1420), which named him regent and heir of the kingdom of France. Rather than write another such book, Malcolm Vale chose to focus on the king's "conscience" (recently posited, by Jeremy Catto, as "at the center of fifteenth-century political decision making") - or more accurately, Henry's "personal involvement and intervention in matters both public and private" (ix). To this end, Vale favors impersonal archival and documentary material, rather than chronicles and other narrative sources, which were so often written with a political ax to grind. The book, he claims, is not a biography so much as a study in "the workings of [Henry's] mind and their translation into political behavior, religious observance, and patronage of the peaceful arts" (xv). Vale, professor emeritus at the University of Oxford and the author of an extensive bibliography in medieval Anglo-French relations, has produced a novel view of Henry's governance.

Chapter 1, "The Everyday Business of Kingship," focuses on the petitions, largely informal, that Henry received directly from his subjects throughout his reign. Government was increasingly bureaucratized, of course, but the household was still a power center, and requests for favors or for redress of grievances were common. Henry personally reviewed many of them, and granted more than a few. His instincts may have been despotic, and there was clearly a widespread fear of incurring royal displeasure, but he also appears to have been merciful, sometimes specifically acknowledging the poverty of petitioners as a mitigating factor, and he frequently consulted with other appropriate parties before making a final decision. Thus did Henry win a reputation "for just judgment and even-handed administration of justice" (37).

This impression is maintained by Chapter 2, "'In mine own hand': the Personalization of Kingship," which examines documents written by Henry himself, and bearing his "autograph sign manual" (i.e., signature). Vale contends that Henry's reign saw a vast increase of such instruments, which added an extra layer of sincerity and authenticity to expressions of the king's personal will. Vale also shows that Henry V (not Henry VII, as commonly thought) was the first king to personally review his household's financial accounts, writing such notes as "inspeximus" ("we have inspected") in their margins. Close supervision of every area of government showed that the king did more than reign, he actually ruled, and far from giving the impression of being a meddlesome micromanager, Henry appeared to care about his regime in a way that his infant successor simply could not. Military victories and diplomatic respect were not the only things that people missed about Henry V once he was gone.

The third chapter, "The King and the English Language," examines Henry's promotion of his kingdom's native tongue for governmental purposes as another vehicle for the personalization of his kingship. English had been growing in popularity as a written language, especially after Geoffrey Chaucer, but it was still marked as parochial, low-class, and even heretical (due to its association with Lollardy). Furthermore, its various dialects were not always mutually comprehensible. But increasingly, it also connoted directness and authenticity (as against the artifice of French). Henry's use of English, therefore, was of a piece with the use of his signet or his personal authorship of documents. It was also useful to suggest to his English subjects that he had not gone native in France.

The next two chapters examine the "King and the Church." The first of these, subtitled "Public Piety and Private Devotion," deals with Henry's personal religious practice. For royalty, of course, the distinction between public and private is never watertight, but Vale argues that Henry's Christianity was sincere; he was not going through the motions in order to impress anyone. We have numerous examples of Henry's public and private prayer (influenced by the continental devotio moderna), and of his frequent and generous almsgiving to paupers. His patronage of the newer, more austere religious orders (especially by founding the abbeys of Syon and Sheen) is well known; he also endowed chantry chapels and granted gifts to Franciscan friaries, and like many people in the Late Middle Ages he hoped to sponsor a Crusade. All of these actions were motivated as much by the dictates of Henry's conscience as the requirements of his public image.

The second "King and Church" chapter, subtitled "Prerogative, Power, and Papacy," deals with Henry's relations with the institutional Church, especially his enforcement of the Statute of Provisors (which reserved ecclesiastical appointments to the king) and the Statue of Praemunire (which forbade appeals to the papacy). Like other monarchs, Henry was very jealous of his control of the Church; Vale even goes so far as to designate him a sort of "Supreme Governor of the Church of England" over one hundred years before Henry VIII formally assumed the title. Unlike that king, however, Henry V had no interest in despoiling the Church - in fact, he was keen on reforming it, forbidding absenteeism, for instance, or inquiring after clerical morals. Henry's strict orders against pillaging church buildings or harming priests while on campaign in Normandy (something memorialized by the hanging of Bardolph in Shakespeare's play) won him the respect and allegiance of the Church there. He had a record of promoting literate and well-educated men to high office in the English Church - such appointments were not entirely political on his part. Finally, he took the Lollard heresy seriously, but he was no bigot about it. His reign did not see the sort of mass burnings that the French king Louis IX inflicted on the Cathars, and he often sought ways to get Lollards to recant. Historians have noticed Henry's meddling in ecclesiastical affairs before; Vale differs from them in that he sees it as a good thing, since Henry's actions were done in good faith. He genuinely cared for his Church.

Chapter six, "The King and the Peaceful Arts," examines court life, especially Henry's well-attested love of music. Whether he actually composed the two pieces attributed to him is a matter of debate; what is not up for debate is his personal ownership of musical instruments such as harps and recorders, and from an early age, suggesting that he actually knew how to play them. He certainly enjoyed listening to music, whether at court or in church, and employed many people to compose and perform for him. He also read for pleasure and instruction, and patronized writers like John Lydgate. His material surroundings suggest that the king was more than a hard-bitten soldier: sources reveal that expenditure on plate, jewels, clothing, tapestries, and furniture was enormous. But neither was Henry a hedonist: the maintenance of royal dignity was essential to medieval kingship, and something his subjects expected. There is certainly no evidence that Henry was a sexual libertine, unlike his contemporary Duke Philip the Good of Burgundy, father of some twenty-six illegitimate children.

Chapter seven, on Henry's "Last Will and Legacy," combs through his three wills and various codicils to demonstrate, again, that the king was genuinely religious. His tomb in Westminster Abbey was to house a chantry chapel, where many masses were sung and candles burned, and he left provisions for the feeding and clothing of paupers. A conclusion to the book emphasizes that Henry was not just a war leader, but had many other aspects to his character. In fact, a case can be made that he was not really a natural warrior, and that the near-fatal injuries he suffered at the Battle of Shrewsbury in 1403 left psychological scars that made him averse to pitched battle - Agincourt was the only other one that he fought. Henry's practice of war was fundamentally that of an organizer. He avoided the chevauchées of Edward III and the Black Prince, and the decision to kill the prisoners at Agincourt, an action some today have deemed a war crime, was well within military practice at the time.

As with all historical figures, the debate about Henry will go on. This book is far from the last word on him. At times it seems one-sided, even polemical, and especially in the first three chapters, that the evidence does not reveal as much as Vale would like (thus the extensive information on document production and other topics, which seems like padding). Moreover, a lot of the rest of the book does not convey particularly new material. However, Henry V: The Conscience of a King does organize this information in a novel fashion, and opens up an approach that might fruitfully be applied to many other late medieval monarchs, in England and elsewhere. It certainly provides further evidence that Henry V was indeed one of England's greatest kings.