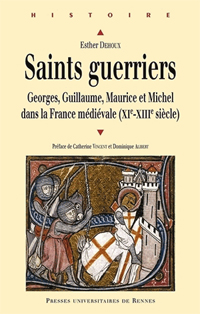 Saints were everywhere in the Middle Ages, and Christians honored them for a variety of reasons, not all of them in accord with each other. The so-called warrior saints were no exception, and their veneration was complicated by the idea that Christians were not actually supposed to fight each other. In Saints guerriers, Esther Dehoux has done a remarkable job delineating the various meanings that the cults of four major warrior saints held in France from the eleventh through the thirteenth century. Using literary sources and a corpus of 392 images as evidence, Dehoux shows how they were put to use, not only in support of crusading, but also in support of the Capetian monarchy, and of Church reform.

The papal endorsement of crusading in the late eleventh century legitimized holy warfare, and saints that aided this activity became popular in the West. By some counts over a thousand saints could be considered "military" saints, but the four Dehoux examines were actual warriors, important in high medieval France, and complementary: George, the fourth-century soldier-martyr and preeminent patron of crusading; William of Gellone (d. 812, canonized 1066), the second count of Toulouse and hero of the Chanson de Guillaume; Maurice, the third-century leader of the Theban Legion; and the archangel Michael, whom Revelation prophesies will battle against Satan in the Last Days. Dehoux has not written a chapter on each saint (unlike, for instance, Colette Beaune in Naissance de la nation France or Christopher Walter in Warrior Saints in Byzantine Art and Tradition), but instead weaves their stories together effectively in three lengthy, thematic chapters.

The first of these, "Comment faire du guerrier un saint?", delineates some common characteristics of warrior saints. In the high Middle Ages, warrior saints were usually depicted as contemporary soldiers practicing contemporary techniques: not as infantry, and certainly not as archers, but as chivalric knights. As such, they were often mounted, wielding lances and swords, and shown using the latest helmets, armor, harnesses and other sorts of equipment. Their shields, too, changed shape with fashion, and could bear various things, such as the arms of institutions they were associated with, or generic Christian symbols that later might become specific to a particular saint (e.g. George's red cross on white field). George and Maurice had both been martyrs, but this fact was quite downplayed in favor of their more active roles as holy warriors. They valorized not only crusaders, but men of war in general, who honored them as personal patrons, and who would frequently see them appear during battle. Dehoux asserts that warrior saints, especially Michael, were not simply about liberating the Holy Land, but hastening world conversion and ushering in the Second Coming. In the meantime, the romantic story about how George rescued a maiden, a person incapable of defending herself, was an exhortation for warriors to perform similar deeds.

The second chapter, "Des saints au service du monarque," asserts that warrior saints aided the Capetian monarchy, whose long-term project was to assert itself over its various dukes and counts, in the mode of Charlemagne in his own day. This idea is perhaps surprising, since none of Dehoux's four saints was royal (unlike St. Louis or, elsewhere in Christendom, St. Edward the Confessor, St. Stephen of Hungary, or St. Olaf of Norway). Furthermore, one would think that the dukes and counts, being members of the second estate, would draw inspiration themselves from saints that justified fighting. Yet Dehoux shows how the stories of George, William and Maurice all contained details that justified monarchy: George, by rescuing the princess from the dragon, restored the authority of the king of Silene; William himself defended the king and had a role in crowning him; and Maurice served in the Imperial army and was executed for disobedience, however illegitimate the order had been. Michael was in a class of his own. Once Louis VII conquered the Norman monastery of Mont-St-Michel in 1158 it became an important royal pilgrimage site and its monks actively supported the king. Michael had been the guardian of the nation of Israel; as a new Israel, France, and its anointed king, now enjoyed his patronage. St. Michael became all the more important as the English laid claim to St. George during the Hundred Years' War (a process that culminated in Louis XI's Order of St. Michael, founded in 1469).

The third chapter, "Des saints au service de la réforme de l'église," is a natural extension of the warrior saints' connection to crusading - for what was crusading, except a project of a Reformed papacy and the church it ruled? Thus, the warrior saints valorized the pope as they valorized the king. They distinguished the ecclesiastic from the layman, and justified his preeminence. Monastic prayer was combat, and the sacraments of secular priests were metaphoric weapons. The scales with which St. Michael weighed souls also pointed to the church's role in procuring salvation. The warrior saints' role in aiding the military orders valorized the church as much as it valorized fighting. These observations are good ones, but they immediately raise the question: since the reformed church was often in conflict with Europe's monarchies, were the warrior saints ever contested between the king and pope? Dehoux does not directly address this question, but it seems that there was no obvious conflict - like other saints' cults at other times and places, they could mean different things to different groups, without ever clashing. (One wonders what other groups in society, especially commoners, might have drawn from these warrior saints?)

Saints guerriers is a version of a doctoral thesis defended in 2010 at the University of Poitiers, which had to be shortened for publication - in the footnotes, and in the illustrations. The book includes a well of 16 color plates, but nothing beyond that. In a work that depends so much on iconographic evidence, this is regrettable (this reviewer wishes that the prose were more streamlined instead). But otherwise, this book is a very good one. Dehoux uses evidence creatively to draw some surprising conclusions about warrior saints in medieval France, and one looks forward to more work from this promising scholar.