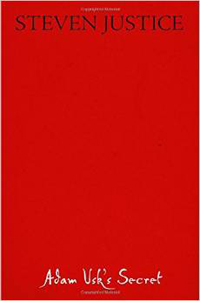 Adam Usk (ca. 1350-1430) was a Welsh priest, canon lawyer, and author of a Latin chronicle covering the years 1377-1421, itself one of the many continuations of Ranulph Higden's Polychronicon. Steven Justice, Chancellor's Professor of English at the University of California and the author of Writing and Rebellion: England in 1381 (1994) has brought his considerable analytical powers to bear on Usk's chronicle as a literary work, something previously attempted only once, and in article form.[1] Historians have long recognized how problematic chronicles are as historical sources, since they were usually written after the events they purport to describe, and under the influence of those events. (This is particularly true about chronicles relating to the deposition of Richard II, although Usk's is less biased than most.) Justice, however, is concerned with Usk's style itself, which is somewhat eccentric: his voice seems anxious and secretive, his stories often begin and do not end, he is cagey about seemingly inconsequential details but quite open about such things as rebellion and political violence. Justice wonders: what is going on here? Just what is Usk trying to hide?

Justice immediately dismisses Andrew Galloway's theory that Usk's secret was his shift of allegiance from Rome to Avignon, and from Henry IV to Owen Glendower, something for which he supposedly felt great shame. By the Lancastrian Revolution of 1399, Usk was in the entourage of Thomas Arundel, archbishop of Canterbury, and was tasked with devising legal reasons why Henry Bolingbroke should replace Richard II as king of England. After Henry's accession, Usk continued to act as a consultant for the king, but in 1402, possibly as the result of being party to a highway robbery, he left for Rome. There he found employment as a papal chaplain and auditor. But rioting forced Usk to abandon Rome in 1405, after which he began a long peregrination through France, doing legal piecework and, as we now know, receiving the bishopric of Llandaff - from the Avignonese Pope Benedict XIII! As long as Henry IV remained in the Roman obedience this appointment was merely notional, but if the revolt of the Welsh prince Owen Glendower (allied with the Avignonese French) was successful, it might have produced the chance that Usk needed to claim his bishopric. Thus in 1408 did Usk return to Wales and joined Glendower, although he claimed later that this was all a pretense; he did soon defect to "my lord of Powys" (Edward Charleton, Lord Charleton of Powys), and served under him as a chaplain until he received a royal pardon in 1411. But while Usk may have been silent about his Avignonese appointment, he did not go out of his way to hide it either: he "scatters clues" that have allowed numerous scholars to surmise its existence, long before they discovered real evidence for it. If this was a secret, it was not very well kept.

Similarly inconsequential is the affair of William Clerk, by which a clerk, in the employ of the archbishop of Canterbury, was executed by the Court of Chivalry for writing things against the king. This is the sole historical notice of the event, and of its victim. Previous commentators have therefore assumed that it must have been invented, but Justice claims that it really happened, in part because Henry IV used the Court of Chivalry to punish participants in Scrope's rebellion in 1405. But far from illustrating Henry's tyranny, the event illustrates the constrained options available to him: the Great Statute of Treason of 1352 defined the crime as actually leading a rebellion against the king, not merely saying or writing things against him. The Justices at Common Law, therefore, refused to hear the case, forcing Henry to funnel it through the Court of Chivalry - something he never tried again for mere writing. This means that Usk, who juxtaposes the event with an anecdote about how the bishop of Hereford silenced him for uttering an unwelcome opinion, is not actually expressing trepidation about potential self-incrimination in his Chronicle.

Justice examines more of Usk's juxtapositions. In one passage for 1399, after describing the coronation of Henry IV in some detail, including his promises of beneficence and mercy, Usk casually notes that Parliament condemned John Hall (a valet to the Duke of Norfolk and a party to the murder of the Duke of Gloucester) to having his entrails removed and burned in front of him, his head chopped off and sent to Calais, the scene of his crime, and his right arm set up on a spike on the London Bridge. Then, Usk relates that at the same time two of the king's valets found, in five eggs they were served, the exact likeness of men's faces - before relating that the former King Richard II was spirited away in the dead of night, weeping and wailing. Discontinuity, of course, is often found in chronicles, but when Usk creates expectations of continuity (by elaborate wordplay, for instance), they create the illusion that the author has been overtaken by unexpected events and, Justice argues, generate fear.

Justice then examines prophecy. Usk enjoyed relating prophecies, as did others in the reigns of Richard II and Henry IV. Usk's prophecies tend toward the menacing and apocalyptic, but he never elucidates what they might mean - they "teach no lesson, and suggest no conclusion about history; they suggest each merely other through the play of pattern. Instead of knowledge, they conjure sensations with no function but the beauties and terrors they can inflict on their audience" (61-62). One unlucky portent, however, about Richard II's shoe falling off at his coronation, came to have significance at his deposition in 1399 - the subject of a chapter on "Utility." Everyone agreed that Richard was "useless." Over the course of the chronicle, Richard seems to be the only one who failed to foresee his own downfall - but then he shows that he has foreseen it, and that doing so was the problem all along.

A similar ambiguity is examined in the next chapter, on "Grief." Justice posits that, when relating such events as the execution of William Sawtry for heresy or death of Archbishop Arundel, "Usk's chronicle makes expressions of grief look like a screen, but also makes grief the secret that hides behind that screen. Mechanical expressions of grief make them seem colder and less ingenuous; their apparent concealment of grief makes that grief concealed seem the 'real'" (95). This leads to what Justice calls Usk's "theory of history," in which the chronicler tries "to register grief and fear without feeling them, to register them the way formal expressions register them," for if he were to feel them, he would already be the victim of the trap and would be shamed as he was caught hoping. But this is an impossibility, because grief and fear unfelt are also unregistered, and "the proof of detachment carries the virus of attachment" (109). But this is only a program; it is not a secret.

That is revealed in the final chapter entitled, fittingly enough, "Adam Usk's Secret". Through a close analysis of the chronicle's original Latin, Justice shows that Usk's use of the dictamen functions as a commentary on the text. The dictamen was "the vocational training in the rhetoric of the letter that was second nature to lawyers, diplomats, and bureaucrats" (112) and featured a "repertory of rhythmical periods for concluding clauses, systematized and taught as the cursus" (113). Usk uses the cursus rather haphazardly, which has led Noel Denholm-Young and others to question Usk's literary competence. But Justice sees method in the madness: he claims that Usk's apparent failures are "choices, not lapses," and the presence (or jarring absence) of a rhythmic cadence works as a dramatic enhancement to the prose. Moreover, it "can do more than evoke the feeling of a mind surprised at what it hears itself saying: it can seem to provide evidence of a mind so surprised, can seem to witness a belated anxiety that forestalls the utterance intended and aborts the final cadence it was headed for" (126). Thus Adam Usk's secret: a "trick of style by which he could make his chronicle act like an unwilling informant, imperfectly concealing knowledge too dangerous to declare" (132).

This is an interesting theory, and one cannot help but admire Justice's linguistic acumen in uncovering it. The main complaint of this reviewer is that author's device of keeping his reader in suspense, waiting for its revelation in the final chapter, seems silly. Or, indeed, that it is a "secret" at all: it seems just as interesting as the other stylistic effects that Justice delineates, like unrealized prophecy or bizarre juxtaposition, but like those things more of an expressive tool than a secret as such. But if Usk's style is obtuse, Justice's is pellucid, and his exploration of his subject is certainly wide-ranging, eye-opening, and even fun. This book might not add much to our historical understanding of the reigns of Richard II or Henry IV, but it opens up new vistas onto the essential literariness of medieval chronicles. One hopes that it will inspire many more such studies.

[1] Andrew Galloway: Private Selves and the Intellectual Marketplace in Late Fourteenth-Century England. The Case of the Two Usks, in: New Literary History 28: 2, (1997), 291-318. Also appearing in 1997 was Chris Given-Wilson's edition and translation of Usk's Chronicle (in the Oxford Medieval Texts series), which contains a lengthy introduction.