Melissa Pollock: The Lion, the Lily, and the Leopard 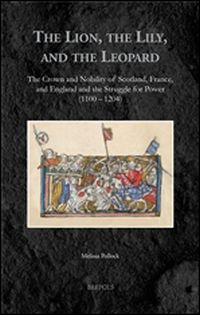 The Lion, the Lily, and the Leopard comprises a detailed prosopographical study of the family connections and landholding patterns among the nobility of the three kingdoms of England, Scotland, and France, over the course of the twelfth century. Pollock demonstrates just how "international" these connections were, and postulates that they impeded the development of a national consciousness, at least among the English. Only with the loss of Normandy in 1204 did England become "insular" once again (while the "Auld Alliance" between France and Scotland had to wait another hundred years to manifest itself). This is an interesting argument that is, unfortunately, poorly executed.

Pollock's narrative begins with King David's accession to the Scottish throne in 1124, which brought to the kingdom a new class of men whose families held land in England and in France. This pleased David's sponsor, Henry I of England, but when Henry I died in 1135, it opened up a war of succession that also divided Scotland, and had echoes in France as well. Henry II's ascension to the English throne in 1154 heralded a shift in power, since that king held both Normandy and Anjou, as well as other continental territories. However, he neither rewarded his supporters in the civil war, nor reached out to those on the opposite side, provoking discontent on both sides of the Channel, including Scotland. This erupted into a war in 1173, when the kings of France and Scotland joined Henry's sons in open rebellion against him. Henry managed to defeat this movement, although it brought together France and Scotland in a way that would come to haunt future English kings. In the meantime, Henry humiliated King William of Scotland, and drove a wedge between him and his nobles, although he also needed to retain William's goodwill, and arranged a marriage between him and his own cousin Ermengarde. This bound William closer to Henry and kept him neutral in Henry's ongoing disputes with his sons and the king of France.

When Richard I acceded to the English throne in 1189, however, he restored Scotland to its pre-1173 status, thereby freeing William's men from their oaths of personal loyalty to the English king, and welcomed the William's brother David at his court. Richard's death in 1199, however, caused another division of loyalties: Richard had named John as his heir, but had earlier designated Arthur of Brittany; many of John's continental subjects refused to accept John and threw their lot in with Arthur. King William of Scotland also sensed weakness and renewed his claim the northern counties of England, but the biggest problem of all for John was Philip Augustus, king of France, who took Normandy from the English in 1204.

Throughout all these changes, Pollock delineates individuals, families, and kinship networks who switched allegiance as they felt it benefitted them; she posits that the loss of Normandy permanently altered this state of affairs. "From 1204 onward, the aristocracy in Scotland, England, and France evolved from familiar units sharing customs and a common language into polities much more independent and separate from one another. The loss of Normandy allowed for national identity to truly begin to develop in Scotland, France, and England without the benefit of cross-Channel lordships" (416).

Discussions of the nature and even the existence of medieval nationalism frequently devolve into arguments over whether the glass is half-empty or half-full. For the period and kingdoms in question, Pollock has clearly come down on the half-empty side. John Gillingham discerned in the works of such writers as William of Malmesbury and Geoffrey of Monmouth a genuine sense of English identity among the "Norman" rulers of England by the mid-twelfth century, but Pollock's examination of actual people, and their relationships with each other, yields a somewhat different result. Perhaps some of them thought of one of their landholdings as "home," and perhaps others did not have multiple holdings at all, but Pollock has found enough examples of influential people who clearly shifted loyalties as need be, to call the whole concept of twelfth-century national identity into question. This is a valuable contribution to the debate.

As far as this reviewer is concerned, though, the main problem with The Lion, the Lily, and the Leopard is that it is essentially a dissertation, and not a book. One cannot help admire Pollock's great industry in composing it, by combing through chronicles and charter witness lists. But not all dissertations deserve to be published as they are. In this case, we have over four hundred pages of text, the vast majority of which reads like the following paragraph, chosen at random:

"The Moubray networks in Brittany were also nurtured by further marriages between the Gant and Aubigny families. Roger de Moubray's brother-in-law, Robert de Gant, provided important links by marriage to Gunnora d'Aubigny, daughter of Ralph d'Aubigny and of Sibilla de Valognes, the latter who was possibly an aunt of Philip de Valognes, the chamberlain of King William who also fought in the 1173 war. Gunnora's family were from Saint Aubin d'Aubigny (held by the Belvoir family), located fifteen kilometres east of Hédé. The Aubigny marriage put Robert de Gant into territorial networks in Brittany involving the opposition leader, Earl Robert III de Leicester (from the Beaumont-le-Roger family), for Hédé was held by Robert III's cousin" (209).

Some readers may find this sort of Kleinarbeit useful, but is safe to say that the text could have been cut in half with no essential loss of meaning - and its thesis sustained throughout, rather than simply introduced and then forgotten until the conclusion. As it stands, it is disappointing that the most poetic thing about The Lion, the Lily, and the Leopard is its title. Brepols Publishers (and the Medieval Identities: Socio-Cultural Spaces series of which this is a number) have something to answer for.