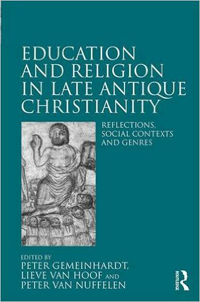 This collection of twelve articles explores its topic in the Roman world of the fourth through the seventh centuries, with greater emphasis on the East than the West. The articles are evenly clustered into four sections: Monastic Education, Gnomic Knowledge, Protreptic, and Secular and Religious Learning. "Education" is widely understood, including everything from elementary schooling to the identity-formation of the Christian community, and at various levels of sophistication.

A central problem for late ancient Christians, and a recurring theme in this volume, is that the long-established Greco-Roman literary-rhetorical education, based on the "pagan" classics, was not replaced by a full-scale Christian alternative. For socially elite and upwardly mobile Christians, the traditional education was still a necessity, despite Christian criticisms of it, both of some of its curricular content and of the "vainglory" it might induce, especially in its more advanced initiates. Hence, "teaching [and learning] could never be an unreflective practice for Christians in Late Antiquity, as they were aware of its non-Christian origins" (3). Jan Stenger examines Basil's and John Chrysostom's views on how Christians should approach the traditional education and its curricular materials, Chrysostom being more hesitant about them; Stenger concludes that in "a transitional period" neither bishop "reaches a conclusive and satisfactory result" (87, 96). The confident vision of the Christian who produced the spurious correspondence between Basil and the pagan sophist Libanius seems to be that one can fully master rhetoric without forfeiting the advantage of Christian faith (Lieve van Hoof). In religious debate, fifth-century North African bishops preferred theological / biblical arguments, but acknowledged that, in some cases, forensic / rhetorical argument, which they associated with the pagan world, was appropriate (Peter van Nuffelen). This is, in Peter Gemeinhardt's words, "mak[ing] use of non-Christian techniques of argumentation while claiming a special theological ratio for matters of faith" (109). Accommodation of the pagan paideutic legacy was the emergent trend, although with much variation in the extent and tone of that accommodation. As more people, especially the upper classes, became Christian, traditional education and the pagan classics lost much of their threat. If Konrad Vössing is correct, we can also see that perceived threat diminish in Arian Vandal North Africa when the Roman elite, who championed traditional culture, were politically marginalized along with the Catholics.

If Christians could not replace the traditional education, they could challenge and supplement it with their own formative devices. Many of the contributors address these devices. Christian formation could be effected through edifying maxims and stories, hagiography and communal history (e.g., of a monastic community), sermons, and the liturgy itself, along with prayers and hymns. Biblical knowledge was central. The Bible was taught directly, of course, but knowledge of it was also spread indirectly, through its unidentified use in a variety of contexts. [1]

Another important concern of this volume's contributors is the influence of the compositional forms taught in the traditional "pagan" schools on Christian discourse. A striking case, discussed by Gemeinhardt, is the influence of the standard encomiastic adventus oration, given upon the arrival of an emperor or other official, on a sermon of the bishop Victricius of Rouen, given upon the arrival of martyrs' relics in that city in 396. But the contributors give much more attention to maxims, sayings, and stories in Christian discourse, which parallel lower intermediate compositional exercises of the traditional schools. The Bible and explicitly Christian material naturally figure prominently in such discourse. A particularly interesting case of the distillation of the Bible into gnomic sayings is found in the seventh-century Pandect of Antiochus, studied by Yannis Papadogiannakis - a seventh-century "Bibliotheksersatz," put together at the time of the Persian seizure of Jerusalem, which Papadogiannakis treats with more sympathy than some of his predecessors. Alberto Rigolio shows how pagan authors (Plutarch, Lucian, and Themistius), as well as the Bible, could provide moralizing material appropriate for a Christian audience, in accordance with Basil's views. He studies Syriac translations from the three pagan authors that have been organized into gnomic sequences.

This volume also gives considerable attention to the world of monasticism. Section one focuses on Egyptian monasticism, with contributions by Lillian Larsen, Janet Timbie, and Edward Watts. Ancient monks did not scorn literacy as much as has sometimes been asserted; Larsen argues that "long-standing emphasis on monastic resistance to pedagogical pursuits merits re-assessment" (15). Writing had practical uses within the monastery and allowed monks to communicate with one another by letter. Reading gave direct access to Scripture. While some individuals entered the monastery with some or even considerable education, literacy could also be acquired in the monastery. Watts paints a picture of Pachomian monastic communities in which one finds informal teaching and lecturing, individually assigned mentors and teaching by the head of the monastic household. In the Syriac world, the monastic School of Nisibis "represented" in Daniel King's words, "what the pinnacle of a church-based education might achieve" (180).

[1] On this, see especially the contribution by Derek Krueger. His observation that some biblical quotes or echoes may have been heard as liturgical rather than biblical has an interesting parallel in late ancient high-register secular Atticist texts: in the latter case, echoes of classical Greek authors may sometimes have been heard as common academic property rather than as allusions to classical authors.