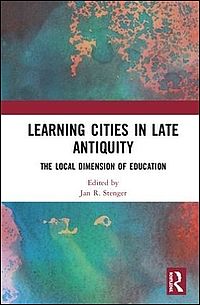 This book has eleven chapters and twelve contributors. Editor J. Stenger writes the introductory chapter and the concluding contribution; the second chapter is co-authored by three scholars. The individual contributions are of high quality; it is the overall editorial design on which my review focuses.

One cannot learn from the title that five of the chapters of this book are about the intellectual culture and education (in a broad sense) of late fifth- and early sixth-century A.D. Gaza, where there was a flowering of Greek oratory, literature, and learning. Those five chapters are preceded by I. Jacobs's contribution, "The sixth-century city in the Roman East: survival or demise of the traditional urban context?" which sets the stage. Stenger is interested, as the subtitle of his book indicates, in the cultural ecosystems (49) and the distinctive manifestations of intellectual life that appeared locally in the various cities of the Roman Empire. M. Hose's chapter describes well the importance of urban economic conditions, spaces and places, and institutions for the emergence of literature (and other cultural products). The chapters on late-ancient Gaza do a good job in painting a picture of the cultural situation there. The Gaza of ca. 500 was developing more intellectual independence from Alexandria. Town and "gown" co-existed peacefully there and propagated an "ideology of peace and harmony" (146). Traditional Hellenic culture and Christianity co-existed peacefully there among elites. So did school and monastery (on the outskirts of Gaza), with different paideutic approaches and styles of cultural leadership. There is a kind of mini-book on late-ancient Gaza within Stenger's book. It follows a wave of late-ancient Gazan studies in recent years, to which Stenger himself has contributed. Most of those studies have been the work of Italian and French scholars and closely textual. So it is good to have the Gazan contributions in this book, by scholars from other countries (F. Hadjittofi, D. Westberg, C. Tiersch, M. Champion, and Stenger himself) and broadly cultural.

Two of the chapters take us away from Gaza and back about a century earlier. T. Fuhrer explores Augustine's Carthage as both "a den of iniquity" and a pluralistic space for philosophical, literary, and theological discourse. And C. Gray observes Jerome writing to a pagan and degenerate Rome from peripheral monastic Bethlehem, trying to blend Quintilianic education with Christian asceticism for the Roman elite. So we have not only a book on Gaza within the larger book, but also an editorial inclination to want to study Gaza comparatively (15, "a contrastive comparison"). The two comparative examples are chosen somewhat randomly. It might have been more cohesive and satisfying to have remained in the East and offered a comparison of Gaza with late-ancient Alexandria and Athens. We do, in fact, find scattered comments on Alexandria and Athens throughout the book, but no dedicated discussions of them.

There is another layer to this book, the one that is alluded to in the title, the contemporary paradigm of the "learning city". Stenger invited three educationists, M. Osborne, M. Houston, and C. Lido, all of his own University of Glasgow, to explain the concept in chapter two. Learning cities - and the stress on locality is important - are places where there is a wide access to learning, in and out of the school, regardless of age, class, gender, etc. They advocate lifelong learning for adaptation to change and, indeed, promote innovation. Utilizing the Big Data of the computer age, they seek to solve social problems and stimulate economic growth, to produce "social cohesion, cultural prosperity and the empowerment of individuals" (5) and sustainable development. All stakeholders of the locality must participate to make this education on a grand scale work. Obviously, this is a contemporary paradigm. The three Glasgow educationalists and Champion assert that the concept did not exist in antiquity (42, 212). Yet Stenger is hopeful that our understanding of the ancient city may be enhanced by the paradigm of the learning city. I suspect, though, that, even if we can find hints of the learning city in antiquity, they will be so quantitatively modest compared to what we have in the modern city as to be virtually qualitatively different. It is curious that only one of Stenger's contributors - apart from the Glasgow educationists - even mentions the term "learning city," and that is Champion. He very aptly holds up the learning city paradigm to late-ancient Gaza, finding similarities and differences, but concluding that "Gaza was no learning city" (223). Stenger, I think, is over-optimistic in hoping that the learning city paradigm will shed much light on ancient cities. He also hopes, conversely, that learning city advocates will learn something from the study of past cities, including those studied in his book. For antiquity, I can imagine them being open to studying classical Athens or Hellenistic Alexandria; late-ancient Gaza would probably seem rather esoteric.

In conclusion, I warmly recommend the individual chapters of this volume as discrete contributions, but I have difficulties both with the employment of the learning city paradigm and with the editorial coherence of the book.