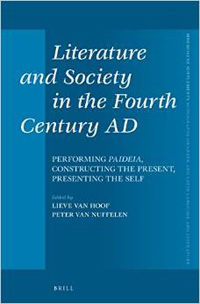 The contributing editors of this collection of ten essays want to move the study of fourth-century literature away from literary and historical analysis and from the assumption that it had withdrawn "into the classroom and reading room" (8) to an approach that emphasizes its social role and contemporary relevance. [1] They are interested in literature as "the locus of important social debates" and "the instrument and expression of social promotion" (10). Rhetorical performance (with its interaction between speaker and audience), a text's construction of present reality, and its presentation of its author are also key concerns, as highlighted in the book's subtitle. The editors' hope is that the approaches they advocate, as illustrated in the volume's contributions, will advance the study of fourth-century texts, as those approaches have already done for earlier imperial texts of the Second Sophistic.

Two contributions (Bertrand Lançon's, in French and the only one not in English, and editor Peter van Nuffelen's) deal directly with learning, especially literary and rhetorical competence, as a means of social advancement. This is actually a well-known phenomenon. Lançon's treatment of this mobility, especially into the imperial bureaucracy, tells us little that we did not already know, but is a good introduction to the topic. But van Nuffelen sheds light on a less acknowledged phenomenon, that skill in preaching could enhance the social status of late ancient clerics, both ecclesiastically and at large, and this despite the routine debunking of rhetorical skill as a vanity that Christians should avoid.

Neil McLynn, editor Lieve van Hoof, and Sigrid Mratschek consider literature - letters and oratory - as a form of lobbying the influential. McLynn shows how the bishop Gregory of Nazianzus used his correspondence with a Roman governor to further his goals, creating a relationship that was mutually beneficial. Van Hoof examines the Antiochene sophist Libanius's Oration 31, in which he lobbies the city council (and indirectly his Antiochene audience) to improve the financial condition of his teaching assistants. If this text shows that rhetoric in the middle of the fourth century did need to defend itself more, it also testifies to its ongoing value as cultural capital. A complex case involving a grounded shipwreck that was plundered is the subject of Mratschek's essay. She studies a letter written by Paulinus of Nola to an imperial vicarius in which Paulinus seeks legal redress for the ship-owner. The sole survivor of the shipwreck was a bilger named Valgius. Paulinus creates an elaborate miracle tale for this story of survival, creating a "new reality" (153) by which the vicarius is encouraged "to forget the hard facts [. . .] and allow the visual and performative flood of Christian images to take over his mind" (144). Here we have an interesting example of how "construction of the present" aids in a lobbying effort.

Literary construction and its social impact appear in three other contributions to this volume. The representation in fourth-century Christian poetry of the harmony of the twelve apostles and of Peter and Paul, as well as of the primacy of Peter, certainly served contemporary goals and aspirations, as Roald Dijkstra's essay shows. Clare Coombe studies Claudian's mythological re-making of Stilicho in his panegyrical portrayals of him: Stilicho is Apollo, Phoenix, and Tiphys (helmsman of the Argo). Such re-making helps the propagandistic poet "engage and convince a political audience" (158). She is certainly on the mark here; but analyses of the use of myth (and of history) in late ancient panegyric, even if they do not employ the fashionable term "construction," have not been wanting in existing scholarship. Finally, Morwenna Ludlow, in three case studies, looks at how in his writings Gregory of Nyssa "constructs the social and theological roles of teachers and pupils" (85). Gregory both represents the teacher/pupil relationship from his own experience and leaves texts that will influence the understanding of that relationship by others. Gregory sees the pupil as both continuing and going beyond the teacher, as both honoring and competing with him (Basil) or her (Macrina). Texts are important in Ludlow's analysis: a text (e.g., the Bible) can be a teacher, a pupil develops a voice of his own through the production of texts, and a pupil's text can keep alive his own relationship with a teacher while also offering that teacher to a wider audience.

The first contribution, by Mark Vessey, on how late Latin literature has been conceptualized in modern histories of literature, seems somewhat out of place in a volume whose agenda emphasizes the "social." So too does John Weisweiler's contribution on the fourth-century historian Ammianus Marcellinus. In three case studies, Weisweiler addresses the question of Ammianus's reliability, with reference to the issue of internal inconsistencies. These inconsistencies, of course, have already been noticed and variously accounted for. I see no immediate social ramifications in the discussion, though, only a problem in historiographical epistemology. Weisweiler's position on Ammianus's inconsistencies is that the historian is consciously playing a narratological game, hinting that there are only competing versions of history and that the reader must construct his own truth - and, in the process, deliberately subverting himself. Weisweiler's analyses are deft, but I find it hard to believe that the postmodern relativist epistemology he believes was practiced by Ammianus can plausibly be ascribed to a fourth-century historian.

The social role of fourth-century literature has not been entirely neglected in existing scholarship on late antiquity, even if the fashionable term "construction" is missing. But if this volume encourages more focus on that literature's social role, it will have been worth gathering these contributions together under the editors' methodological manifesto.

[1] Editor Lieve van Hoof had already written along these same lines in "Greek Rhetoric and the Later Roman Empire: The 'Bubble' of the 'Third Sophistic,'" Antiquité Tardive 18 (2010) 211-24.