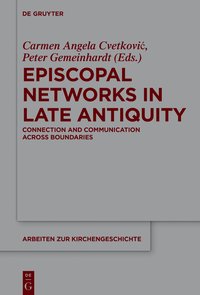 These fourteen studies, each with its own bibliography, cover the breadth of the empire from east to west in the third to sixth centuries, across cultural, linguistic, social and geographical boundaries. Contributors come from a range of European institutions and include both senior and emerging scholars. Both editors are affliated with the Georg-August University of Göttingen, where Carmen Cvetković holds a postdoctoral fellowship in the Forum for Interdisciplinary Religious Studies. Peter Gemeinhardt is well known for his work on the late antique church, its saints and martyrs, and the role of education in disseminating Christian culture in Late Antiquity.

This collection of essays on late antique episcopal networks builds on a distinctive feature of the Christianity of this time: its inter-connectivity, which is evident in the huge explosion of letters from the fourth century onwards. This is in fact a feature of Christian and pagan elite communications, as has already been noted by Scott Bradbury in his work on Libanius. [1] Many such networks are maintained by letters from, or to, Christian bishops, and several chapters focus on the individual letter-writers and actors in these episcopal networks.

Those treated in Part 1, "The Ties that Bind", include the monk Isidore of Pelusium, who is dubbed a 'quasi-bishop' (Toca and Leemans), Athanasius of Alexandria, whose Festal Letters receive a new treatment (David Gwynn), Niceta of Remesiana (Carmen Angela Cvetković), Ambrose of Milan (Ariane Bodin), Augustine of Hippo (Gillian Clark) and Ennodius of Pavia (Daniel Knox). The second part of the volume, "Episcopal Networks in Context", contains chapters on the new churches established by missions beyond Roman frontiers (Andrea Sterk), as well as the churches of Africa (Jakob Engberg) and Spain (Jamie Wood).

The authors consider the rise in long-distance communication between church elites of various parts of the later Roman empire, and other elites within and outside their own ecclesiastical and theological traditions. At a local level, we see how bishops embraced their expanding pastoral roles as teachers, defenders of the faith, patrons and religious mentors. This required interactions with individuals from diverse social backgrounds in their congregations and with secular authorities and future converts. Peter Gemeinhardt, in his chapter on spiritual mentoring by the bishops of northern Italy (117-147) points to the lack of reciprocity in some episcopal relationships that were cultivated with non-Christian elites with a view to converting them. By exploring the nature and quality of various types of episcopal relationship in Late Antiquity, the authors achieve their goal of revealing how such relationships were established, cultivated and maintained by Christian bishops, even with correspondents whom they had never met in person. As well as letter-exchange, the practice of offering hospitality and service to pilgrims helped to cement Christian relationships and offered elite women a way into episcopal networks (see Sigrid Mratschek, 149-178). Close ties could be made closer with the appointment of people within one's own kinship group to episcopal office, even if the degree of nepotism has been somewhat exaggerated in scholarship, as Volker Menze points out (19-42).

The focus of the volume is very much on episcopal agency, which may give a somewhat lop-sided picture of the epistolary, social and professional networks in this period. As noted in a volume about to appear on Greek and Latin letters of Late Antiquity, two important pagan collections of this period - those of the eminent politician Symmachus (340-402), who was a youthful friend of Bishop Ambrose of Milan, and Libanius, the Greek sophist and rhetor born in 431 - included several episcopal addressees. [2] Such cross-cultural and inter-religious interchanges are easily overshadowed by the late antique church's focus on its own institutional history and memories. It would have been interesting to learn, for example, how many people of Jewish, Zoroastrian and other religious backgrounds were included in such episcopal networks. These questions must wait for another study. Cvetković's and Gemeinhardt's volume is an interesting collection of case-studies, whose authors make significant and welcome contributions to our knowledge of episcopal agency in Late Antiquity, and how that was supported by letter-writing and other types of networking, both social and spiritual.