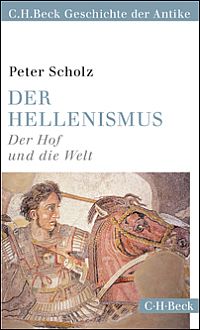 Peter Scholz, well known for his works on Hellenistic society and culture, presents a concisely written book on the period from the rise of the Macedonian world state under Philip II in the mid fourth century BC to the death of the Macedonian queen of Egypt, Kleopatra VII in the late 1st century BC. It is common practice to call this period, at least after the world conquests of Philip's son Alexander the Great (334-323 BC) and the establishment of successor Macedonian kingdoms upon his death, the Hellenistic Age. For German speakers, the noun Hellenismus carries the full force of Alexander's legacy during this three hundred year period, i.e., political, military, cultural, linguistic, religious, to name but a few key categories. Scholz's work joins an expanding list of books devoted to the Hellenistic period, and it is not an exaggeration to say that the last 30 years has been particularly rich in monographs, introductions, anthologies, and edited works focusing on Hellenistic studies.

The Hellenistic Age is frustratingly complex, and made even more so by the absence of historical narratives matching the quality and quantity of Herodotus, Thucydides, and Xenophon for the Classical period. Beyond Polybius writing in the second century BC and Plutarch in the second century AD, we have no preserved narratives of Hellenistic history after 301 BC; this source issue forces scholars to assemble a scattered array of historical fragments, inscriptions, coins, papyri, and material culture (art, architecture, archaeology) to construct a portrait of the age. One solution is to identify a common theme or themes, the goal being "die hellenistische Epoche als historische Einheit zu betrachten" (9), and this is what Scholz has done by anchoring his study in the royal courts (die Höfe), "die neuen Zentren der politischen und kulturellen Macht", and how their respective Macedonian rulers related to the larger world (die Welt), e.g., to their parasitical Greek 'Friends' (philoi); to their non-Greek subject populations, to old Greek city-states ("das ambivalente Verhältnis", e.g., Athens and the cities of Asia Minor) and to new royal cities (Antioch, Alexandria, Thessaloniki, Pergamon, conveyors of 'Hellenicity', to name a few), and to their fellow dynasts (alternating between war, peace, and marriage alliances). The rulers of this Hellenistic world may all be Macedonians originally (the generals of Alexander the Great), but each kingdom has its own unique set of challenges within its own geographical orbit. Scholz is quite correct to argue that the story of Hof und Welt needs to go back to the Macedonian court of Philip II to provide the context for the similarities and differences in the Hellenistic kingdoms of the Antigonids of Macedon, the Seleukids of Syria / Asia, the Ptolemies of Egypt, and the Attalids of Pergamon. It is quite a legitimate methodology to impose some order on this complex world, but upon closer inspection - except for topical digressions in Parts IV and VI - Scholz's work reads like a traditional diachronic political and military survey of the Hellenistic world, including a significant section (Part V) on the arrival of Rome onto the Hellenistic stage and the wars that would effectively end the autonomous kingdoms of the Antigonids and Seleukids in the second century BC. Overall, however, Scholz's book will serve as a balanced introduction to the Hellenistic world for a German language audience. It ought to be seriously considered for an advanced undergraduate or graduate course on the Hellenistic world, offering a more substantial introduction to the subject than Meissner's brief study. [1] For English readers, its closest competitor would be that of Errington. [2]

Hellenismus provides very useful reference material at the end of the book, e.g., a timeline of the most important events; dynastic lists (including many second tier kingdoms); and an extensive annotated bibliography (326-346). The index was sufficient (although I was somewhat puzzled by several split lemmata, e.g., Antiochos III and Antiochos III der Grosse <347> and Attalos, Bruder des Eumenes II and Attalos II <348>). The relevant maps are conveniently located within the chapters. Overall, the editing was very clean.

In conclusion, this book offers a thoughtful, well-researched, and balanced introduction to Hellenistic history. Peter Scholz is to be commended for introducing a wider audience to some of the most important political and cultural relationships within the Hellenistic world.