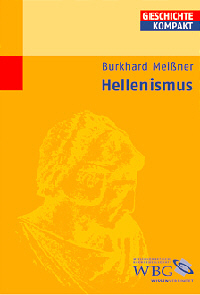 Hellenismus marks another contribution to the Compact History (Geschichte Kompakt) series that includes books on "Philip II and Alexander the Great" and "Rome and Karthage". It is intended as an introduction to the Hellenistic world for students and general readers. Meißner divides his book into three sections (with detailed sub-headings): a) a brief introduction and definition of "Hellenistic" (1-3), b) an historical survey of the Hellenistic world from the death of Alexander the Great in 323 BC to the death of the Cleopatra of Ptolemaic Egypt, the last royal successor to the Macedonian generals of Alexander in 30 BC (4-96), and c) brief discussions on individual topics, e.g., the nature of Hellenistic kingship, law and administration, economy and society, science and technology, historiography, poetry, philosophy, religion and daily life (97-134).

It was not that long ago that scholars lamented the lack of serious attention paid the study of the Hellenistic world (323-30 BC), an historical period sandwiched between the Classical age of Greece and the Roman Empire. Of course, this was misleading since serious scholarship on the Hellenistic world has been going on since the 19th century, but it is fair to say that outside of an elite group of scholars it was a period slighted, ignored, or dismissed as a pale reflection of the Classical age and dizzingly complex and incoherent. The fact that there was no continuous historical narrative preserved from its contemporaries, as with Herodotus, Thucydides, and Xenophon for the fifth and fourth centuries BC, only seemed to confirm its inferior and decadent stature. However, the Hellenistic world has become a hot topic in the last twenty-five years, and a plethora of books intended for the wider non-specialist audience have appeared. They include general introductions [1], like that offered here by Meißner; "companions" [2]; and anthologies of primary sources in translation. [3]

What then does Hellenismus offer? For the German language audience, it is a smart and accurate introduction to the Hellenistic world. There are no radical theories that depart from the communis opinio - it is an introduction, after all, not a monograph or dissertation. Particularly useful are the inserted translated document excerpts that add clarity and immediacy. These include a range of primary sources, e.g., inscriptions, papyri, and ancient historians (particularly Polybios, our best contemporary historian for the third and second century BC, but whose work is unfortunately not complete). Also, the inclusion of chronologies that fit the related chapters are helpful (although a comprehensive one at the end would merit consideration).

What then does Hellenismus not offer? First of all, there are no maps (except for a city plan of Alexandria [105]), no dynastic genealogies, and no kings' lists. I appreciate the need to keep the length of the book within the parameters of the Compact series, but these critical apparatuses are essential to understanding the vast cast of characters that appear on the Hellenistic stage. How can a student make sense out of references to kings and queens with shared names of four different Hellenistic dynasties without visual connections or to locations mentioned without a map? Secondly, the topics in Section III are too brief and generalized to do them justice. Finally, this book will not break into the English language market for the simple fact that there are now plenty of alternatives in English covering the same material.

The book was carefully edited; I found only a few typographical errors in the bibliography, e.g., 135, 136, 137, and an inconsistent citation for two entries for Scholten (138).

Overall, I am delighted to see another contribution to the study of the Hellenistic world, and Burkhard Meißner should be applauded for his efforts to introduce another generation of German students to the subject.