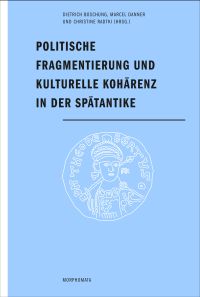 This book is the result of a conference with the same title, which took place in Cologne in 2012. A significant number of the original contributions could not be published in the volume (for the list see 9 note 7), but the work has maintained its original purpose: to show the limited impact of the political events of the Late Antiquity, especially the barbarian invasions, on the kulturelle Kohärenz. Most of the essays concentrate on the period from the fifth to seventh centuries. The change from the globalization of the Roman Empire in Late Antiquity to the regionalization of the Early Middle Ages is well highlighted, especially in the contributions on economics and material culture.

Meier's introductory article is the forma brevis of his contribution to a volume on Clovis that he has recently edited (M. Meier / S. Patzold [Hg.]: "Chlodwigs Welt. Organisation von Herrschaft um 500", Stuttgart 2014, which I have reviewed in KLIO). The essay explores the significance of the year 476 as the historic caesura that signaled the end of the Western Empire. The political developments of the Eastern Empire, the Kingdoms, and the Papacy are blended in a deep, multi-dimensional analysis. The question of the growing political power of the Roman Church - starting with the ideas of Augustine, through the sack of Rome, and concluding with the letters of Pope Gelasius - is particularly well approached.

Radtki's contribution focuses on the representation in imperial style of the Gothic King Theoderic. Perhaps relying too much on the questionable theory of J.J. Arnold 2014 ("Theoderic and the Roman Imperial Restoration", Cambridge), that Theoderic's Roman subjects saw him as a Roman Emperor, the author gives a view of the question of the adoption of imperial models in Ostrogothic Italy. Much literature is missing (e.g. A. Giardina, "Cassiodoro politico", Roma 2006; M. Vitiello, "Il principe, il filosofo, il guerriero: lineamenti di pensiero politico nell'Italia ostrogota", Stuttgart 2006, 23-110). Nearly 1/5 of the contributions in the final bibliography are not to be found in the footnotes.

Brennecke offers a more focused contribution that analyzes the political role of the various Christian creeds in the Empire, with particular focus on the East, showing how religious confessions were used for political purposes by emperors and usurpers in the struggle for power. Two essays on the economics of the post-Roman world follow: Sarris considers "economic Romanitas", highlighting elements of continuity with the late Roman Empire. This piece has a strong focus on agricultural society, on the continuities of the power of Roman aristocracy, and on the development of the clergy. Carlá discusses the monetary system, in particular the circulation of gold and the introduction of national barbarian gold coinage in the late sixth/seventh centuries.

With the contribution of Deliyannis, the focus of the volume turns to material culture. The analysis of literary evidence (including inscriptions) concerning church-building in the Mediterranean world after the conversion of Constantine shows how both rhetoric and reality informed Christian architecture; the contrast between rich and poor, monumental and simple, is traced back to the Scriptures. The essay of Danner concerns topography, exploring the continuity of houses in the fifth and sixth centuries in four different contexts: Rome, Ostia, Carthage and Antioch. The author sees economic factors as more influential than the invasions in shaping developments in housing.

Baratte's essay offers an overview of the history of silver vessels as symbols of power in the East and in the West, through the analysis of many exemplars. Pinar Gil examines the spread of ornamenta, especially brooches, and the question of whether elites in the post-Roman world introduced these adornments or adopted them. This contribution includes observations on the thought-provoking book of Ph. von Rummel ("Habitus barbarus: Kleidung und Repräsentation spätantiker Eliten im 4. und 5. Jahrhundert", Berlin, New York 2007). A final article by Fisher offers an overview of post-Roman and early Byzantine weapons, considering influences from the Sassanian Persian world, though generally noting similarities in weaponry between the Empire and the kingdoms.

On the whole, this book leaves a positive impression. The editors have done a commendable job of collecting and trying to amalgamate a set of interdisciplinary essays by scholars with very different methodologies. However, the volume has little internal Kohärenz: some of the essays are highly specific and detailed, with full bibliographies, while others take a very broad approach; two of them, perhaps the strongest ones, are translated and abbreviated versions of more detailed works published elsewhere in a different language. In terms of style, it is surprising that only part of the essays include an abstract; the same is to be said for the fazit at the end. Therefore, it remains unclear to the reviewer which kind of audience this collection aims to reach.

These criticisms do not negate the volume's overall success in achieving its main goal, which is to shed more light on the gap between the histoire événementielle and the slow process of transformation of culture.