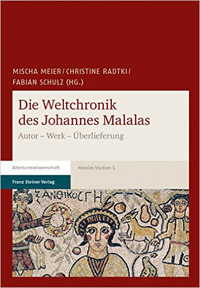 Byzantine chronicles, for so long ridiculed as the trivial works of ignorant monks, have received two major collaborative studies which reached me within a couple of weeks of one other, each a product of a conference hosted by a major centre; first Studies in Theophanes ed. Marek Jankowiak and Federico Montinaro (2015 but in reality early 2016) based on a Collège de France conference in 2012 (some 24 papers, 516 pages), and now from a 2012 Tübingen conference this first volume of at least ten promised through a remarkable Heidelberg Academy 12-year grant for Malalas studies. This latter grant is all the more remarkable given that Malalas' chronicle has been ridiculed continuously from before its first edition in 1691 even into this century. Thus Humphrey Pridaux (1648-1724), before withdrawing from what would have been the first edition, stated in 1674 that 'I now sufficiently know him to be a horrid, musty foolish booke, and many degrees below the worst of authors I have ever met with. I wish I were rid of him', while Warren Treadgold in 2010 refers to him as a fraud and a charlatan, with only slightly less extreme criticisms made by any number of scholars in the intervening centuries.

Added to such criticisms are the problems of the text itself, a 6th-century work that appeared in at least 2 editions (ending ca 532 and 565) surviving in a single but manifestly abbreviated 11th- or 12th-century manuscript, Oxford Bodley Baroccianus 182 (B), but seemingly quoted or used in greater detail by at least fifty later works writing in various languages, each with access to a longer or complete version, so posing such difficulties of interpretation that the great Krumbacher announced in 1901 that his Byzantinische Zeitschrift would not publish anything further on Malalas. That more or less remained the situation until 1986 when an Australian translation, by using English as a neutral language, in effect provided an equivalent of a critical edition by adding to a translation of "B" a critical apparatus that incorporated what could be added from later users. The same team also provided a volume of studies on Malalas in 1990, followed at last by Hans Thurn's first critical edition, sadly published posthumously for Corpus Fontium Historiae Byzantinae in 2000, and later by two volumes of French studies, led by Joëlle Beaucamp, in 2004 and 2006 and a German translation, undertaken by Thurn and completed by Mischa Meier in 2009. Meier, who has already adequately restored Malalas' significance as a source in his Das andere Zeitalter Justinians (2004) and elsewhere, now leads a team inviting specialists to annual conferences on Malalas for the next ten years (with each conference to result in a further volume of Malalas studies) as well as producing an historical and philological commentary. At the time of writing the latter has produced online a commentary covering roughly two-thirds of Malalas, Book 18 (with which it began, being by far the longest book), at http://www.haw.uni-heidelberg.de/forschung/forschungsstellen/malalas/online-kommentar.de.html. A volume from a second conference, held in 2015 on Malalas' sources, is in preparation, and a third conference is scheduled for October 2016 on "Malalas and the culture of memory in the 6th century AD". Overall the study of Malalas has moved from Krumbacher's 1901 prohibition to a remarkable situation where Malalas has become Byzantium's most published historian and arguably its most studied author.

This lengthy background is needed to appreciate this volume's significance. Its 15 papers, together with the historical and philological commentary, already justify the grant. The papers here are grouped in three sections, the third being subdivided into two parts: 1. Malalas - Person, Werk und Umfeld; 2. Die Gattung der Chronik; 3. Zur Überlieferung der Malalas-Chronik, (i) Handschriften, (ii) Literarische Beziehungen. Each paper represents worthy new research, but as much as providing answers each also raises a whole series of new questions, especially from the interaction between the various sections. Thus Elizabeth Jeffreys, reflecting on the complex textual problem of the manuscript tradition (and on western mediaeval scholarship that has not reached Byzantinists), asks if we can ever attribute ownership of the text to any one individual, but also notes that there does seem to be an individual personality involved with a particular idiosyncratic set of interests. That gains support from Catherine Saliou on the treatment of Antioch stories, from Anne-Marie Bernardi's and Emmanuèle Caire's analysis of narrative, and Philippe Blaudeau on coherence of Justinian's image between the first and extended edition, all suggesting there is a distinct individual underpinning the narrative. But doubts on this are further brought out by Geoffrey Greatrex on "Malalas and Procopius" suggesting that much of what may be missing from what we have of Malalas, (50% surely exaggerates) may reflect changes in what was regarded as relevant (and hence worthy of preservation) by later Byzantines (though his important claim that this explains Malalas' apparent lack of interest in the West surely fails since Theophanes, with access to a virtually complete version and a clear interest, is just as unaware as "B" on the West). These papers interact with the opening papers on the author. There Johann Martin Thesz challenges the notion that Malalas may have had a classical education where others have assumed his name "Malalas" implied a legal training necessarily involving such a background (though his name may just mean "garrulous"). Volker Henning Drecoll, likewise in the section on "person", maintains that Malalas remained religiously neutral in the Chalcedon-miaphysite dispute, whereas Fabian Schulz argues on the basis of the Tusculan palimpsest fragments (6th or 7th century) that the Theodosius apple story in Book 14 originally reflected a miaphysite version. But here Christian Gastgeber, in exploiting Chronicon Paschale to reveal the first edition, still also used by Evagrius in the 590s, (whereas "B" is based on the later extension), also points out that these Tusculan fragments are already reproducing the revised version, so correctly and properly complicating the whole issue. So the 9 papers referred to above, each a worthy and novel contribution in isolation, interact to produce complexities that need further discussion and, one hopes, resolution. A great value of a 12-year project is that it allows for a later return to these issues and their eventual solution and incorporation into the commentary, ultimately the project's most valuable aspect.

I have not done justice to any of the above 9 papers nor do I have space to give proper attention to the other 6. Of these 5 examine aspects of the use of Malalas by later authors and their significance either for establishing the text or the influence of Malalas on a later text: Erika Juhász on Chronicon Paschale; Pia Carolla on Excerpta de Insidiis; Sergei Mariev and Umbert Roberto separately on John of Antioch; Dariusz Brodka on Nikephoros Xanthopulos Kallistos, so all drawing attention to the complexities of the textual tradition and significantly enriching our knowledge. Again there will be a need to incorporate these enrichments in both the historical and philological commentaries.

That leaves Richard W. Burgess and Michael Kulikowski who were invited to discuss whether Malalas actually wrote a chronicle. In line with their crusade, Mosaics of Time (2013), they argue that neither Malalas nor virtually any other accepted Byzantine chronicle meets their criteria of noting each year and stressing time rather than event. An appropriate response is needed but not feasible here, but their neglect inter alia of Elizabeth Jeffreys' demonstration of the centrality of time calculations for Malalas needs stressing, as does wholesale verbatim copying from one chronicle to the next across several centuries (Malalas, Theophanes, George the Monk, Ps-Symeon, Symeon Logothete, Kedrenos etc.), demonstrating a far clearer generic link than exists between Herodotus, Thucydides and Polybius, accepted as belonging to the single History genre by Procopius, Agathias and everyone since. In essence the chronicles are a group of linked texts spanning several centuries that clearly belong to a single genre for which the most suitable descriptive term is chronicle (a term used by most, though elsewhere than in their titles), irrespective of how that term is applied elsewhere.

Editing has let slip some careless author errors (e.g. page 78 "Eustathius of Epiphaneia" for "Hesychius of Miletus"; page 187 "528" and "530" for "628" and "630"; there are others) but none will bother experts and are compensated for by the speed of publication, within 2 years of the conference, of this rich collection which, while advancing Malalas studies, also reveals that there is much to be done (and worth doing), which is entirely appropriate at the opening of a 12-year project.